BREAKING NEWS OR MAYBE NOT: THE NUPTIAL MASS WILL EXPERIENCE A MAJOR CHANGE SOON BUT MAYBE NOT!

JUST REMEMBER FOLKS: YOU READ IT HERE FIRST! THE NUMBER ONE NAME IN CLAIRVOYANCE AND BREAKING NEWS--BUT MAYBE NOT! 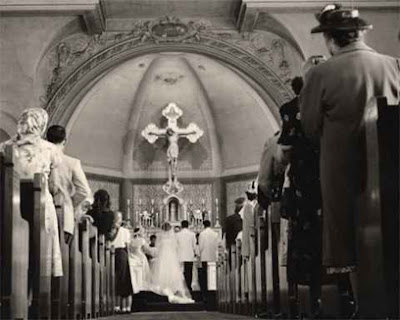 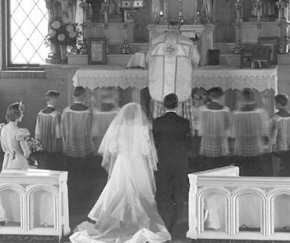 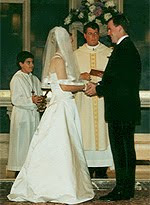 As you know I am clairvoyant, but maybe I'm not. Yesterday while studying the Corrected English translation of the new Roman Missal, I discovered something that really puzzled me.

The new missal for the Nuptial Mass states in the rubrics that the Penitential Act is omitted but the Gloria is said or sung. That is new! Normally for Nuptial Masses, the penitential rite is said or the rite of sprinkling can be used as an option with that rite's absolution. Normally, the Gloria is not said or sung because it was never clear in the rubrics that it should be. That has now been very much clarified.

But what is so bizarre is that the Penitential Act is omitted. How do you get from the greeting to the Gloria when there is not an intermediate rite, either penitential or sprinkling? There are no words given in the missal to do this which means that the revised "Rite of Marriage" has the words but this revision has not been leaked and there is no date for it to be released and implemented. We just know that it will be or is being revised.

Now this is where I start putting two and two together. As you know I'm clairvoyant but maybe I'm not so keep that in mind as I explain the following!

The Marriage Rite is being revised. This is fact, not clairvoyance on my part. No one has seen any revision, but the order of the Nuptial Mass or the Nuptials outside of Mass is being revised and has been in process supposedly for years. But evidently it is top secret since I've seen no interest in leaking anything that is being redesigned. So much for transparency, so thank God for my charism of clairvoyance!

So this is my take on the peculiar directive in the new Missal as it concerns the omission of the Penitential Act but the saying or singing of the Gloria and this is really a clairvoyant moment for me and putting two and two together:

Keep in mind that the Extraordinary Form of the Nuptial Mass has the "Rite of Marriage" as a prelude to it, as a distinct ceremony, just like the Rite of Sprinkling Holy Water in the EF is a prelude not integral to the actual Mass. The revision of the Rite of Sprinkling in the OF Mass incorporates it into the Mass in place of the Penitential Act. So this is what I predict is going to happen with the Nuptial Mass, the Rite of Marriage will be incorporated into the Nuptial Mass, but now in place of the Penitential Act and not after the homily! Thus we have the hermeneutic of reform within continuity!

The other thing that makes me think this apart from my supposed clairvoyance is that in the Funeral Mass, the rite of welcoming the deceased and the family, sprinkling the coffin and covering it with the pall and any other options at that time, replaces the Penitential Act. Of course the Gloria is never said or sung in a Mass of the Dead, so after the priest reaches the altar and goes to his chair, he simply says or chants the Opening Collect.

I'm also predicting that this same order will be in the Rite of Marriage outside of Mass. You will have the opening greeting, exchange of vows and rings and opening Collect. Then you'll have the Liturgy of the Word, homily and conclude with the Intercessions, Nuptial Blessing, Lord's Prayer and Final Blessing/Dismissal. But keep in mind, maybe not!
Posted by Fr. Allan J. McDonald at Saturday, November 19, 2011

I am not a Novus Ordo hater in principle, but one thing I have always hated about it is The Penitential Rite. Turning what was a private soft-spoken preparatory devotion of the priest into a common rite was the most Protestant and irritating of all the changes.

And it is an occasion of sin. Every time I had to endure it, I thought of Paul VI in purgatory...an uncharitable thought to which I gave full consent of the will.

It's like slamming on the brakes just as the rite is gathering steam, plus it encourages a pointless individual introspection in common (sic) and then is followed by a non-sacramental non-absolution...

Entrance hymn of joy and or praise, greeting from the Trinity, then, let's stop and think of how bad we all are...tic toc tic toc...aaaand then let's go back to what we were doing.

Its placement is the worst thing about it. If they had moved it, say, to after the Prayer of the Faithful or someplace like that, it would not have been so irksome.

I find the idea that a married couple's first act together is to sing the Gloria to be both charming and delightful. I understand the logic of excluding it from the E.F. nuptial Mass (all that stuff about solemn and simple votives), but with the more 'relaxed' attitude to such matters of the O.F. it seems the most natural way of running things.

Not sure how they did it, but when my daughter got married this year she worked with the priest to ensure that she and her husband were married before communion. She's old school to be so young. Not sure where she gets it.