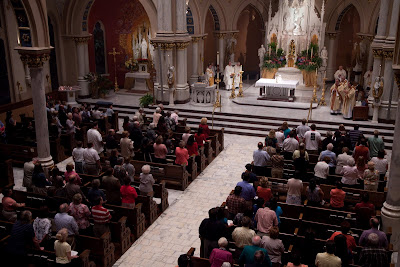 I have a confession to make. I love the Extraordinary Form of the Mass for a number of reasons. It is beautiful and historic and brings me back to my Catholic roots, formative years and sense of the sacred. In fact as an adult, the sense of the sacred that I learned came mostly from the time before Vatican II, up until I was about 13 or 14 when Vatican II actually made inroads in my local parish of St. Joseph Church in Augusta, Georgia.

However, the first changes in the Mass where terrific in my 13 year old mind and eyes. The EF Mass was said facing the people, but all the ceremonies and reverence as well as rubrics were kept in tact. Gradually parts of the Mass, those spoken and heard by the congregation were said or sung in English. I thought that was great. The Eucharistic prayer though was still prayed quietly in Latin as were all the quiet, devotional prayers of the priest. The lectionary was read from the ambo and in English, not from the altar in Latin.

Things began to disintegrate when confusion concerning liturgical music entered the picture. Based upon the Council's desire that the congregation participate in everything externally and inculturation be allowed, musical idioms of a popular nature were introduced to the Mass, not for the Mass parts themselves, but for the hymns which are appendages. Folk music took root in the Diocese of Savannah, choirs disbanded and ensembles placed to the side of the altar proliferated and in the style of bar room entertainment.

I would have to say that Folk music and folksiness derailed the Liturgical renewal for all of this led to a loss of reverence, awe and respect for the sacred mysteries celebrated. Reoriented traditional churches with seating around the altar to promote folksiness and casualness in worship in an iconoclastic way, removing the tabernacle from its original prominence and chatter and bantering in the church's nave before and after Mass reduced the "sacred space" to a gathering area for the most banal of activities and conversation that really should have been accomplished outside or in the social hall.

I can remember folk group members living it up in the church at their rehearsals and that some even smoked in the church--of course that was addressed quickly, although I do remember in the early 1980's when I was visiting St. Peter's Basilica, a man was smoking as he toured. I prayed he wasn't a Catholic but only imbecilic.

None of the negative things I just highlighted, though, are to be found in any of Vatican II's documents on the liturgy or the nature of the Church or official documents from Rome after Vatican II that revised the Mass. The silly derailing features of the post Vatican II renewal came from the dictatorship of liturgical and music theologians and the loss of leadership of national bishops' conferences which issued decrees concerning music and architecture which were then followed as though these were infallible papal decrees, which of course they were not and Catholics had a right to actually dissent from them.

I can remember attending the National Federation of Diocesan Liturgical Commissions' convention in Portland, Maine toward the latter part of the 1980's and being thoroughly disgusted with the power that liberal diocesan liturgical commissions wanted to wrestle away from the Vatican and bishops themselves. They were a bunch of "know it all's" who wanted to fashion an iconoclastic American liturgy devoid of any of Western Europe's negative accretions over the years and interference from Rome or local bishops. That tells you a lot. At the same time, I was vocation director for our diocese and attended national conferences of vocation directors and found the priests and others at these conventions "real" and concerned about the Church and not their own agenda and power. I never went back to another Liturgical convention, but thoroughly enjoyed the Vocation Conventions each year I was vocation director, from 1986 to 1998.

Today, we are recognizing that the Post Vatican II Mass in the vernacular is indeed a gift to the Church. But it needs to be beautifully celebrated and with great reverence and in continuity with the Holy Mass from which it evolved. It can be celebrated ad orientem and traditional churches are once again being built and ones that were gutted are being restored. Even ugly modern churches are being updated with a more traditional flair and tabernacles are being placed back in a more prominent place, dead center in the sanctuary.

Music is improving too. There is now a great school of thought that says the official Introit, Offertory Antiphon and Communion Antiphon should always be chanted either by the choir, the cantor or by the congregation and not eliminated because a hymn of another type is chosen. Doing this is actually singing the texts of the Mass, not inserting hymns that are extraneous to the texts of the Mass by substituting pious hymns no matter how beautiful for the official chants. The parts of the Mass, from the priest's greeting to his collects, preface and introductions to prayers are encouraged to be sung as are the Gloria, Responsorial Psalm, Gospel acclamation and Gospel itself, the Credo, Intercessions, Sanctus, Mystery of Faith, Great Amen and Lord's prayer with its embolism and the Agnus dei. The corrected English Roman Missal also has music for the congregation's "Lord I am not worthy!"

It does not take a rocket scientist to make the Post Vatican II Ordinary Form of the Mass beautiful and sacred and within continuity with the Extraordinary Form of the Mass. It takes care and understanding of what the Roman Missal and its general instruction actually say about its celebration and having competent people to choreograph the Holy Mass and orchestrate the singing of the Mass.
Posted by Fr. Allan J. McDonald at Wednesday, November 09, 2011

Fabulous explanation!
I hope a previous respnder to this blig shares it with his prayer/Bible group that had a big discussion about this.
It's a different way of looking at the Mass and V2 than the 'what's in it for me' angle.
~SqueekerLamb

Excellent post, Fr. This is likely to be the outcome over time, if the College selects a Pope to follow BXVI who would continue this reunification. I have been reminded over the last year that many of our most venerable persons were young twenty and thirty yearolds hot in the middle of the groups you note that brought this rupture. To my surprise they are personally and deeply offended by this change. As is often the case with zealots, they do not want their own lattitudes so much as to suppress others. So, perhaps, as you are sometimes clairvoyant, the Pope was prophetic when he said the Church would have to get smaller to get larger.

You can make the OF as reverant as you like (possibly can) and we can not escape the fact that the Mass was designed by a committee, and insituted poorly and non-organically. Any attempts to improve it by dragging it "back" to be more in continuity with the TLM ignores the fact of how it was created and instituted. The reform called for by V2 was intended to take the TLM and move it forward, not create something from nothing and then try and fine tune it to be acceptable. The OF can never be "fixed" by the very nature of how it was created.

Templar, in many ways we are blessed the TLM was not subjected to the post-Vatican II reworking as contemplated by the Council. With the creation of the Novus Ordo, the TLM was able to continue to exist unadulterated and free from the influence of the Council. Perhaps Divine Providence intervened in such a manner to rescue the beautiful Mass of the Ages from the snares of Modernist influenced liturgical movements of the 1960s and 1970s (and continuing today in many ways).

I don't disagree Marc, we are very fortunate, but it's speculation. We could as easily speculate that if V2's reforms had been implemented as intended we'd henevr have gotten to this point at all. We may never know.

Templar, whenever I think something is unsalvageable I read the Book of Ruth. This may be a demonstration of how we can't save it, but the presence of Jesus does. Just a thought.