SHAWLNANIGANS AT MACON'S ORDINARY FORM MASS; FACES ARE BLURRED TO PROTECT THE GUILTY!

The blurry deacon was preaching that Sunday. Can you guess what the Gospel of the day was and what the celebrant, whose name will go unmentioned, is wearing? Would this be done an an EF Mass, I ask in good fun of course? 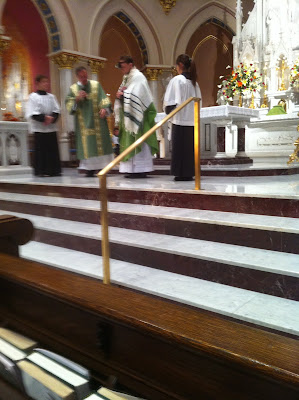 Fr. Dawid, in a Jewish prayer shawl? I won't venture to guess the date or the readings.

"They widen their phylacteries and lengthen the tassels on their shawls."

Tassels: A tallit (Hebrew: טַלִּית‎‎) (talet[1] in Sephardic Hebrew and Ladino) (tallis,[2] in Ashkenazic Hebrew and Yiddish) pl. tallitot (talleisim,[3] tallism,[4] in Ashkenazic Hebrew and Yiddish) is a Jewish prayer shawl. The tallit is worn over the outer clothes during the morning prayers (Shacharit) on weekdays, Shabbat and holidays. The tallit has special twined and knotted fringes known as tzitzit attached to its four corners. The tallit can be made of any materials except a mixture of wool and linen. Usually, the mixture of wool and linen - a combination known as shatnez - is specifically forbidden by the Torah. In the case of Talit however, this is a Rabbinic prohibition, because biblically, the mixture might be allowed for a Talit during the daytime (however at nighttime there would be a transgression on behalf of the wearer).[5] Most traditional tallitot are made of wool. Tallitot are often given as gifts to children on their Bar Mitzvahs. In many orthodox circles, a Tallit is customarily presented to a groom before marriage as part of the dowry.

So, in what world is this okay? Seriously, I'd like to hear the justification.

There is a great deal of flexibility in creating and delivering a homily, and visual effects are permitted, like "show and tell." I can remember in the late 1950's the pastor of the army chapel our family attended at Fort McPherson , GA using stories of Mr. and Mrs. Spaghetti Bender. He was hilarious and people were laughing out loud and as a little Italian child at that time who loved and still loves his spaghetti, I thought he was cool.

Never at an EF! Thanks for your blog, excellent in every way.

Since I prefer my Holilies to be focused on serious matters, like say the Final Four Things and the Salvation of Souls, I find I do not appreciate the "show and tell" aspects when employed. I find they contribute to the general lack of reverence that inflicts the Mass these days.

Don't get me wrong, I appreciate a Priest with a sense of humor, in fact they're a God given gift, but inside that Sanctuary I prefer they behave with the dignity befitting the location.

Once again, Templar comes to my rescue and expresses my point for me! This situation involves not only the homiletic aspect, but also whether it is prudent to dress a Catholic priest like an Old Testament Jew.

"Shananigans" is an accurate way to describe this and shananigans have no place in the Mass whether it is Novus Ordo or Tridentine.

When I heard about this "homily," I was relieved I didn't happen to go to the Masses that Sunday at which this deacon preached. Just unbelievable.

I tend to be a very traditional person, but I see no problem with show and tell during the homily as long as it is relevent to the readings. The recent Mass readings include references to jewish traditions and objects that most Catholics have never been exposed to. Greater understanding will be achieved by seeing the actual object than by "seeing" a somewhat flawed idea of what the object might look like inside our minds.

Carol, I agree with you. Many people commented after the Mass that they had never understood any of these things that we hear regularly in the Gospels and that Deacon Don helped them to know what these readings are speaking about. It was a great catechetical moment and opened many eyes, like Jesus did when he used his saliva to make a paste of mud to smear over the blind man's eyes. He slowly gained his eyesight, but it is also a metaphor for one slowly gaining faith over time and seeing things through the eyes of faith. I would suggest that for those who are less than sacramental when it comes to poor deacon Don's show and tell. (sacramental with a small "s"! :)

The show and tell is not the issue. He could have displayed the shawl. Instead he dressed a Catholic priest in the shawl. That is what I am taking issue with in my comments.

The Catholic priesthood as instituted by Christ the High Priest and thus a capital "S" Sacramental image of Him comes from two central institutions of Judaism, that of the "inherited" priesthood of the temple and that of the teaching role of the Rabbi. The vesture of the rabbi and perhaps even the Jewish priest is certainly within the hermeneutic of continuity of the Catholic priest today as capturing the Jewishness of Jesus' High Priesthood and High Rabbinic mission and was made wonderfully visible in a little "s" sacramental way during that homily. I hope people made connections.

I will relent and reconsider my opinion based on what you've written, Father. Thank you for explaining.

Catholic worship and liturgy recapitulate, in many ways, the worship of Israel. A theologian whose name slips my memory, once said, "If Jesus Christ was to return to earth today, the only things he would recognize would be the Catholic Church and the Jewish Synagogue." I see nothing wrong with a concrete reminder of our Judaeo-Catholic heritage.

It is not only Old Testament Jews who wear the phylacteries and tallit (not "shawl). These are worn by Orthodox Jewish men today.

I have seen this very display before and heard explained in exactly the same way. It was from a very conservative French Canadian priest who led a parish I lived in years ago. I had the same reaction as everyone here, but Fr Jacques (I kid you not) explained it the same way as Fram.