MORE SHAWLNANAGINS AND CANDID CAMERA IMAGES CAUGHT BY MY SPIES

The pictures speak for themselves; all truth is revealed! Oh, the humanity of it all! 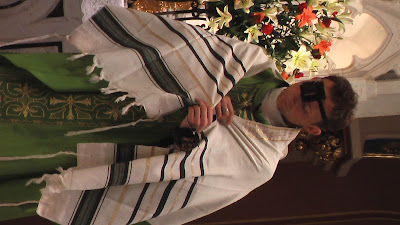 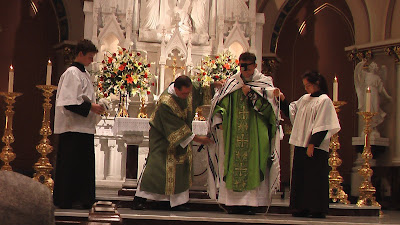 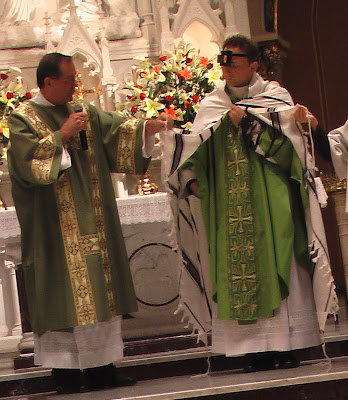 I just have to point out that the mere fact that people in the pews were taking pictures of this "demonstration" (presumably with their cell phones) during the Holy Sacrifice of the Mass tends to strenghthen my argument that these sorts of shenanigans shouldn't be done during the Homily whether they illustrate an important historical aspect of our Catholic faith or not. But, then again, this was a theatrical stunt, so it makes sense people would want to capture it.

It was a teaching homily that captured people's attention, thus the photographs because of its unusual nature, but still, I believe, within the parameters of what is possible for homilies,both in the EF and OF Masses.

I agree with you and Fr. Dawid - there is no better way to demonstrate what the phylactery and tassels alluded to in the text are than show them (mindful that the orginal passage was written to Jews living in ancient Palistine rather than residents of Macon in 2011 who may not otherwise get the point.)

BUT, in saying that, I think that putting the pictures on the internet opens up Fr. Dawid to ridcule and abuse, especially by the radical Traditionalists who espouse anti-Semitism.

To be truly candid, I was dressed up by the deacon in a similar fashion at the 9:30 AM Mass that Sunday. Unfortunately, no one has sent me any pictures which I would post if I had them.

I do think that some of these pictures ended up on face-book, but need to be viewed in the context of what it is, an explanation of these garments that Jesus narrates in that Sunday's particular Gospel.

I found it very eye-opening and gave me a never-before- awareness of just what Jesus was talking about. It was an a-ha moment.

I find the use of the phylacteries and tallit entirely appropriate in a homily based on a Gospel passage which specifically mentions them.

All good liturgy has a decidedly theatrical aspect - it is supposed to engage the human senses since it is through those senses that we come to experience salvation.

If the use of religious symbols engages the senses in a way that deepens understanding, then they have been used well.

Kudos to the Klergy on this one.

Maybe this is an older way of understanding things, but I've always held the notion that the homily (or sermon--as it is referred to in many pre-Conciliar books) is a hiatus or "break" in the liturgical action or ceremony. This might explain the older practice (as in the EF) of the priest removing the maniple and leaving it on the Missal on the altar to go preach the sermon.

I have even seen older depictions and films of priests with their chasubles removed as well for the homily or sermon, preaching only in alb and crossed stole, sometimes even wearing the biretta while preaching.

And, by the way, during this break in the liturgical ceremony, why not, as a part of the homily, use actual items as "demonstrative evidence" to illustrate what is meant in the Scriptures?

Just as prescribed "externals" in the liturgical ceremony (such as good Church art, ad orientem, reverent handling of the Blessed Sacrament) can aid our understanding of the Mass (the Mass as catechetical, in and of itself)why not physical things to aid instruction in the homily (or sermon)?

I don't know. I think this sort of thing is at risk of moving into what Pope Benedict in the The Spirit of the Liturgy characterized as religious entertainment.

But perhaps the interval of the homily does qualify as a break or hiatus.

I will not consult a liturgist.

Bill,
Why not consult Fr. Zuhlsdorf ("What Does the Prayer Really Say?) or, maybe a "traditionalist" priest, say the FSSP (Priestly Fraternity of St. Peter)? I heard this idea of the "break" during the homily expressed by a priest once during an EF Mass.

Consult the GIRM - the homily is an integral part of the mass, not a "hiatus."