It is purely coincidental that this modern Ultramontane art piece resembles the Krystal Katholic Kathedral above--it must have been a premonition of what I would post later in the day above! 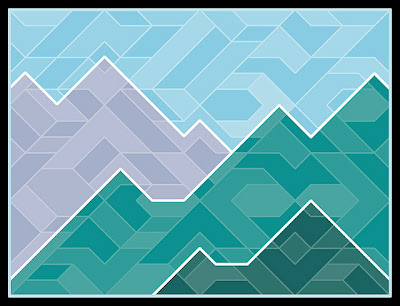 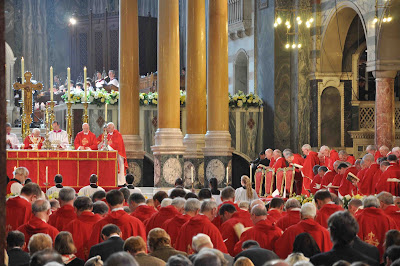 The Holy Father has been modeling for pastors the way the Mass of Pope Paul VI should be celebrated. When you hear Rome speaking of "pastors" you shouldn't be seeing in your mind's eye, Father McDonald or any other "pastor" or "priest" of the Catholic Church. You should be seeing "Bishop" for the word "pastor" when Rome refers to "pastors."

What do we see the Holy Father modeling? I would suggest not only viewing his "modeling" at the Vatican, but on his trips/pilgrimages outside of the Vatican to ordinary parish churches in Rome and his visits abroad. I will be very interested in photos of his African Masses in Benin, West Africa.

But let's look at Papal Liturgies at Saint Peters. The Mass is as dignified as you can have and it is the Ordinary Form of the Mass. There is the use of Lay Lectors both male and female for the Scriptures as well as readers, and multiples of them, for the Universal Prayers (General Intercessions).

The Mass when the Holy Father travels is always facing the people but with the so-called "Benedictine" altar arrangement.

The music is diverse. I watched the Holy Father celebrate Mass about two years ago in a rather small parish at the outskirts of Rome. It looked and sounded like many parish Masses around the world except it was in Italian. But there was a "contemporary music group" to the left of the altar which included guitars. There were altar girls as well as altar boys. Believe me, if the pope did not want altar girls at one of his Masses, his MC would have made sure there were none just as he makes sure that the altar does have the Benedictine arrangement.

For those who are more rigid in how the Mass should be celebrated or who would prefer only the EF Mass, I say that is your right; but you also have to live in the real world of the Church just as the Holy Father does and has done so gracefully over the years.

Fram, thanks for this post. It coalesces a thought concerning the Form of the Mass and therefore a question.

first, it seems as a layman I might view the EF and OF Mass forms as alternatives that, similar to High and Low Mass in the TLM are valid alternatives such that neither depriving or obstructing me in any way.

Now the question that, frankly, I am too lazy to research on my own is this: Is the POpe required to celebrate Mass per the norms established by the bishops in North America? That is the position of our Parish RE and the foundation for their unhappiness with him.

Papal liturgies have some significant differences as do Masses celebrated by a bishop compared to a poor lowly priest like me. But, no the Latin Rite of the Church is what the Pope is to celebrate using all the norms and instructions peculiar to him. He can legislate for the Church and override national norms when he is here. How silly for anyone to think otherwise. Coloring book catechetics?

After the Second Vatican Council, the impression arose that the pope really could do anything in liturgical matters, especially if he were acting on the mandate of an ecumenical council. Eventually, the idea of the givenness of the liturgy, the fact that one cannot do with it what one will, faded from the public consciousness of the West. In fact, the First Vatican Council had in no way defined the pope as an absolute monarch. On the contrary, it presented him as the guarantor of obedience to the revealed Word. The pope's authority is bound to the Tradition of faith, and that also applies to the liturgy. It is not "manufactured" by the authorities. Even the pope can only be a humble servant of its lawful development and abiding integrity and identity. . . . The authority of the pope is not unlimited; it is at the service of Sacred Tradition. . . .
The Spirit of the Liturgy, 2000

To be an Ultramontanist I would have to also accept Topless Native Dancers as Pope John Paul II did. No Thank You.

The authority of the pope is not unlimited; it is at the service of Sacred Tradition. . . .

To get Dissenting Clergy (bishops and priests) to even come up to the low standards of Papal OF Masses would be a great stride forward indeed, and a welcome reform, but would still fall short of his own stated beliefs in our obligation to Sacred Tradition.

Would your cry to be "ultramontanist" apply also to the Church's teaching regarding the accumulation of wealth, the purpose of a worker's wages, and the rights of workers to bargain collectively with their employers?

Do you agree with the Church's condemnation of latifundium?

Don't know to whom the comment is directed, but certainly I accept authoritative teaching both papal and otherwise in the area of social justice, I'll have to look up latifundium!

Billy Reuben Ignotus, Ultramontanism is a loaded political term. It has more to do with Papal Infallibility, as I understand it, than it does with the Church's teachings (Magisterium) on the subjects you mention (which I am certain you interpret in the most socialistic way possible.) How, indeed, do you relate the obsolete concept "latifundium" to our modern era? Are you anti-private property...or just against anyone having too much of it...which I am sure you would define as more than enough to build a small house on.
If the alternative to ultramontanism is your old buddy, subsidiarity, then I certainly prefer super-ultimate ultramontanism.

Ultramontanist is a term Good Father McDonald introduced. And as you note, it is L-O-A-D-E-D.

The opposite of ultramontanism is Gallicanism. "This term is used to designate a certain group of religious opinions for some time peculiar to the Church of France, or Gallican Church, and the theological schools of that country. These opinions, in opposition to the ideas which were called in France "Ultramontane", tended chiefly to a restraint of the pope's authority in the Church in favour of that of the bishops and the temporal ruler. It is important, however, to remark at the outset that the warmest and most accredited partisans of Gallican ideas by no means contested the pope's primacy in the Church, and never claimed for their ideas the force of articles of faith. They aimed only at making it clear that their way of regarding the authority of the pope seemed to them more in conformity with Holy Scripture and tradition. At the same time, their theory did not, as they regarded it, transgress the limits of free opinions, which it is allowable for any theological school to choose for itself provided that the Catholic Creed be duly accepted." -Catholic Encyclopedia

The Church's condemnation of latifundium is in no way an "anti-private property" matter. Do a little reading.

The Church has pretty clear teaching on the topics I mention. Again, do a little reading.

BR, what would those teachings be?

BR, I am still not clear about what you mean. Those teachings have more latitude, and have been more abused, as the Liturgy. In fact, they seem to be the heart and engine for much of laity usurpation per Canon 212.

rcg - a copy of the "Compendium of the Social Doctrine of the Church" Vatican Press, 2005) will lay it all out for you.

Ignotus, I have done a bit of reading...and you did not answer my question...

Pin - If you read with comprehension, you know that what was immoral with latrifundium is immoral nowadays.

See children how the Modernist Weasel will never actually answer a question. Dodge, obfuscate, deflect. Never give a real answer lest it reveal it's true colors.

Hide your sins weasel...from us at least, but God sees them.