WHICH FORM OF THE MASS DO YOU THINK THIS IS?

Press the link below for more sumptuous pictures and guess which form of the Mass it is. Talk about the hermeneutic of continuity! 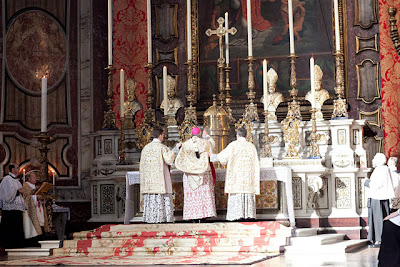 If only this could become the "norm" for the Ordinary Form! We all know that the General Instruction implies it!

Yes, it does, although certainly not every parish could do so as sumptuously at these photos depict, but for it to occur there must be leadership from on high and not just from lowly, idiosyncratic priests--there has to be an abundance of idiosyncratic bishops leading the way and permitting this or some semblance of this!

If it is implied, intended, allowed, or prescribed then it is not "idiosyncratic." Idiosyncratic is the liberties taken by post Vat II innovative Priests who wish to make "idiosyncratic" the norm.

I was just reminded the other day that the former Papal Master of Ceremonies (under John Paul II and at the beginning of Benedict XVI's reign), Piero Marini, was the former personal secretary to Bugnini himself!

We we look back in recent retrospect at the change that has occurred in these few short years since Benedict's reign started, and, especially since he replaced Piero Marini with Guido Marini, it appears that Benedict (with Guido's help) has started a slow, perhaps creeping, campaign to "win hearts and minds" over to a more traditional (more in continuity with the EF, that is) way of offering the OF.

Like a military campaign of preliminary bombardment before the actual invasion begins, Benedict (and cooperatvie bishops who "get it") are "softening things up" before a mandate for change (probably sometime in the somewhat distant future) is "dropped" upon the Church.

He's giving us examples to get us thinking about it before anything is mandated. We just need more examples (EF and OF) to expose more people to this.

I was first exposed to all this in 1993-4 by daily attendance at the (now EF) Latin Mass at the Little Rock, AR Cathedral (Bishop McDonald and the FSSP) while a law student. I then attended a six week summer law program in '94 in Oxford, UK and attended Mass (OF) at the Oratory (St. Aloysius) in Oxford. The Oratorian priests vested just like the ones in this story and offered the OF in Latin as well as in English. They also offered the EF on Saturday evenings.

Needless to say, my experiences of EF and OF in '93-'94 changed my view of what good liturgy should be from then on.

Father, you can't blame her for wanting a front row seat! Who would have wanted to miss a minute of it! Well done!

"If we wish to go to Heaven, we must first go to war." -- Blessed Jose Luis Sanchez del Rio

When my friend, a new convert, and I attended Mass at The London Oratory, she turned to me and said, "This is our faith!" The spirit of the liturgy was alive and well there, sublimely beautiful and transforming.

I have had the same experience for the past five summers at St. Aloysius (The Oxford Oratory), and the blessing of attending both the 8:00 a.m. Tridentine Mass and the OF Latin Mass at 11:00 a.m. From the joining with people of all cultures through the universal language of the Church to the humble joy of receiving at the altar rail, I was impressed profoundly by the solemn, elegant, and noble acts of worship, worthy of the King of Kings.(As an aside: Confessions are offered ten minutes before each Mass.)

Perhaps, both The London Oratory and St. Aloysius attract capacity attendance each Sunday because of the physical beauty of the churches. Yet, I suspect it is something more. Besides two close friends who are octogenarians who attend faithfully, I noted the sea of youthful faces. Many come for the removal of vernacular language barriers through the use of Latin; however, their prayerful attitudes and genuine love for God and His Church betray deeper motives.

I have been accused of loving the EF Mass because of my introverted nature. Au contraire! The flow of my thoughts and the cry of my heart are anything but inner directed during the Latin Mass, but like the most fruitful of contemplation, fly upward and outward on the wings of the efficacious language of prayer.

The EF Mass at St. Joseph reminds us that although a treasured book may collect dust on the shelf, it only needs the right hands to collect it and set it upon the table for others to share. After a time, the pages of divine liturgy will turn again in the right direction.

Frajm says "...not every parish could do so as sumptuously..."

Don't go mistaking sumptuous for holiness or leading to holiness. The Reformation taught us lessons about that.

Ostentatiousness can easily be mistaken in the same way.

Oh yes, let us race to embrace the lessons of the Reformation, that has worked out just great for Holy Mother Chruch.

It's not being ostentacious to Reverence the King of Kings with every piece of finery and ounce of pomp you can muster, it is rendering unto God what is God's. And Father is right when he says not every Parish could do it as well, but by God, they should do it as well as they can, until itb hurts even, just as with Sacrificial Giving.

Templar is correct. It is about intention. We should laud and honor Him with every finery we have, but only as it exalts Him and diminishes us. And, the "lesson" of the Reformation is...take the baby out of the bath before you dump the water.