Expect more of this: 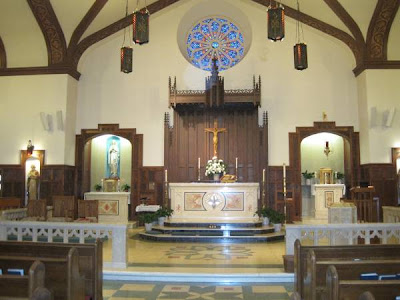 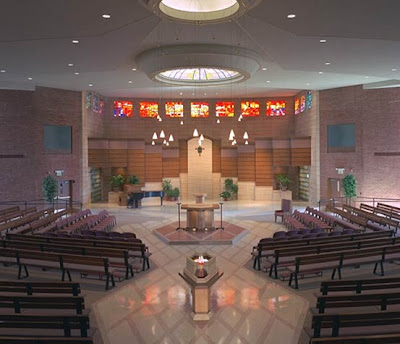 But what you just saw could become this: 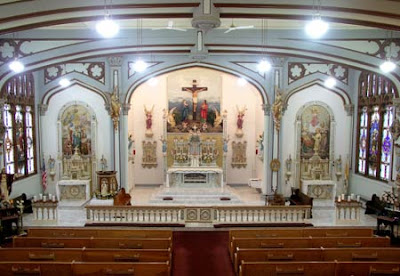 My comments first: This article is very much in line with Pope Benedict's masterplan of Reform within Continuity. As you know, I am clairvoyant, but maybe not. I've already predicted that the Nuptial Mass will have the vows said in place of the Penitential Rite with the Gloria sung or said following which places this reform into the context of the Rite of Sprinkling and the Rite of Receiving a Body during the Requiem Mass. I will stand corrected when this is revealed differently.

But my clairvoyance tells me that the Vatican isn't going to micro-manage Church architecture but put forth general guidelines as the Church has never insisted on any particular form of architecture.

However the Vatican can make legislation as to how the sanctuary is to be constructed, the number of stairs, the manner in which the altar will be decorated (Benedictine arrangement anyone)and how pews should be situated. I would not be suprised by a general rule even for altar railings!

The pre-Vatican instruction for how the Catholic sanctuary was to be designed was very specific, no less than three stairs to the main altar and how the altar was to be vested and decorated. I can see that in my crystal ball happening again.

The new commission will be established shortly, as part of the Congregation for Divine Worship. It will be in charge the design of churches and of music and singing in the liturgy
ANDREA TORNIELLI
Vatican City

A team has been set up, to put a stop to garage style churches, boldly shaped structures that risk denaturing modern places for Catholic worship. Its task is also to promote singing that really helps the celebration of mass. The “Liturgical art and sacred music commission” will be established by the Congregation for Divine Worship over the coming weeks. This will not be just any office, but a true and proper team, whose task will be to collaborate with the commissions in charge of evaluating construction projects for churches of various dioceses. The team will also be responsible for the further study of music and singing that accompany the celebration of mass.

Cardinal Antonio Cañizares Llovera, Prefect of the Congregation for Divine Worship and Benedict XVI, consider this work as “very urgent”. The reality is staring everyone in the eyes: in recent decades, churches have been substituted by buildings that resemble multi purpose halls. Too often, architects, even the more famous ones, do not use the Catholic liturgy as a starting point and thus end up producing avant-garde constructions that look like anything but a church. These buildings composed of cement cubes, glass boxes, crazy shapes and confused spaces, remind people of anything but the mystery and sacredness of a church. Tabernacles are semi hidden, leading faithful on a real treasure hunt and sacred images are almost inexistent. The new commission’s regulations will be written up over the next few days and will give precise instructions to dioceses. It will only be responsible for liturgical art, not for sacred art in general; and this also goes for liturgical music and singing too. The judicial powers of the Congregation for Divine Worship will have the power to act.

As is known, last 27 September, Benedict XVI transferred jurisdiction of two areas, from the Congregation for the Divine Worship to the Rota Romana (the Holy See’s Court of Appeal), under the motu proprio Quaerit simper. The first of these areas is the nullity of priestly ordination, which similarly to marriage, can be annulled due to defect of form, consensus and intention, by both the ordaining bishop and the priest who is ordained. The second area is the special licence for marriages that have been contracted but not consummated. These are practices that occupied a lot of Cañizares’ time as head of the dicastery.

In his motu proprio, the Pope explained: “Under the current circumstances, it seemed convenient for the Congregation for Divine Worship and the discipline of the sacraments to be mainly devoted to giving fresh impetus to the promotion of the Church’s sacred liturgy, according to the renewal required by the Second Vatican Council since the establishment of the Sacrosanctum Concilium.” The dicastery must therefore devote itself to “giving fresh impulse” to the promotion of the liturgy, giving it the focus insisted upon by Benedict XVI, including and above all by showing an example. In this aspect, in contract to the initial plans, the idea of a liturgical “reform of the reform” (an expression used by Ratzinger himself when he was a cardinal), seems to be eclipsed by a large-scale project favouring the ars celebrandi and a loyalty to the dictates and instructions of the new missal. It does so without proposing any modifications to the mass.

It is worth remembering, in fact, that the abuse of the liturgy that has gone on in recent decades, becoming common practice, is committed against the laws established by Paul VI’s liturgical reform. It is not therefore the reform that needs to be amended; rather, further study into the sense of the liturgy and its proper celebration is needed and must be salvaged in some cases. It is for this reason that the Congregation for Divine Worship intends to promote the training of priests, clerics and catechists, starting from the bare basics. By following the example and teaching of Benedict XVI, the Congregation aims to revive a sense of the sacredness and mystery of the liturgy.

Some liturgical texts need to be reviewed, because they are dated, as is the case of the penitence ritual, published in 1974. Indeed, in the years that followed, an apostolic teaching, a motu proprio, a new Code of Canon Law and a new Catechism were published. In this and in some other cases, updates will be needed. The idea Cardinal Cañizares is working on, is that of reaffirming the primacy of grace in human actions, of the need to give space to God’s action in the liturgy as opposed to actions which are left up to human creativity. There will be many opportunities to reflect on these topics. The year 2012 will mark the 50th anniversary of the Second Vatican Council and the year after that will mark the 50th anniversary of the first approved conciliar text, the constitution Sacrosanctum Concilium on the sacred liturgy.
Posted by Fr. Allan J. McDonald at Wednesday, November 23, 2011

It amazes me to see dignified churches made of cider block with tin roofs in poorer countries, while in the USA we build such bizarre ones for millions of dollars. Similarly, it was when US Catholics were poor immigrants that we built the most dignified churches. What's up with that?

Father, I dare hope. My own parish looks rather too much like the second picture. Would that it could be transformed to the appearance of the third!

I would love to see rectangular and cruciform shaped churches with traditional dimensions and detail once again become the norm for the Catholic Church in the U.S. (and, of course with interiors more like the first and third pictures in this post!).

Poor immigrants built beautiful churches because the faith meant something to them. They were willing to sacrifice more. For them, the Catholic Church was more than a place to see a few friends once in a while or go through the motions of Baptism and Marriage. After 40 years of preaching telling us not to be so concerned with "rules" and "sin", guess what? Most Catholics aren't too concerned any more. (and no, I am not accusing YOU of Catholicism Lite, but overall that's been the experience).

My old parish in San Diego, Our Lady of the Rosary, is one of the most beautiful churches I have ever been in, and is hands down the most beautifully adorned Church in the San Diego diocese. Who built it? Poor Italian fishermen in the 1920's. The story isn't anything unique, as there are similar ones all over the country.

I have also observed that there are many YOUNG Catholics today who are just as fervent as the older immigrant groups were and want to give much to their Church. Sadly, in most parishes they are marginalized and treated with suspicion for the crime of wanting a Traditional Latin Mass. Thankfully, lucky Catholics in Macon and a few other pockets around the country don't face that stigma.

All right. I'm done. I just had to get that out.

Frajm, can we make donations earmarked for a future alter-rail? It appears we may be needing it. Maybe if we start saving our pennies now, a future capitol campaign will not be neccessary.

Now that I'm awake, it just hit me--Fr. Shelton's diocese has a terrific example of what a parish can do when building a church, namely the Church of St. John Neumann in Farragut, TN. It is a beautiful romanesque design with a very dignified interior. Another example of a recent churchbuilding gone right is Holy Spirit parish in Atlanta. These churches can serve as a blueprint (and inspiration) for what is possible. We don't have to keep building these embarrassing 70's-style prayer-barns any longer.

Is that first picture of St. James Church in Falls Church Va?

I think it is St. James, I got it off the internet.

The new Cathedral complex planned for Raleigh, NC is very traditional too, Romanesque if I recall.

Robert Kumpel, speaking of "not being so concerned with rules and sins," did you hear Nancy Pelosi's latest Catholic lite comment? She was saying that she just didn't understand this Catholic stance on abortrion. Her comment: "They have this conscience thing." Any Priest that gives this woman communion is defiling the Blessed Sacrament...

I agree completely. A couple of cardinals and a west coast archbishop come to mind, but who am I to judge?

Holy Trinity in Augusta is neo-Romanesque. The planned new cathedral for Raleigh is rendered in the Italianate vernacular.