THE DIFFERENCE BETWEEN "WHAT IF" "IF ONLY" AND "WHY NOT?"

What's wrong with this for the post-Vatican II reformed Mass (Ordinary Form)? 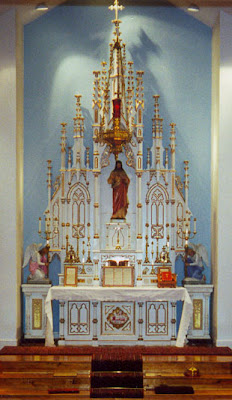 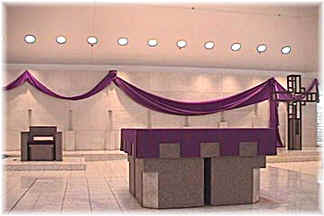 UGH! After renovation! Please note that the renovated sanctuary is on the other side of the altar railing which they kept oddly enough, but now behind the new altar or sanctuary. Were they confused? But at least the old was save and could easily be restored by ripping out the new which I suspect will happen one day if not already! 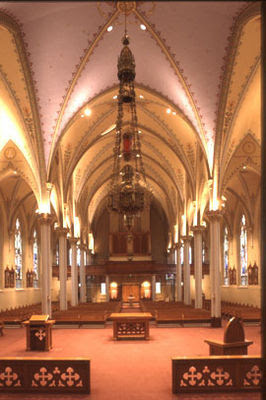 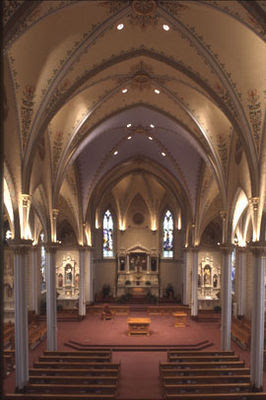 Why not? Before Renovation! Was renovation really needed for the post Vatican II Mass? I say no! What a waste of time, energy and money! 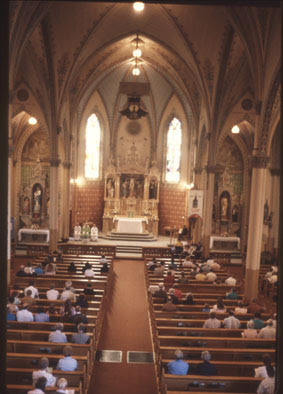 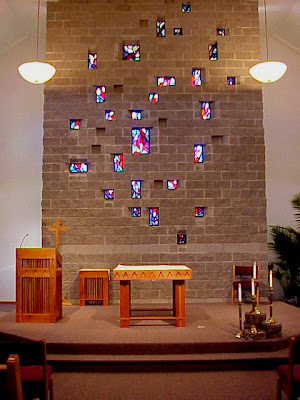 My first paragraph should not be construed as opposing the reform of the Mass because quite frankly I love the reformed Mass when celebrated reverently and as the General norms and rubrics indicate. That doesn't mean that I don't love the extra-ordinary form either. I do and if I had a congregation that appreciated that and wanted it every day, they would get it.

The reason that I love both is because both are the same at least when it comes to its dogma and doctrine although their spirituality and theology may differ a bit.

But back to my main premise: why did we have to deconstruct the Catholic Sanctuary for the reformed Mass? Was it necessary? I say no and that has been a long time in coming as I would have been a "champion" for renovating sanctuaries in the early 1980's. (One day I'll reprint an article I wrote for our diocesan newspaper in 1981 extolling the renovation of Saint Teresa Church in Albany, Georgia by none other than Rambusch! You'll be shocked by what I wrote!) But when I saw what was accomplished by these renovations I realized that nothing really was and that in fact it had a deleterious effect rather than a positive effect upon the Catholicity and spirituality of the congregations which did renovate radically.

You can have a beautifully celebrated Ordinary Form of the Mass in a traditional sanctuary all the while still involving the laity both in interior and exterior participation, reading the scriptures and being Extraordinary Ministers of Holy Communion when needed.

You could still have altar railings and kneel for Holy Communion without damaging the intent of the reform of the Mass that is the Paul VI Missal.

You can still celebrate the Liturgy of the Eucharist ad orientem and still have people understanding why and what is happening at the altar.

So, I say, let's recover the pre-Vatican II altar for the post-Vatican II Mass even if that altar is pulled away from the reredos and free-standing allowing for either Ad Orientem or facing the people but keeping the so-called "Benedictine arrangement" for whatever way is chosen (although I prefer the six candles behind the priest on a reredos if the priest is facing the people, but with a crucifix dead center, but low on the altar facing the priest). "Why not?"
Posted by Fr. Allan J. McDonald at Thursday, November 24, 2011

Father,
I've been thinking about this in light of your last posting and the previous one about the liberal lamenting of the passing of the old (1973) Mass translation.
There is (in my opinion) an evident and strange paradox here.

Liberals (or "progressives" or whatever you want to call them) usually hold themselves out as more knowledgeable or enlightened about what is important than the general population.

Liberals say they want simple, straighforward, pedestrian prose for the language of the liturgy because anything else (to them) is not intelligible to average people (keep in mind that they don't usually see themselves as being in that lower intellectual category).

You would think that they would also want church architecture and adornment to be on a level that would most effectively communicate the Truths of the Faith to average people.

Now, I'll admit, when it comes to art and architecture, I simply don't understand the modern stuff. I see it as plain, cold, stark and uninspiring. I see it as a symptom of the tragic history of "modern" times(meaning at least all of the 20th century and probably beginning with the French Revolution). For average people (those who are not educated, or semi-educated in art) there was a delay as to their being affected by and exposed to much modern art and architecture until at least after World War II and intensifying in the 1960's (my least favorite period of history!).
As to architecture, I see the aftermath of World War II and the 1950's as a time of transition from the "good" older architecture (both in secular buildings and in churches) to the plain, ugly hard to understand stuff we often see today.

As to art itself, give me a realistic Renaissance painting of the Crucifixion or of a saint or, in a secular setting, work by Norman Rockwell, J.C. Leyendecker, or James Montgomery Flagg to the "modern" stuff anyday! I want art that shows things in a way that it is obvious as to what is being portrayed--I don't want to have to figure it out or have to get an art degree to understand it!

Here's the paradox: Because liberals are so concerned about the language of prayer being understood by average people like me you would think they would also want church art and architecture to being easily understood as well! The radically over simplified style that they seem to prefer doesn't show enough--it is so simple and plain that it doesn't illustrate and reinforce and transmit Truths of the Faith the way the older stuff did. It doesn't effectively perform its full function (which is more than simply housing a congregation for Mass). As I've said before, when it comes to transmitting and reinforcing our Faith, externals do matter!

I agree with EVERYTHING you're saying Father. But I have one question for you, have you made the changes to using the traditional arrangement of the sanctuary, ad orientem, communion rails, etc. full time yet?

The difference between "what if" and "if only" and "why not" v. "done" are the priests and bishops. If it is kept in the realm of the theoretical, it will only stay a theory. This isn't a theory, it should be a reality.

I challenge any priest, bishop or edcuated layman to show where the changes implemented after Vatican Council II were implemented.

The faithful will adapt. YOU must lead.

I hope that you're practicing what you preach. As a layman, I want what you advocate. I speak about it on my blog often. (If you're curious, click on my name and check it out) The priests are afraid of their bishops and the bishops are afraid of the liberals. That is why none of this is done, save a very, very few who have courage enough to stand up and say, enough is enough. Bishop Slattery comes to mind. The late Mons. Richard Schuler (my mentor) is another.

Liturgically, the Church has been hijacked by the Protestant mentality. Bottom line. We take the Protestant out of the Mass and the move to what you're advocating is simple.

Joseph, I think we are trying too hard to avoid speaking the obvious: the progressives wanted to at least overthrow the Church, if not God Himself. The Liturgy revision was either a ruse or an excuse to make changes that are unrelated. Why hide the Tabernacle if you want people to understand God?


What if a priest moved from Mexico to the USA and, not speaking a word of English, earned our language and decided to translate the Mass from Spanish to English? Talk about conflicted! The progressives would be hearing almost exactly what they are hearing now! How would they ever get Pan de Vida back in the hymnal?

Father is exactly 'rite'. The OF could be just as reverent and beautiful as the TLM or EF Masses. But all the other actions were to strip the God-stuff from the mass to eventually leave only the ethics that can be easily accepted by anyone and have the ethnocrats running the exercise.

At Saint Joseph we are using the Benedictine altar arrangement with the crucifix dead center on the altar for the priest to see and orient himself. However, we're still following the norms of the Church in the USA for Holy Communion--it is there that we should legislate and have the endorsement of our bishops or else we become like the anarchists in the Church doing these things without moving the law first. But with that said our EF Mass has ad orientem and kneeling for Holy Communion at portable kneelers.

It is not merely that it was a waste of time and money; it was also a desecration of beautiful altars originally erected to the glory of God, so they might be replaced by--to borrow a word from Pope Benedict--banal and stark architecture.

These newer structures evidence no thought of reverence, nor of worship. They seem designed to lower the tone of the Mass to what it too often resembles in my own parish: a communal meal, or picnic.

Today, Thanksgiving, with 5(!) priests concelebrating, and about 600 of the faithful in attendance, we had--wait for it--8 (not so) Extraordinary Ministers. It is to weep.

Truly, the video you posted, with Larry and Sarah, where Larry asserts the "right" of the people to serve communion, is at work here.

As I have not so far located a Novus Ordo parish here which even approaches any sort of reverent and traditional worship, I will sooner or later bite the bullet, and make the 40 mile trip to the only parish in the Archdiocese of Atlanta at which the Extraordinary Form is offered.

Meyer, I had no idea things were that bad in Atlanta.

Meyer, that one parish where the EF is offered has a humble, small, located in a not-so-great part of Mableton, absolutely-beautiful-inside little church building.
I imagine you've been there before.
It's a little oasis!
~SqueekerLamb

I have not been there, but have seen it on their website. It's a long drive, but becomes ever more appealing.

I have been to other parishes, and they are not as bad, depending on which aspects you find most disturbing. In my own parish, apart from the unending scandal of 8-10 EMHCs at each Mass, there is the complete absence of the bells during the Mass, and the absence of incense from all but a very, very few Masses each year.

On the good side, the acoustics are fine, so I can hear every ad lib with clarity. On the down side, the Tabernacle is in the chapel.

At other parishes I have attended in the area, the acoustics range from bad to horrible, making the (often foreign-born) priests unintelligible. On the other hand, the other parishes have the Kyrie in Greek (we do not), the bells during the Consecration, and some degree of chant.

What disturbs me most in my own parish is that there is noisy chatter before the Mass, most of which originates in the choir, who are seated to the left of the altar as I face it, not in a loft.

I've been in this parish since early 2006, and in that time, only two significant improvements have been made: first, that a private donation provided the crucifix which is now above the altar (and was the occasion of much wailing and gnashing of teeth by the lay staff), and second, that the altar servers are now in cassocks (another donation, this time from the KoC.) I note that these changes would almost certainly not have been possible, had our pastor not received private funds for the purposes intended.