THE MENTALLY ILL RADICALIZED BY THOSE WHO ARE NOT MENTALLY ILL, THE SANE PROMOTING THE CULTURE OF DEATH 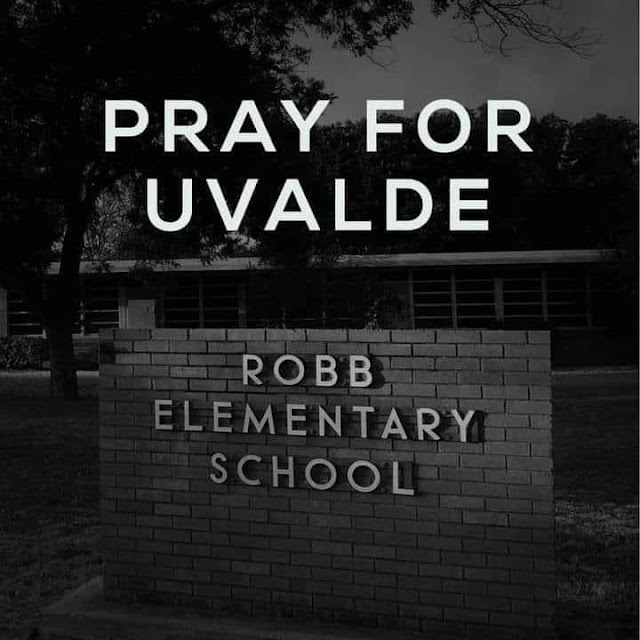 O God, grant grace to those who suffer greatly from the demonic actions of others. We lift up in prayer those who grieve the loss of their children and we entrust them and your dear children senselessly killed to your loving embrace and your promise of eternal life in heaven. Calm our anger with your grace and motivate us to bring the culture of life to those blind to the culture of death they endorse and promote. Through Christ our Lord.

The culture of death in this country is at the root of these horrible mass murders where mentally ill people take to its logical conclusion the right to choose to kill  the innocent.

This is what Nancy Pelosi said yesterday before this mass shooting in Texas:

“I come from a largely pro-life Italian-American Catholic family, so I respect people’s views about that. But I don’t respect foisting it onto others.”

Wrap your head around that demonic, ignorant statement and ideology! She doesn’t want to foist onto others a pro-life mentality or laws protecting unborn children from murderous abortionists hired to rid a woman of a bothersome child who God placed in her womb for safe harbor until the day of birth.
And what role does the 24 hour news media and social media play in their non-stop coverage of these tragedies and the too many hours of “fame” given to perpetrators of these demonic crimes?
If we are going to talk about laws limiting the ability of teenagers and the mentally ill to purchase assault weapons, which needs to take place, we also need to limit the non-stop 24 hour news coverage of these tragedies which turn tragedies into reality programs for ratings and money!
Make no mistake, this mentally unstable teenager who killed so many children aborted human life. But he may well have been insane at that moment. What about abortionists who do their murdering of babies and far more murders than this teenage derelict, who do their dastardly deeds for pay and in their right mind?
God help us. God help our nation. Lord have mercy.
Posted by Fr. Allan J. McDonald at Wednesday, May 25, 2022

Nancy Pelosi is not the brightest bulb. The basis for all law is morality, that's how laws come to be in most instances. Pelosi is perfecting willing to foist an all powerful federal government on us without our consent. She should really stop digging.

One thing we do know is that Pelosi believes she is above the law, the law of the Catholic Church. Instead of talking to her Archbishop she goes on TV and rants about the death penalty. I fear that she will push Archbishop Cordileone to exercise the ultimate penalty and then what will Archbishop Gregory do?

Father McDonald said..."This is what Nancy Pelosi said yesterday before this mass shooting in Texas: “I come from a largely pro-life Italian-American Catholic family, so I respect people’s views about that. But I don’t respect foisting it onto others/.”

Father McDonald added: "Wrap your head around that demonic, ignorant statement and ideology!"

Archbishop Salvatore Cordileone, to Nancy Pelosi's spiritual benefit, demonstrated that her pro-abortion stance is unsupportable, according to Holy Mother Church.

As a Catholic, Nancy Pelosi does not have anywhere to turn to justify her defense and promotion of abortion.

Nancy Pelosi must side with Archbishop Cordileone, through whom Jesus Christ has spoken in regard to abortion, or Satan.

Pope Francis praised a pro-life event in Rome and offered comments defending the dignity of life on Sunday.

According to the website for the national Scegliamo la vita (Let’s Choose Life) event, the May 21 gathering intended to affirm the dignity of human life from conception to natural death.

The pope greeted participants in the event after praying the Regina Caeli in St. Peter’s Square in Rome.

“I thank you for your dedication in promoting life and defending conscientious objection, which there are often attempts to limit,” he said.

“Let us remember that life is a gift from God!” he said. “It is always sacred and inviolable, and we cannot silence the voice of conscience.”

It is import, vital, that the person make the choice to follow Christ of his own free will as much as he is able to do so. There are a few laws that are non negotiable, such as protecting innocent life, although the aggressor may still be ignorant of his sin. The sick SOB that killed the little kids in school was apparently bullied and known to act aggressively and oddly. He is already being cast as a link in a chain of victims. Society coached him into the behavior modes of the modern victim, absolved of responsibility for his actions. I despise the constant stream of political hogwash that streams in our media, including this website, but it is our political leaders who have come to cast other Americans as evil and deserving of verbal violence so this constant tragic stream of inevitable physical violence results only in the opportunity to attack others for political gain. More and worse is coming very soon because the struggle for worldly power is an endless cycle.

At least, which this horror, the political spin from the president and democrats isn't white supremacy and racism. It is evident that this teenager is compromised and emotionally stunted, a psychopath and sociopath. Mental illness is the problem in most if not all of these mass shootings and seems to favor men who carry out these horrible acts. A good study on that would be important.

Look this was a horrible crime, terrible. But so was the murder of innocents in Waukesha Wisconsin last year by a BLM activist driving a vehicle. Father McDonald is right - these are mentally ill folks
who will kill by any means available: guns, knives, vehicles, etc. These crimes are almost impossible to stop because under our laws it is almost impossible to take preemptive action. I was very surprised this school did not have security in place which might have made a difference. Prayers for all.

" A good study on that would be important. "

There are also dozens of studies on fake Catholics who vote Democratic. Not good

Among other things, the policies that have an impact on mass shootings are 1. Universal background checks, and 2) tight limits on magazine capacity for semi- automatic rifles. Now, why a person on the street needs a semi-automatic rifle is another matter.

The background checks should apply to ALL firearm sales and/transfers. You want to give your 18 year old daughter a handgun for her birthday, she gets checked, etc.

Penalties for not securing firearms are another area that needs attention. This from the 21 Feb Statesboro Herald, "Gun owners who leave cars unlocked major source for Statesboro gun thieves".

Beneath it all is the same radical individualism the serves as the basis for most of our societal ills from highway boy-racers to international hacker extortionists.

I am all in favor of laws regulating who can buy guns, to include background checks, age limits, etc. But as we saw with Prohibition, those who want alcohol got alcohol, no matter how outlawed it was. The same with guns. These can be purchased in normal ways or on the black market if outlawed.

Apart from individualism, we are talking about sociopathic and psychopathic personalities. individualism in and of itself is not a bad thing, especially viewed through the ecumenical eyes of Protestantism.

But if you democrats want to outlaw guns, I would endorse that as long as you advocate for outlawing abortion. Of course even with abortion there are black market opportunities to get one from a murderer willing to perform it.

Sorry, Allan, "You democrats (sic)" doesn't apply to me. TJM's lunacy seems to be getting to you.

"Outlaw guns" is one of those worthless, throw-away phrases used for emotional impact, and an example of radical individualism, that get thrown around.

Regulating guns and gun ownership is supported by a considerable majority. What is lacking is the willingness of legislators to risk their positions in order to enact it.

In your passion to denigrate "lawmakers" as it concerns regulating guns, you say not a word about the single worst enemy of children and the millions upon millions who have been massacred through legal abortion, legalized murder of innocents. And that's a scandal and the Democrats will have to answer for it especially Catholic democrats who place their party over Jesus.

I think a priest who votes Democratic is displaying lunacy kind of like a Jewish person voting for Hitler. By the way, Biden’s ATF pick opposes having teachers with police or military backgrounds being armed at schools!

Chicago has some of the nation’s strictest gun control laws, yet Democrats keep shooting Democrats there on a daily basis!

I also didn't mention the genocide carried out in the Congo by the Belgians, the assassination of JFK, or the eruption of Krakatoa. None of them are germane.

This Democrat sounds "nice.: Good company you are keeping, Padre:

Venture capitalist and woke Democrat Nick Hanauer is a big part of why we don’t see many quality ideas to address tragic events. In the aftermath of the Uvalde mass shooting, he decided to wish “terminal cancer” on who he perceives as his political opponents.

“Let me pray too. Dear God, please reach down in all your mightiness and give all of these Republican politicians terminal cancer. Let them die excruciatingly painful deaths and then chuck them into hell for all eternity. Amen,” Haneur tweeted.

Incredible FRMJK, from a Catholic point of view, these are related theologically to original and actual sin. But in terms of what is happening now in the USA as it concerns the slaughter of innocent people, children and adults, abortion is the preeminent source of murder for children.Yet, no coverage or outrage about the weapons used to murder unborn children and the sane people who do it.

I wish we had a Pius XI today because he would pen another encylical condemning the modern Democratic Party as he did the Nazis, Fascists, and Communists. Then we could purge the clergy

I don't think anyone would be opposed to background checks as such, however, when people who are showing signs of *insert problem here* and nothing is done about it, how in the world could one expect the government, which can't even manage to balance a budget, and somehow figures that one can just throw 40 billion to Ukraine magically, somehow be expected to keep up with background checks? Let alone the few times that we've had mass shooters, and they did come up with background issues, nothing was done.

As I always say, no amount of legislation will change what requires a change of heart.

Without objective measures defining what mental illness is, don't underestimate the ability of the powers at be to manipulate that so that those that oppose *insert ideology here* will be defined to be mentally ill...and thus begins the purge...with the backing of the government.

Need I remind folks that Chicago has some of the toughest gun control laws in the US and it's still Democrats shooting Democrats there on a 24/7 basis. The media does not focus on gun violence there for pretty obvious reasons. Contra the agenda! Some perpetrators are more equal than other perpetrators.