DOES SEAN MICHAEL WINTERS OF THE NATIONAL CATHOLIC REPORTER READ MY BLOG???? 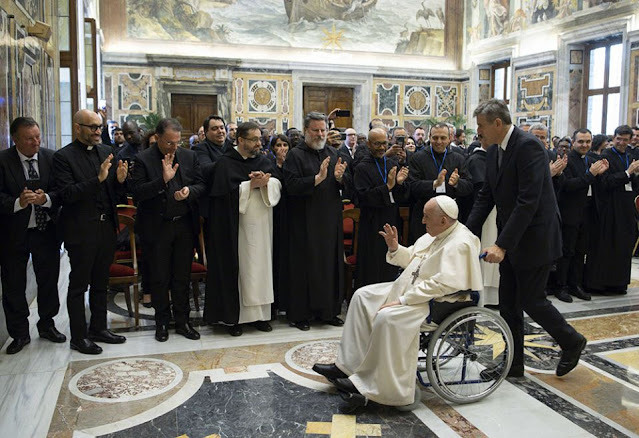 It sure seems to me that he is responding or answering some questions and reactions I posted on Pope Francis incoherent talk on the liturgy where he mocks and denigrates faithful Catholics who celebrate the Ancient Latin Mass with energy and joy. I tried to point out some of the good things the Holy Father said that he then voided by his nasty, negative talk, which was completely unnecessary in his elocution.

Press the title for Sean Michael Winter’s commentary on the Holy Father’s negative talk about faithful Catholics who joyfully celebrate the older liturgical books while saying not a word about how the Modern Roman Missal is celebrated in such a horrible way in most Catholic parishes throughout the world. It really is a Twilight Zone moment to say the least!

by Michael Sean Winters
Posted by Fr. Allan J. McDonald at Wednesday, May 11, 2022

Really Father, all this talk about denying Vatican II is utter nonsense.


I'm not denying it.

My working theory is that the Pope sees the world through his experiences without rising above them. I acknowledge what he experienced growing up in Argentina and I see flashes of conciliatory actions to what is called Tradition but they seem superficial and sometimes calculated. I have been blessed to worship God in Masses at various places in the world where expressions of local culture are offered along with the core of the Liturgy. So I also acknowledge the desire to enlarge Christ’s Church through engagement with local cultures. Unfortunately, it seems that the magisterium allowed itself to be co-opted by local cultures rather than converting them. I don’t need to reject Vatican II if it fails on its own.

So is it that it’s okay for us to be nasty to our fellow countrymen who are in error in politics, yet Borgoglio is criticized for being “nasty”?

The deal is that all of you (and me) are far too frequently “nasty.” I’ll be criticized again for my suggestion: Be civil, even nice, as we would like to convince people of the Truth and telling them constantly just how awful they are is not convincing.

It’s one thing to tell a man to go to Hell and quite another to make him go!

“Fat Frank, shut up!” Or, “Holy Father, we your loyal flock reiterate our faithfulness and offer you our prayers, now and always.”

Which one is more likely (in relative terms) to make a difference?