AN ENCOURAGING BOMBSHELL FROM SAN FRANCISCO, WILL WASHINGTON EXHIBIT THE SAME GIFT OF COURAGE AND RIGHT JUDGMENT BESTOWED AT CONFIRMATION? 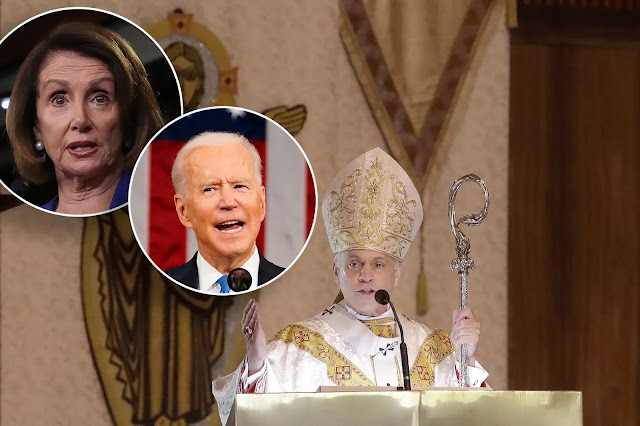 The Heart of the Lion!!! Deo Gratias!

Archbishop Cordileone noted that Vatican II declared that "from the first moment of conception life must be guarded with the greatest care while abortion and infanticide are unspeakable crimes."

Archbishop Cordileone noted also that His Holiness, Pope Francis, has "been quite clear and emphatic in teaching on the dignity of human life in the womb."

In powerful, unassailable fashion, Archbishop Cordileone shattered any attempts by folks who would pretend that "modern" Catholics may base their support of abortion/the Culture of Death upon "liberal" Vatican II, as well as "liberal" Pope Francis.

Archbishop Cordileone has made it clear that via Vatican II, as well as Pope Francis, Nancy Pelosi, should she wish to flee Satan/The Culture of Death, must reject the unspeakable crime of abortion.

In regard to abortion:

-- God, via Vatican II, has spoken to Nancy Pelosi.

-- God, via Pope Francis, has spoken to Nancy Pelosi.

-- God, via Archbishop Cordileone, has spoken to Nancy Pelosi.

May Nancy Pelosi heed God's call to side with the Culture of Life...to side with Holy Mother Church's rejection of abortion.

Pope Francis will likely punish Archbishop Cordileone. After all he has done nothing to Joe Biden

This is alarming and, coupled with the leaked draft of the Supreme Court decision, will force The Church into the spotlight of American politics. There are far less consequential politicians that imitate Representative Pelosi. What will their bishops do? I suspect the laity will figure heavily in this, as well.

It is possible, even likely that nothing significant will happen and Rep. Pelosi will simply omit future professions of her Catholic faith. But it is possible that The Church will come under a very strong and personalized attack. We may live in interesting times.

Regarding your question about the Archbishop of Washington, why bother even asking.

We all know darned well he isn't going to do a darned thing, except maybe condemn Cordileone.

I could say more, much more, but it would be sinning against charity. I'll let the resident modernist priest who always has to have the last word (symptom 1) defend the Archbishop of Washington, if he is so inclined.

The Archbishop of Washington is entirely able to defend himself. He needs no help from me.

And if you've thought enough about the "more, much more" you could say to know it would be a sin against charity, then, well, you've already fallen for The Tempter's wiles.

What I am inclined to is orthodox Catholic theology and doctrine, not the "modernist" version that seems to be lurking around your every corner.

To be fair, none of us really know what Pelosi's personal disposition is, but based on her public statements and behaviors, one might conclude that she either doesn't believe in the authority of the Church or doesn't care about her soul or is perfectly possessed.

However, there can be no disputing that she DOES care a great deal about her public image and part of that contrived persona is passing herself off as a "good Catholic".

In a way, who can blame her? The average Catholic has been so beset with ambiguity and inconsistency since Vatican II that it's hard to tell up from down unless one dedicates a good bit of time to studying what the Church actually teaches and what has really happened since 1963.

B’Rus, so true. But has been true for a long time. So her mischief is intentional harm.

The importance of Vatican II:

-- From 1962 A.D. to date, now-Pope Emeritus Benedict XVI has promoted Vatican II to the hilt.

-- Pope Emeritus Benedict XVI has insisted that Vatican II is in line with Holy Tradition.

"The Second Vatican Council, in its Decree on the Church in the Modem World, Gaudium et spes, reiterated the Church's ancient and consistent teaching that “from the first moment of conception life must be guarded with the greatest care while abortion and infanticide are unspeakable crimes” (n. 51)."

Archbishop Cordileone made in clear that Vatican II is in line with the "ancient and consistent" Church teaching.

-- Archbishop Cordileone made iT clear that Vatican II, in orthodox, and powerful fashion, speaks to us today.

-- Vatican II has destroyed any attempt by Nancy Pelosi to justify her attachment to abortion.

As Pope Emeritus Benedict XVI has insisted, and Archbishop Cordileone has just demonstrated, Vatican II is alive and of great blessing to Holy Mother Church.

There are certain Catholics who have advanced the following preposterous claim:

-- Pope Francis has not been a clear, and powerful force, in opposition to the Culture of Death's war against unborn babies.

Archbishop Salvatore J. Cordileone, via his recent letter to Nancy Pelosi, has rejected, as well demonstrated, the preposterous nature of the above claim.

Archbishop Cordileone declared that Pope Francis has been "quite clear and emphatic in teaching on the dignity of human life in the womb."

"His Holiness, Pope Francis, in keeping with his predecessors, has likewise been quite clear and emphatic in teaching on the dignity of human life in the womb."

Please give us an example or two where PF has taken decisive action against a miscreant Catholic politician. No running away or hiding from my question.

I share RCG’s concern about the “alarming” nature of this development.

Related, what is the position regarding judges? Specifically, regarding Justices on the U.S. Supreme Court who publicly profess their Catholicism, or whose Catholicism is very well known? I cannot find a definitive answer, although the following USCCB source quotes passages that would seem to sweep broadly enough to include judges:

By the way, if you click on the Daily Mail article in the main post, you will see that it has been updated to include a significant attack on the Archbishop for his alleged misdeeds in the past.

Don't waste your time debating Mr. Sanctimony. It will be about as productive as trying to get that other person whose name elicits groans to admit he is wrong about voting for abortion.

Of course you don't debate with "Dump and Run." He never backs up his cut and paste statements
with actual facts. LOL - "whose name elicits groans!" That is a classic.

Dailymail - smearing the Archbishop with facts irrelevant to the issue at hand is how the left rolls. Too bad the Archbishop did not behave like some of our prelates of old and had a limo and chauffer take him places. Pelosi appears not only to be a bad Catholic with her love affair with Planned Parenthood but she is also shady in her business dealings - using insider information on legislation to enrich herself. Her personal account returns often exceed many reputable benchmark funds. I found it quite offensive that during the pandemic when millions were being tossed out of worked that she paraded in her luxury kitchen with her $24,000 refigrator and waxing eloquent about her $13 a pint ice cream.

This is an interesting poll. It shows how Democrats think. To them abortion is the most important issue. That should give Catholic bishops and priests cause for "discernment."

The one group that didn't agree? Democrats. For them, abortion (18%) is the most important issue facing the country right now. Inflation is in second place at just 14%, just barely ahead of election laws (13%) and climate change (10%).

By the way, the Archbishop in DC wimped out. He's with Pelosi. I am not certain what canonically constitutes a schism, but this is not a good look for the Church. Her home Archbishop tries to correct an egregious situation and the Archbishop where she works does not support his brother bishop. I shudder if this goes to Rome.

I would expect no less from a McCarrick protege. The Cardinal through his actions shows he is a political hack, not a Vir Ecclesiae.

Wilton Gregory is a McCarrick holdover. He is so weak and totally aligned with the Germans. His lack of spine in the Cordileone situation is absolutely not surprising.

Bishop Burbridge of Arlington VA is applying the ban to Pelosi in his Diocese. It is a good statement and his reasoning is sound. I guess Pelosi has to go back on TV to attack Bishop Burbridge now and get Whoopie to go after him!