LORD HAVE MERCY! BUT PLEASE BE NICE! I AM SURE THIS IS A SHOT IN THE HEART TO ARCHBISHOP CORDILIONE AND TO ARCHBISHOP GOMEZ OF LOS ANGELES 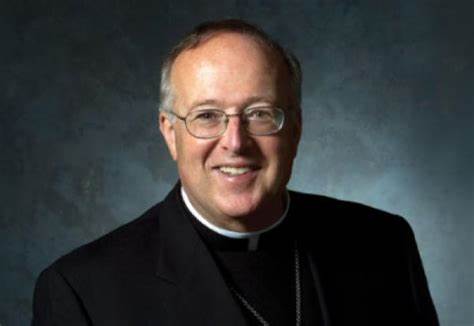 VATICAN CITY — Pope Francis said on Sunday that he will create 21 new cardinals, including San Diego Bishop Robert Walter McElroy, at a consistory on Aug. 27.

The 85-year-old Pope made the announcement from a window overlooking St. Peter’s Square after reciting the Regina Coeli prayer on May 29.

Since his election in 2013, Pope Francis has created 101 cardinals from 58 countries at seven consistories.

McElroy is a terrible choice - heterodox

McElroy? Seriously? That's like appointing...oh, the heck with comparisons, THAT is just plain embarrassing.

Then again, we've been in embarrassing territory for some time now

I'm sure I'm not the only one who's noticed that an AUTHENTIC, CATHOLIC AND FAITHFUL bishop, whose seat is more worthy of a Cardinal's appointment--Salvatore Cordileone--gets overlooked yet again.

Speaks volumes and what it's speaking isn't good.

McElroy? Seriously? That's like appointing...oh, the heck with comparisons, THAT is just plain embarrassing.

Then again, we've been in embarrassing territory for some time now

I'm sure I'm not the only one who's noticed that an AUTHENTIC, CATHOLIC AND FAITHFUL bishop, whose seat is more worthy of a Cardinal's appointment--Salvatore Cordileone--gets overlooked yet again.

Speaks volumes and what it's speaking isn't good.

-- Secretary of the Catholic Theological Society of America.

-- Doctorate in Sacred Theology from the Pontifical University of Saint Thomas Aquinas, Angelicum in Rome in 1931 A.D.

"Since the death of [Pope] St. Pius X the Church has been directed by weak and liberal popes, who have flooded the hierarchy with unworthy and stupid men."

I guess that Pope Francis is in good company with our "weak and liberal" Popes, who, from 1914 A.D., to 1962 A.D. — Benedict XV, to Saint John XIII — had "flooded the hierarchy with unworthy and stupid men."

Father, you might be interested in the new cardinal from Marseille, France. He celebrated a pontifical mass in January 2022 (after Roche had forbidden the old pontifical). Here are some photos from that mass:

Also here are photos of Cardinal-designate Aveline celebrating confirmations and a pontifical Mass in 2019:

Very interesting. This pope keeps us wondering. Thanks for the link.

Among the new cardinals, 16 are below 80 having the right to vote in a
conclave. All of them are strenuous Francis followers.

After this consistory, Francis will have named 83 of the 132 voting Cardinals.
87 votes are enough to pick the next pope.

Francis prefers to choose weak and compromised figures like Cantoni and McElroy
who will not put him in the shadow. McElroy, for instance, a McCarrick
favourite knew about McCarrick’s abuses. If the oligarchs' media were honest
about "abuses," they could easily stop McElroy from becoming a Cardinal.

Of the seven Cardinal electors from the USA - the biggest number in history -
five are homosexualists: Cupich, Tobin, Farrell, Gregory and now McElroy.

CatholicSat writes on Twitter.com that a good number of new Cardinals openly
favour state-recognised homosex concubinages. For Deacon Nick Donnelly the
major thrust of the Bergoglian pontificate is "getting out the welcome mat for
ctive sodomites.”

Neo-Cardinal Leonardo Steiner of Manaus, Brazil, allowed a 2021 homosex
presentation in a parish while suppressing evangelisation of indigenous
villages.

After seven (!) years, Dialogue-Francis will meet with the College of Cardinals
after the August consistory, allegedly to discuss the Apostolic Constitution
Praedicate evangelium.

“As the visible head of the Church, the Pope has a global vision of Church life and can perceive things that we cannot from our more local perspective.”

OF COURSE Archbishop Cordileone, a fellow California bishop is going to issue a positive statement. Unless you are a complete political ideologue (like a certain Cardinal in D.C.) it is expected that one pays congratulatory lip service to their fellow bishops.

If McElroy had to debate Cordileone on just about any issue regarding the faith, you'd have to peel McElroy off the floor when it was over with. Thanks be to God our prelates don't have to operate like our politicians. Unfortunately, too many choose to do so anyway.

I call MT posts “barf alerts.” I suspect even PF would be embarrassed by his posts!

Jerome Merwick said..."OF COURSE Archbishop Cordileone, a fellow California bishop is going to issue a positive statement. Unless you are a complete political ideologue (like a certain Cardinal in D.C.) it is expected that one pays congratulatory lip service to their fellow bishops."

If Bishop Robert W. McElroy is an horrific bishop...an horrific choice to serve as a Cardinal...

...and if Archbishop Cordileone has paid mere lip-service to Bishop McElroy's elevation to the rank of Cardinal...

...then Archbishop Cordileone is as much of the supposed problem within the hierarchy as is Bishop McElroy.

Archbishop Cordileone positive statement in favor of Bishop McElroy is either honest and sincere, or a lie.

If Archbishop Cordileone's positive statement in favor of Bishop McElroy is not sincere, then the Archbishop has covered-up for a supposed horrific, unworthy, bishop/Cardinal-designate.

Part of the reason so many of us sigh when we read your unctuous little screeds is that they radiate naivete. In an ideal world, you would be right. We do not live in such a world.

Priests all over America have problems with their bishops. For some, it is minor. For others, it is huge. Regardless, any priest who cares about his ministry show lip-service support to their bishops. To do otherwise, risks removal.

Likewise, most members of the hierarchy operate on a similar level. Do you honestly think for one moment that Cardinal Burke sees much that is praiseworthy in Pope Francis? Well, actually someone like YOU might actually buy such a thought--which is why used car salesmen stay in business. However, I would contend that Burke (and several of his peers) are bitterly disappointed with this pope, but they put up a good public front. To do otherwise would be ecclesial suicide.

Mark, you are looking at the reality of a corrupted hierarchy and cutthroat Machiavellian climate with tfalsam pacem respuenteshe eyes of a little child.

Please don't take this as a hostile remark, Take it as advice:

When you look at many of the US cardinals today you see a group of mediocrities, men who would not have been considered under any other pontificate. Meanwhile first rate Churchmen like Cordileone and Sample are overlooked. The men appointed by Pope Francis are probably suitable for managing the decline but useless for growing the Church in the US.

This links readers to an article about McElroy by Rod Dreher that is both objective and hardly flattering. One of the most important quotes:

"Nobody is saying that either McElroy or Fernando Vergez Alzaga, the LC cardinal-designate, are or ever have been sex abusers. But they are both tainted by the scandal, to an extent that it is hard to comprehend why the Pope would elevate them, except that protecting the good ol’ boys network is the most important thing. I’m beginning to think that the Uvalde cops are a metaphor for a number of our elites, across institutions, including (but by no means limited to) the Catholic Church: standing around with the authority to respond effectively to crisis, but too afraid and bound by bureaucratic procedure to do a damn thing."

There is do disputing that McElroy is a McCarrick protege. There is no disupting what it took to get "Uncle Ted" to take an interest in one's career and lend a helping hand towards promotion? Guilt by association? You bet.

Jerome Merwick, you are an insult artist. Your nasty manner has made it clear that you are not interested in rational, respectful dialogue.


-- Cardinal Pell, in regard to his arrest, trial, and imprisonment:

“Pope Francis supported me strongly through all these troubles.”

And your cut and paste approach hardly constitutes "dialogue." You never respond to a direct question from anyone.

Given the holier-than-all-of-the-rest-of-you adventures in papolatry that most of us have nauseatingly tolerated from certain people who post here, I'd say I've shown remarkable restraint.

The Church is the Mystical Body of Christ. It is the instrument of God's mercy on earth. It is Militant, Suffering and Triumphant. It is divinely instituted.

It is also run by men. Many of these men were, are and will continue to be fallible, vain, ignorant, limited, vengeful, selfish, unselfish, selfless, holy, single-minded, double-minded, brilliant, egotistical, humble, charitable, focused, careerist and more. Just about any virtue or vice you can name is present in the Church among its priests and prelates at any given time. Sadly, it sure seems like the bad guys outnumber the good guys in our present situation.

I get it: To have to admit to oneself that a priest, bishop or even a pope might not be a paragon of holiness or has made serious mistakes, or worse, is even evil--to admit any of those things forces a confrontation with reality that is jarring. It can destroy one's paradigm of what they WANT to believe and leave us in the uncomfortable position of facing some ugly truths.

Any priest or bishop with an IQ over 60 knows that you put up a good front with your fellow clergy. Not because they are liars, but because tearing them down publicly usually (although not always) does no harm than good.

If anyone here wants to see the work of an insult artist, I suggest clicking here

for a sampling of the "kind, warm fuzzy" insults Pope Bergoglio has leveled at other Catholics--many of whom he has never met or knows little or nothing about. Or look at just about ANY remark made by Franciscardinal Wilton Gregory about Donald Trump--a clear example of a "holy churchman" who not only insinuates himself into secular politics, but seems more interested in such affairs than effectively leading in the. Church.

So I say to those who can't seem to grasp that our Divine Church has to live in this muck of human reality: Get real. Grow up.

OK, I figured out my analogy:

Suppose you had a daughter. She is about 25 years old. When she was 16, she foolishly dated a very rebellious boy. He took advantage of her. He ruined her reputation. He hung around with hoodlums and had a juvenile criminal record. Eventually, she grew up and they broke up.

A few years later, she went to college and met a responsible young man who shared her values. Her biological clock is ticking and this man is not only a good friend, but a successful academic and already has an executive position lined up for when he graduates in a few months.

The old boyfriend, the juvenile delinquent--he's done hard prison time. Since his release, he has written a book about why his crimes were justifiable and arguing that no one in the future should be arrested for the same kinds of crimes for which is he guilty. Further, he mocks people who obey the law and has no respect for self-discipline or education and the sacrifices required.

Your daughter and the new boyfriend have come to you to ask for your blessing so that they can marry. They are both informed that not only will they NOT marry, but that the father has arranged for her to marry her old boyfriend and he will also be given a high position in his corporation, a corporation that has existed for generations.

Yeah, that's what just happened here. And it's going to keep happening.

And that’s when the daughter says “naff off” and walks away!