ANCIENT LITURGY, MODERN LITURGY, ONE APPEALS TO INTROVERTS AND THE OTHER TO EXTRAVERTS OR ARE THOSE INTROVERTS ON THE AUTISM/ASPERGER’S SCALE MORE COMFORTABLE WITH THE ANCIENT ROMAN MISSAL COMPARED TO THE NOVEL ROMAN MISSAL? 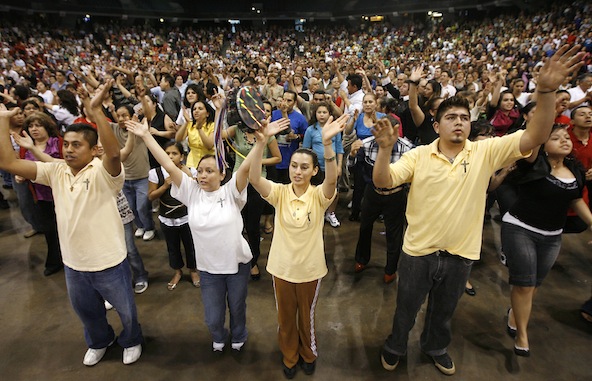 As a disclaimer, I am an introvert who has to work hard at being extroverted and it drains me emotionally. Most true extraverts are energized by their extraversion.

I think I have discovered an insight about me and the various levels of autism/Asperger’s syndrome as it is related to introversion. I don’t like a lot of communal excitement and it makes me uncomfortable.

The example of that Italian priest  in a manic mode whipping up mania in his congregation at a nuptial Mass made me extremely uncomfortable and not just from a liturgical point of view although that was a part of it also. I don’t like being manipulated emotionally by mania. Period!

I can remember toward the late 1960’s when I learned that Catholics I knew who loved the Mass as it was commonly celebrated prior to Vatican II had become charismatics. They had converted to a more exuberant  external extraverted manifestation of their faith which seem so incongruous with the quiet spirituality and internalized, introverted (autistic?)  spirituality of the pre-Vatican II Church.

Their corked up Catholic form of spirituality had popped and like champagne, it was spewing all over the place in an exhibitionist sort of way. Good grief!

Of course the neo-Pentecostalism of the Catholic Charismatic Movement was clearly aligned with the spirit of Vatican II’s protestantizing of Catholic liturgy and spirituality with its manic ecumenism.

But let’s face it, the exhibitionism of some Protestant forms of spirituality especially experienced in the Pentecostal movements of Protestantism’s divisions is what extroverts like, not those introverts with some issues related to the various experiences of the Autism/Asperger’s scale.

Are all things equal? Or are those who are considered disordered liturgically and spiritually due to some tendency towards introversion of the  Autism/Asperger’s scale, considered inferior and second class in an extroverted post-Vatican II anything goes, exhibitionist Church?

I am an extravert and prefer the EF. The OF as typically celebrated is banal beyond belief and boring. Why do you think Hollywood continues to use the EF or liturgies with EF sensibilities and traditional Catholic music in its movies?

I've never been to a Pentecostal Mass. I kind of would like to take a peek but would also like a easy exit. How long do they last? Pentecostals Protestants I hear, take at least 2 hours. Do they dance and jump around? Isn't Allelujah Community Pentecostals?

Q, Catholic Charismatics are a bit more measured than the Protestants who taught them how to be Pentecostal. They raise their arms in prayer, some speak or chant in "tongues" and often when many join in, it sounds like Gregorian Chant! They also prophecy, meaning they have messages they believe to be directly from God, God speaking through them (which I find dangerous and fraught with the possibility of spiritual abuse). They also practice "deliverance" a kind of exorcism which, technically, Catholic laity should not do. They also have a horrible practice of headship and submission, meaning that in their communities, some owe an obedience to someone over them, like an elder. This too enters dangerous territory and is fraught with the potential for abuse. A lay person in lay life should never pledge obedience to another lay person!
The Alleluia Community has some of these elements and their Masses and prayer services would include a more exuberant experience of prayer that might include dancing.

Father actually one appeals to Man and the other God