Here’s a still screen shot of a hyper Italian priest in Italy and under the “pope’s nose” who thinks the liturgy is all about him and the congregation having a blast during a nuptial Mass. What is truly sad, though, is that the congregation loves this and is really into it. It’s a pep rally masquerading as a Mass. But no, this isn’t the major liturgical problem in the Church today. We know it is the ancient Roman Missal Mass that is the atrocity. 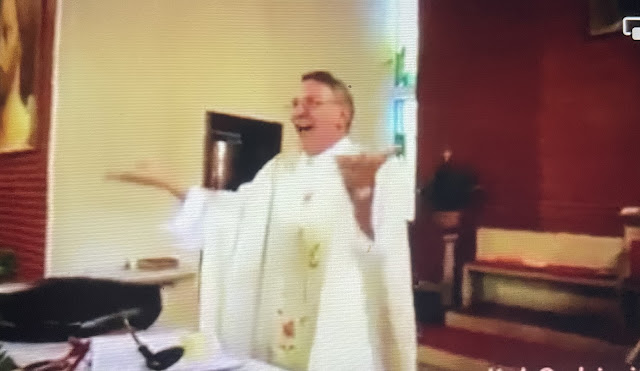 VIEW THE VIDEO HERE, IF YOU DARE!

I won't disparage his enthusiasm, however, and to me, it's misdirected energy and is totally undignified. This has reduced the sacrament to entertainment and is so extreme, no wonder people choose wedding "venues" not understanding why receiving the sacraments and receiving them in church is so important. Do better and act like the adult that you proport to be.

Spot on! Catholicism in the US is in free-fall and clowns like this priest thinks his puerile antics are the solution