CARDINAL KREJESKI, MY MAN FOR THE NEXT POPE! 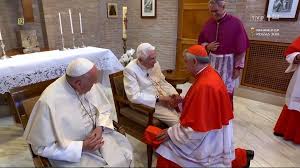 Pope Francis has given an interview to defend his lackluster, anemic response to Russia’s criminal war on Ukraine. You can read the Crux article here.

But Pope Francis admitted that Cardinal KREJESKI was the one who got to him to rectify the pastoral debacle of the Good Friday Way of the Cross at Rome’s Coliseum:

(The Pope) also acknowledged that, after the reaction from Ukraine over a woman from Ukraine and another from Russia carrying the cross during the papal-led Way of the Cross on Good Friday, (Cardinal) Krajewski insisted that the prepared meditation not be read.

“They were right, even if we could not fully understand,” Francis said. “They have a susceptibility; they feel defeated or enslaved because in the Second World War they paid so much. So many men died, it is a martyred people.”

As you know, I am no PF fan, but you may not recall when the invasion took place, the Pope went to the Russian Embassy in Rome to voice his concerns. That was pretty direct

The Patriarch of Moscow's stance is troubling to an outsider. I suppose the Church's survival might become jeopardized should otherwise happen. The damage of that stance, unfortunately, will take years, perhaps generations to repair and their moral authority cannot have been enhanced since the beginning of the invasion. A-Z this unprovoked invasion is a supreme disaster that will haunt Russia, the Moscow Patriarchate and the people hoping for a thriving/contributing society for generations. Imagine the "brain drain" that will likely descend upon Russia as the young and educated leave for opportunity elsewhere - opportunity that won't likely be returning for the foreseeable future. Imagine the negative impact on religion, the recovering ROC, culture, the arts. Truly sad.

The jig is up for fake Catholic Bishops and Priests: Biden said we need more pro abortion senators and congressmen! So when you vote Dem you are voting for Intrinsic Evil. Will PF laud the reversal of Roe v Wade or just continue to blather about the evils of abortion with no concrete action. He could tell Biden that his statement has earned him excommunication!

Fake Catholic Pelosi, legal braintrust, came up with this howler on the reversal of Roe v Wade:

“Make no mistake: by striking down Roe v. Wade, the Court would pave the way for Republicans to obliterate even more of our freedoms. As drafted, Justice Alito’s argument — that women are not entitled to basic human rights today because they have been denied those rights for generations — is alarming and extremist. This draft ruling offers a dangerous blueprint for future assaults on some of our most cherished rights, which are rooted in the long-held constitutional right to privacy.

“By eviscerating women’s fundamental freedom to full reproductive care, radical Republican-appointed Justices are poised to inflict unthinkable suffering on tens of millions of families across our country, especially in communities of color and low-income communities. Democrats believe that every woman everywhere has the fundamental human right to reproductive care, one that is not limited by background, income or zip code. Her health decisions, including whether or not to terminate a pregnancy, belong to her."

Clap for her, Father K!

Ukraine was played by the EU and NATO and now the poor people are suffering because of the failure of their leaders. Also don’t forget that since 2014 Ukraine has been battling in Eastern Ukraine against the ethnic Russians living there.

Not another cent to Ukraine e until their own oligarchs start paying up, but that won’t happen as they own the Biden Crime family.

This war is not our concern but the concern of the Europeans. We’ve saved Europe 3 times since 1918 and NO more. Our focus should be in the Pacific and China and for what they will soon do GAINST Taiwan which will push us into a depression.

Another point I guess Our Lady didn’t think much of Jorge consecration is anyone surprised?

Here’s what I think of your favorite papal candidate.

One third of the angels fell from heaven. I fear the same number of clergy have also fallen from grace through their sodomy.