THE NEXT POPE—WHAT QUALIFICATIONS WILL BE MANDATORY AND BY THAT STANDARD WHO WILL BE RULED OUT? 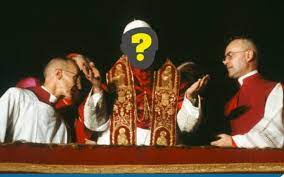 Pope Francis’ criteria for selecting new cardinals is both noble and corrupt. His Holiness chooses candidates from the peripheries who no one knows and who have no known track record except they are aligned with the Holy Father’s ideologies and come from the peripheries except for those minority of candidates who don’t. I would not see San Diego as the periphery but certainly Los Angles has far more Catholics of every ethnic background from the peripheries living there plus an archbishop which this pope has marginalized—one who heads one of the largest archdioceses in the world and evidently well given how big it is and how corrupt the previous archbishop/cardinal was.

But one wonders what kind of vetting took place. This pope has promoted some very questionable people to the episcopacy, some who are now in prison or should be, very much in the vein of Cardinal McCarrick.

One new candidate come from a region so small (smaller than my parish) that it is not even a diocese.

How can a candidate like that lead the world-wide Church as the Bishop of Rome?

How many of these candidates from small places and dioceses are capable of what it takes to be pope, intellectually, morally and administratively, not to mention the debt of their Catholicism?

So, what would be the most important criteria for the next pope?

He must be able to speak Italian fluently, like Pope Saint John Paul II, from Poland, Pope Benedict XVI, from Germany and Pope Francis from Argentina (but technically Italian).

How can a pope be the Bishop of Rome and at the same time not speak Italian nor have the gift or ability to learn it and fluently?

So, the main criteria for the next pope is that he be fluent in Italian. All other traits are on the table!

I understand some of your practical concerns but there have been Popes who did not speak Italian or Italian very well. English is the lingua franca of the world today, so the ability to speak English may be far more important. Also, a Pope not speaking Italian might spark a renewal of Latin as envisioned by St. John XXIII in Veterumm Sapientia. Just a thought.

At the bishops' synod at the Vatican in 2015, the prelates had to be divided into a dozen or more language groups in order to ensure effective discussion. Maybe that many languages won't be necessary at the next conclave, but just using Italian won't be feasible in the way it was in 2013 or 2005; maybe they'll have to hire some simultaneous translators, or use the ones who work for Vatican news!

Lots of the current speculation about papabile cardinals seems to assume that Pope Francis will be around for a while yet, since figures like Tagle, Grech and even Zuppi are still a bit too young to face a realistic chance of being elected. I'd be surprised if someone younger than 67 or older than 76 were to be chosen (it seems unlikely that the cardinals would elect a retired metropolitan such as Bagnasco or retired curial official such as Sarah). That leaves around 60 active cardinals as possibilities. Most of those have a pretty low profile, and I wonder how many of the electors know much about cardinals like Bozanic, Kovithavanij or Souraphiel? Others have a higher profile but not in a way that's likely to get them elected (e.g. Burke and Marx). I don't see them voting for curial officials who have not served as a diocesan bishop (e.g. Parolin or Mamberti). Out of the remaining cardinals, the ones best known for speaking multiple languages fluently are Peter Erdo and Odilo Scherer, so maybe they're the ones to watch.