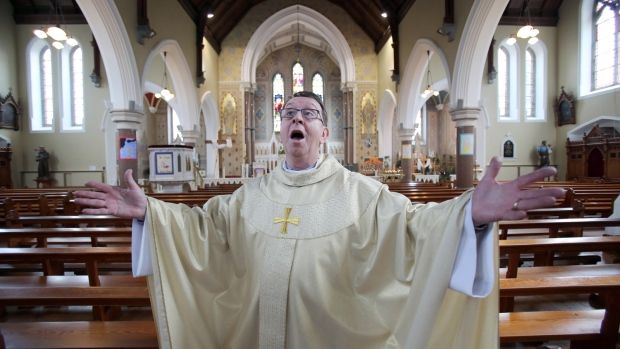 Some may call it a blessing or a curse, but the Ordinary Form Mass is so fluid that one can do what one pleases with it within parameters of the rubrics which too, are fluid, or too fluid.

You can have some Latin or none or multiple vernaculars (the latter most despised by almost everyone).

You can sing the Mass in its entirety or only some parts. Seldom are the Old Testament lessons and the Epistle chanted and maybe on special occasions, the Gospel might be chanted.

On Christmas Eve, our newly Ordained Roman Parochial Vicar was the Celebrant and I con-celebrated. This was the Family Vigil Mass and normally the homily is geared toward young children. My PV decided to chant the longer version of the Gospel which includes the genealogy.  He gave a great academic homily on Jesus’ human lineage. He also chanted from Preface Dialogue through the Per Ipsum and Great Amen the Roman Canon.

Thus the entire Mass was chanted, save the OT lesson and Epistle.

In my 40 years of priesthood, I have never chanted the Roman Canon in its entirety. To add solemnity to High Holy Days, like Christmas and Easter, I might chant the Epiclesis through the consecration but not the whole prayer.

Of course, in the Tridentine Mass, the Roman Canon is never chanted and prayed in low voice if not silently. The Preface dialogue and Preface are chanted and the Per Omnia at the end of the Canon.

The Sung Mass in the EF is tightly prescribed. No winging it or adapting it. There is no fluidity whatsoever.

The performance aspect of chanting the canon could have been alleviated somewhat by an ad orientem posture of the priest but not entirely.

What is an "academic homily?"

You can make it better if the priest turn toward the Lord. But it is still not perfect. God deserves better. As far as homily, unless it deals with the great issues of our time in some important way, abstract theological discourse is worse than useless. Homilies tailored to children should be substantially the same as given to adults. Good Christian education, I was once a child and know what I am talking about.

WHENEVER the Mass or parts thereof takes on a "performance" feeling, instead of true worship of God, it is off-putting.

I watched the Christmas Eve EF Solemn High Mass livestream from St. John Cantius and at the end of the Mass, the lights were turned almost completely off, and the exiting procession was accompanied by a very quiet and solemn sounding "Silent Night" which was sung by the Canons who acted as choir, with accompaniment by a single violin (one of our priests has a Masters in Music and is an accomplished violinist). It was beautiful and all, but it turned me off, because it was so much like a performance. I was sorry. And I think it reflects the loss of the guidance of what "restoring the sacred" means from Fr. Frank Phillips.

It seems whatever is chosen among the options available at Mass, the motive should always be the worship of God, and done solely for His greater glory.

Wow! I love your Parochial Vicar! If only all priests would do that! And to chant the entire genealogy of the Lord is spectacular! I believe that this is always done in the Eastern rites. Chanting like this moves the Romans closer to their Eastern brothers. Also, the priest puts on special garments to offer the Holy Sacrifice of the Mass; why not also put on special vocal vesture: chant the Mass! The ritual is so much more beautiful that way.

When the new ICEL translation arrived in 2011 I downloaded the chant version and sang it through to myself, including the lessons (the ICEL website shows you how to point the readings in the most commonly used English versions). It was an interesting experience and I wondered whether at least some of the fabricators of the Novus Ordo were thinking along these lines.

How many lay readers would be able or willing to chant the first two lessons? Not many, I suspect. The reason for cantillation is that it makes the words understandable in a large space, but it can be argued that the microphone makes up for this.

Be that as it may, chanting the Gospel on major feasts has much to recommend it.

I wish sometime some parish would have the cantor do the Proclamation of Christmas that's in the Missal that few are even aware is in there in an appendix. And on Epiphany The Announcement of Easter and the Moveable Feasts. But again, the pastor has to actually know they're in there in Appendix I and want to do them.

PS in the comments section under the YouTube clips of Gregorian chant I have been pleasantly surprised to read Protestants, Buddhists, Muslims and even agnostics and so on acknowledging something especially holy and spiritual and universal etc in most Gregorian chant music.

I second JR's comments. The Proclamation of the Birth of Christ is thrilling! It sets the birth of Christ squarely in history. This should be solemnly chanted by a single cantor just before the Midnight Mass of the Nativity in every Catholic church. It is done around here in some of the Churches in Portland, Oregon. It should be done everywhere! The Announcement of Easter and Moveable Feasts is not quite as thrilling to me because we can all follow these things on calendars which we all have now. Still, it is an ancient and venerable custom.

Gregorian chant is often marketed as 'mood music' and is quite often played softly in European churches in order to provide am 'ambience' for visiting tourists. Go to Mass there and it will be conspicuous by its absence.

I find this disturbing, since Gregorian chant gives priority to the text and loses its raison d'etre when divorced from its liturgical context.

The Divine Liturgy is chanted in entirety. As such, you acclimate to singing for long periods such that becomes second nature. I can cantor the responses, antiphons, epistle, creed, hymns and panachida (memorial service that be held after the ambon prayer) going about 1 hr 20/30 mins before my voice really starts to tire. For liturgies of this length, I always hope for a longer homily to be able to dissolve a cough drop! If done well, it should sound like a seamless exchange between the priest/deacon and the people.

I've heard the OF eucharistic prayer, III I believe, chanted (with the tower bell ringing) and to my Byzantine ear, I quite liked it. Not sure everyone in attendance felt that way but, many might not have been used to hearing "Take, eat, this is my body etc." being sung.