IS IT POSSIBLE TO CRITIQUE MODERN MUSIC SUNG AT MASS TODAY AND NOT BE MARGINALIZED OR SHAMED FOR DOING SO AND BEING CALLED A CLOSED MINDED TRADITIONALIST AS THOUGH THE WORD TRADITIONALIST IS A FOUR LETTER WORD? 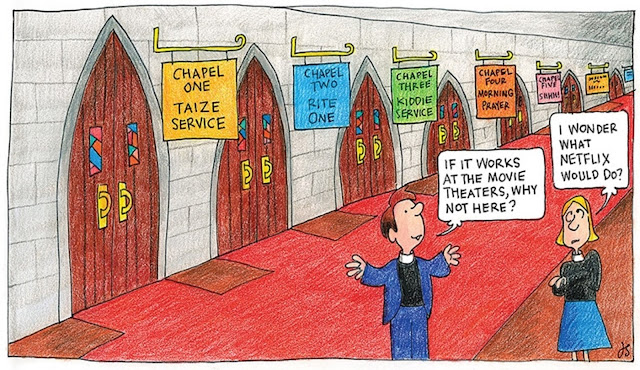 Communion on the floor and the trinity of disorientation

This is from a much longer essay on so many things including a loss of Catholic belief in the Real Presence in congregations which celebrate the Ordinary Form exclusively. Read the whole article HERE.

Here is the music excerpt by Robert R. Reilly:

Music at Mass is supposed to be a form of worship. So seldom is this the case that I assiduously seek out Masses at which there is no music. This was my experience at a local church’s Sunday Mass. The Kyrie began rather beautifully, but then the tempo picked up and the bongos kicked in. When I vociferously complain about this kind of thing to my wife and children, they respond by saying, “Just don’t pay attention.” However, my avocation as a music critic for some 35 years means I can’t not pay attention. Therefore I am caught in this interior struggle between my revulsion at the banality of the music and my need to immerse myself in the reality of the sacrifice of the Mass. Should inducing a spiritual crisis be the effect of liturgical music?

Does God deserve this music? It’s not for God. It’s for the congregation, which so frequently applauds after the performance. Applause in church is a dead giveaway of the loss of liturgical music’s purpose. I have never heard anyone applaud after Gregorian chant. Because of the sense of the sacred it conveys one naturally wouldn’t applaud. One of the blessings of the coronavirus crisis is that the choir and the bongo player have gone for the time being. Who knew that social distancing could be so aesthetically pleasing?

I know a parish music director who was brought back to the practice of his faith by the more traditional church music, including some of the Renaissance polyphonic masterpieces, the pastor had asked for. How many people have returned to the faith after experiencing the banality of the bongos? If you think I’m rough on this stuff, listen to the great Peter Kreeft:

But don’t even think of mentioning ‘contemporary Christian rock’ in the same breath; it’s an insult to rock as well as to Christianity, and it’s almost as painful as those spectacularly silly, sappy, sloppy, sentimental, shallow, stupid examples of emotional diarrhea called ‘praise choruses.’

It is unbelievably condescending to play this trash to congregations. It is a way of telling them that they’re incapable of appreciating anything better – like real beauty. The poor dears, especially the youth, couldn’t be reached without cloying sentimentality. Let’s all “feel” together. It is the liturgical equivalent of the Modern Romance paperback novels sold at grocery store checkout stands. There is no intimation in the emotional bathos of how vast a treasure is present.

Reilly writes: "It is unbelievably condescending to play this trash to congregations."

He sould look at his own condescension in the opening of his piece: "The Kyrie began rather beautifully, but then the tempo picked up and the bongos kicked in. When I vociferously complain about this kind of thing..."

He proclaims snobbishly that his taste, his preference, his appreciation of music in general and sacred music in particular is FAR, FAR superior to the banality of that of the person who chose the music for the mass he attended.

The music should help the ‘mood’ of the Mass in general but also the particular season and feast. The problem with many modern settings is that they are based on the limited ability of the music director. So if bongos are his favored instrument, then every Mass is in danger.

A@8:30 AM you make my point, there is absolutely no way to critique bad liturgical music because there is always someone who loves it. No objectivity, only subjectivity.

Thank you for sharing his thoughts with us.

Secondly, Gregorian Chant has the advantage of fitting the tone to the text, while popular music, in its ever splintering forms--reminiscent of the Protestant Reformation in that discordant, ever diverging way--must fit the text to the pulsating tone, thus barbarizing the sacred texts we would wish otherwise to convey. And so we find ourselves singing some copyrighted hymn whose text was composed for profit, rather than singing the Psalm or other Biblical texts around which the music should humble itself.

Finally, we should recall that in 1974 Pope Paul VI sent to ever Western bishop a copy of those Proper Parts of the Mass which the faithful, in conformity with the command of the Second Vatican Council, must be taught to sing in Latin. These chants include the Gloria, the Credo and the Pater Noster, along, of course, with the Sanctus and Agnus Dei.

Fr. McDonald, you are wrong.

There is most certainly a way to critique any kind of music, be it Bach or the Bossa Nova.

You don't do it by saying, as Reilly did, "I complained vociferously to my wife and children" about how much the music didn't suit his taste, how much it was not to his liking.

You don't say "I don't like it, therefore it is obviously banal and unsuitable for use in worship."

If you want to list the thing that, "objectively," make some music better and more suited for worship, go right ahead.

I attend Mass at St. Anthony of Padua in Ray City, a nice innocuous, semi-rural Novus Ordo parish. I have loved going to Mass these past several months because there has been no music. After decades of insipid "liturgical music", it is wonderful to go to Mass and just PRAY without distractions. However, it has recently been announced that future Masses will be having music and I am disappointed more than I can describe. I'll leave it at that.

If you wish to appear open-minded, have an open mind.
If you wish to be called a close-minded traditionalist, criticize each and every facet of church liturgy, hierarchy, language, art, celebration and architecture that doesn't reflect the Church of 1500 (which was, of course, a Church in turmoil, rent by revolution and rivalries. As Billy Joel reported, the good old days weren't always so good.)

Music AND rites were never originally intended to be lusty, rousing, shallow, emotive feel-goodism such as the political theater of patriotic songs, but meant to inspire interior calm recollection to further placing one's self as an offering in the presence of God rather than things of the world.

The modern trend is all towards shallow emotionalism in an artificially imposed attempt to manufacture "feelings", and truly all about self and what self GETS out of it, rather than what one GIVES, and all in calculated and very mega-churchish blatant marketing to draw crowds and collections.

They should instead try teaching folk how to truly and unmistakably experience and live in the presence of God in returned love, day in and day out.

Unfortunately, even many "traditional" churches flop miserably in having anyone there who can confidently lead a seeker to truly experience God by following simple directions, and instead are also essentially only marketing, except to a different demographic.

I avoid the problem by going to the EF Mass exclusively. Gregorian chant and the treasury of Latin sacred music from the ages including this century is reason #458,936,487 to go to the EF Mass.

There is certainly a way to determine if music is ‘bad’ by how it is composed, played, or presented. Then there are the lyrics, which were the first complaint of many about the ‘modern’ music that infested the Mass since 1975.

English speaking bishops here and around the world and including the Vatican, have turned liturgical music and hymnal publishing over to business ventures of compost and publishing houses and turned the liturgical music into a big financial business.

If the Episcopal Church in the USA can have an English national hymnal, why not the USA. Bishops need to take control of hymnals for theological suitability and liturgical suitability not composers or publishing houses!

rcg - Any music can be played badly, but that doesn't make it bad music. I'm not sure what "presentation" means in terms of music.

So what, then, constitutes "bad" composition as we think of music for use in church?

Bad music was condemned in the 1800’s I think. The Mass set to secular idioms such as various well known composers at the time like Beethoven. Beautiful compositions for a concert but not an actual Mass.
Today music religious words set y to o folk, jazz, Broadway melodies, rock, country, contemporary or whatever fad should be sung at concerts, played on Christian radio or sold for profit but not sung at Mass.

Would those be sounds like "Gypsy's Turn" or "Ol' Man River?"

Might they be "Some Enchanted Evening" sounds or "Ya Got Trouble" sounds?

Could they be sounds like "You'll Never Walk Alone" or "If I Were A Rich Man?"

There's an almost boundless variety of "Broadway melodies" from which to choose....

And these vastly different Jazz sounds, could you say what about them individually or as a group disqualifies them?

By presentation I refer to appropriate tunes and lyrics for the Mass versus mere favorites of the music minister or even the congregation. I am receptive to the idea that the congregation can join in singing some hymns at certain times but I am not sure that it is ever necessary. The Mass has a theme each day and the music should support that. For may years the music seemed disconnected to the Mass, an adjunct that risked distraction and interference with the liturgy. This is where I agree with the author that the music selection expressed contempt for the laity rather than assisting them to reach for the sublime.

How abut religious words to Edelweiss . Heard it repeatedly in 70’s and 80’s. Heard a Fathom of the Opera ditty too. How about Sunrise, Sun Set? One Tin Soldier? Les Miserable’s ditty’s too. Let’s see, how about the Beatles, Let it be? And then there is Westside Story, Maria... namesome others.

Good father, my point is that there is no "Broadway melody" just as there is no "Jazz Melody." The music on both genres is tremendously varied. So to disparage "Broadway Melodies" is pretty a amorphous suggestion.

There have been hymns set to "popular" tunes - by popular I mean tunes that were not specifically written for worship. Just as we sing "My County Tis of Thee" to the tune of "God Save the Queen" there can be perfectly good lyrics written for perfectly appropriate melodies.

One example:
Come dear Lord, be our guest
As we gather together.
May our heart glow with love,
Keep us close to you ever.

Don't like them? That's fine, but your likes and/or dislikes don't make melodies good or bad.

There is a Broadway sound as there is a folk sound, Celtic, etc. usually the stereotype is much more narrow than the actual genre allows. But the scales and progressions are designed to make the tunes popular and singable by the average guy and gal. Minor keys and blues progressions are popular, too. But get into modal music and some other traditional patterns and you risk losing your audience. There are popular English folk and Celtic tunes that have made their way into the Mass through Marty Haugen’s Ellis Island of Praise hymnals, renamed and altered to make them more accessible and acceptable to the laity.

Maybe it would be better for all of us to remember that we are at the foot of the cross when we attend Mass.

How clear do we have to make this?