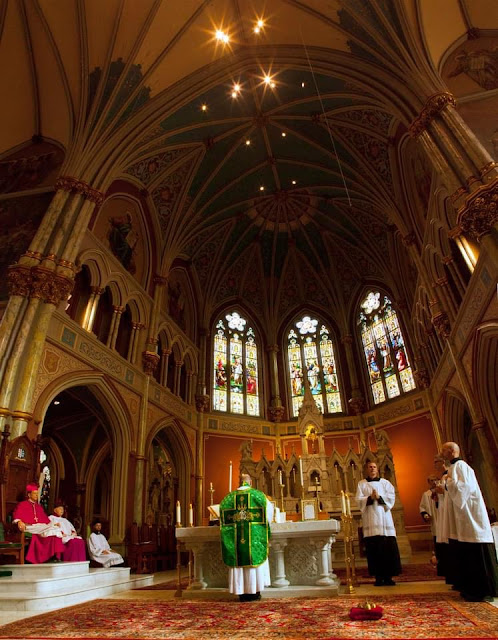 I have had numerous conversations with parishioners who love the EF Mass but are frustrated that they can’t follow it or don’t know what is being prayed and when it is being prayed.

I have asked this before and I continue to promote it. Here it goes:

At both our Cathedral Basilica and my parish, a lay lector simultaneously reads the Epistle and Gospel at the ambo as the priest reads it at the altar in Latin but in low, very low, voice. Why in the name of God and all that is holy, could there be installed “readers” vested in alb or cassock and surplice who read the Epistle at the ambo, while the priest sits at the sedelia for it and the Gradual/Alleluia without having to read these at the altar while a lector reads the Epistle and the schola chants the Gradual/Alleluia?

Why can’t a permanent deacon assist and a Missa Cantata as he would in the Ordinary Form and read the Gospel at the Ambo as the celebrant stands at his sedelia? Why can’t the rubrics be adjusted for the use of a deacon at a non-solemn sung Mass?

And this is the most important. Why in the name of God can’t the changing parts of the Mass be prayed in the vernacular and these specially, the Collect, the Secret (and prayed out loud) the Preface (thus allowing for the richness of prefaces from the OF Mass) and the Post Communion Prayer?

If these minor adjustments to the Ancient Latin Mass were made, I guarantee you that more priests would offer this Mass in their parish and more Catholics would attend. No doubt about it!

The FSSP, as a norm, reads the propers during the homily, if there is one. If there is no homily, as during a weekday Mass, we don’t hear it. It isn’t hard at all to follow.

The liberals suppressed the TLM until Pope Benedict XVI saved it. Foolish to give them ammo to do it again. Many TLM parishes have missals available and the Propers are also available in English online.

With all due respect, Father McD, I don't agree. No more changes! At least not to the EF Mass.

I am in no way promoting this, but St. John Cantius in Chicago put together a new modern day Latin Mass missal, which contains the Mass prayers and the prospers for each Sunday and Holy Day of the liturgical year. It doesn't have any additional devotionals you might find in an old fashioned missal (like Benediction), nor the daily Mass propers, but it gets the job done for what most people need.

It costs $15 for a single copy, but there are discounts for multiple copies ordered, which, I suppose, if a parish would like to provide these for their EF masses, would be most economical. You can find the information at Biretta Books, which is a ministry run by the Canon Regulars to provide traditional religious goods. https://www.birettabooks.com/latin-mass-companion.html

I think the key to the problem you describe is not to change the Mass, but to get the people in the pews aids for them to worship properly.

Why not allow the use of what I call the "other OF" for the Ordinariate Form used by Anglican-Use Catholics in their ordinariate?

Please listen to your poor frustrated parishioners! No changes, no minor adjustments of the Latin mass will ever persuade the majority of Catholics to prefer it to the Mass of Paul VI.

I remember once having read the Epistle in English while priest said it in Latin at the altar, ca. 1960. It was, however, outside the chancel, beyond the communion rail. It was during some CYO function or other. Maybe there's presidence.

Get a missal. it's not that hard to follow along. Also, worship is not primarily an intellectual exercise. While the Priest or Schola are chanting in Latin we can be offering up our own prayers from the depths of our heart. if someone takes a few minutes to read through the Propers before Mass they can enter prayerfully into the mystery as the Latin is chanted.
Also, Maybe we should fix the NO Mass before we tinker with the EF. You already have all the English you could want available in the NO.

Saint Michael the Archangel defend us in battle....

I am puzzled that no one wants a revision of the EF Mass if only minor, especially since more people attending the ethos of this Mass would be so beneficial to the clergy and laity who are there.

I would prefer, though, to make the OF Mass more like the EF Mass but on an institutional basis, not congregationalism or clericalism. The Ordinariate’s Missal could be the way if permission to celebrate it was given, or a version of it without the “Anglican” accretions published.

In my own illicit way I used that Missal but maintained the Latin for the laity’s parts as the English parts for the laity are too different in English from our normal English Missal. I eliminated the Anglican options for the EF options found in this missal’s appendix, especially the PATFOTA.

That Missal with the adjustments I allude to could easily replace the current OF Missal while maintaining its lectionary but with the traditiaonl Gradual/alleluia/tract option, and the season of Septuagesima added including ember days.

To me, the TLM should be left intact and unchanged. As was rightly pointed out, there are sufficient opportunities for attendees to follow in their missals or, printed sheets etc. Let's limit the endless tinkering to the NO and not start down the path of morphing the TLM into something unrecognizable. One liturgy that has become overly hybridized is more than enough. My suggestion: Why not just make the NO more EF like with vernacular readings at the ambo while the celebrant sits on the sedalia? This is how the epistle is delivered during divine liturgy - a reader chants the epistle from the nave while all, including the priest, sit and listen. No movement or, other actions like incensation are to occur during this time. A more rubicly EF NO might bridge the gap better than the other way around. Having attended the NO both ad orientem and in the vernacular, I think the people would have been more at peace had this been retained than what was done and what it ultimately morphed into being. Cluttered sanctuaries could be tidied by removing all the superfluous furniture that has crept in during the last 50+ years. The NO is the problem, not the TLM.

What you appear to be hankering after is the so-called interim rite of 1965 which was never intended to be definitive. I remember as an altar boy serving the weekday Mass c.1965 and reading the Epistle, Gradual and Alleluia in an approved translation.

The 'Mass of Paul VI' is defined by its Latin text and is therefore essentially a Latin Mass. The chants between the readings may be taken from either the Lectionary or the Graduale Romanum. Some people maintain that there is no Offertory chant in the new rite, but this is incorrect - it can be found in its proper place, which is the Graduale Romanum as revised in 1974.

In a Solemn Latin OF Mass the readings are usually in the vernacular and the celebrant remains seated. The deacon proclaims the Gospel, there is a 'subdeacon' for the Epistle and the OT reading can be done by a layperson.

Personally, I prefer a sung Latin OF Mass to a Tridentine Low Mass, despite the 1970 Lectionary. Most EF devotees would disagree.

I concur with your sentiments. No-one wants a plethora of options in the EF Mass, with bits of the vernacular inserted at the whim of the celebrant.

I think that any parish that offers an EF Mass on Sunday should offer a daily EF Mass as well. Then those that attend the EF Masses would not experience the rather painful disconnect that occurs now with only an EF Mass on Sunday. Also, parishioners who want to pray the Roman Breviary of 1960 would have everything in the right context.

In 1970 the English bishops, in the interests of having the new Mass stabilized after half a decade of change and confusion, wanted one Sunday Mass and one weekday Mass to be in Latin. However, that particular horse had bolted, largely due to those same bishops spearheading the shift to the vernacular with what can now be seen as indecent haste.

In the mid-1980s I counted no fewer than sixteen churches in central London where the principal Sunday Mass was sung in Latin. I suspect there are fewer now for two reasons. Firstly the growth in the number of Tridentine Masses since Summorum Pontificum, and secondly the vastly improved English translation of the Novus Ordo.