LEST WE FORGET! THE TRAGEDY OF MILWAUKEE'S CATHEDRAL BEFORE AND AFTER BUT WITH NO AFTER AFTER!

This was a wreck in slow motion as it unfolded, AND IT WAS LATE IN THE GAME OF WRECKOVATIONS, and you see what they got. I think Pope Benedict tried to intervene to stop it. Will there ever be an after after for this poor cathedral????? 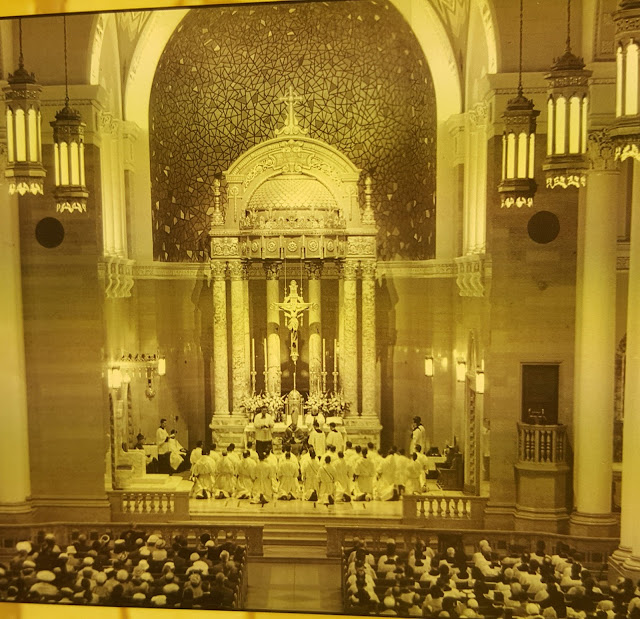 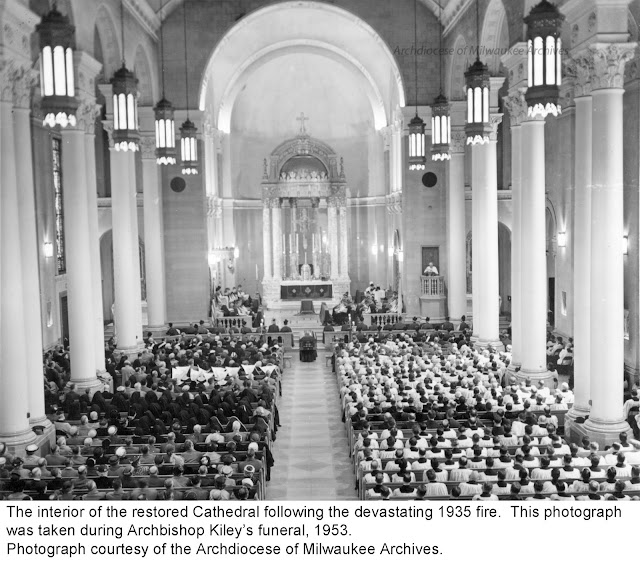 Compare the corona over the traditional altar to the "corona" over the new altar. Is this a joke????? Can you imagine destroying the original altar and corona??????? But Weakland did and with glee. Sick and masochistic to say the least. 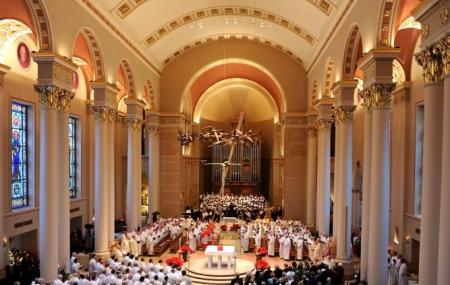 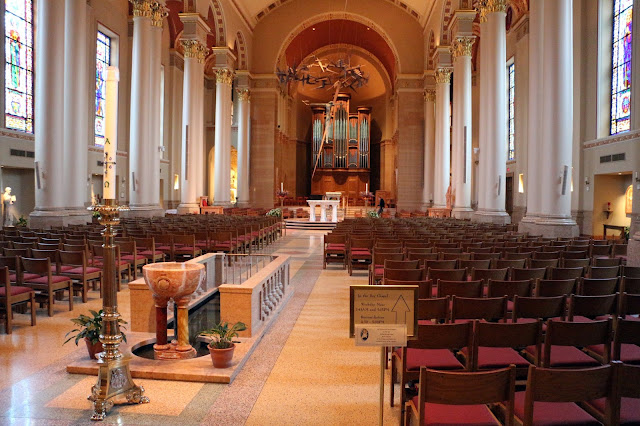 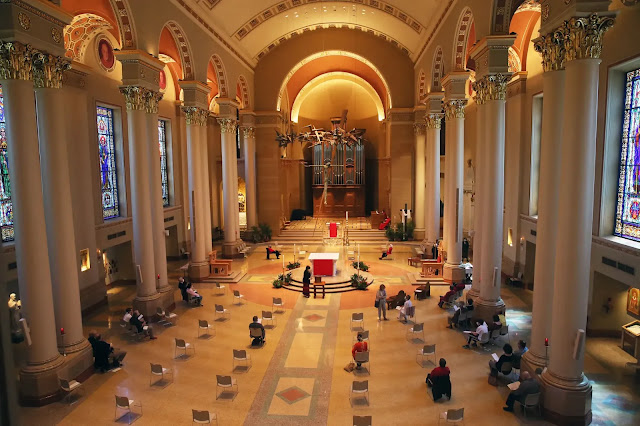 The huge nail from the crown of thorns through the crucifix and pointing to the bishop celebrating Mass below reminds me of this scene from the movie "The Omen" where an Anglican priests gets speared! 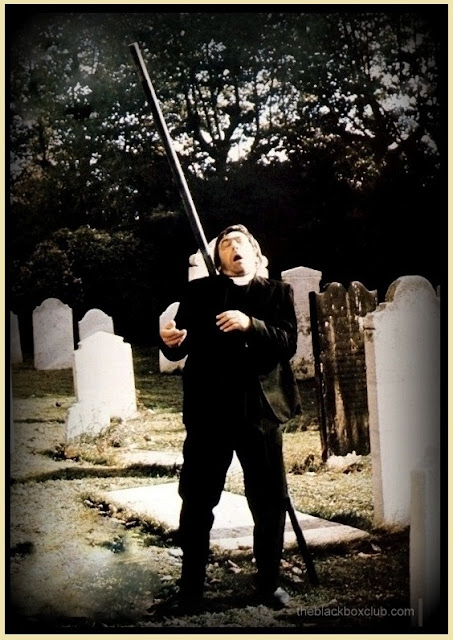 Indeed Weakland should have been laicized, not just for his flagrant breaking of his vow of celibacy in an unnatural way, but for embezzlement. While not on the scale of the kind of "Cardinal" Bicue" it is embezzlement nonetheless. He should have gone to prison as any lay person would have for the embezzlement.

Totally self-indulgent wreckovation. I truly feel bad for those that belong to and use this cathedral. The amount that will be spent to undo this, to the extent a successor chooses to do so, will be significant although with the number of closed churches, finding a high altar that thematically matches the original (or, at least the one in place after the fire) shouldn't be terribly difficult.

Wow, that's depressing. Though there's something that might cheer you up father. The pope celebrated Mass ad orientem again today! You can see it in the following link (fotos 9 and 10):

The newer set-up reflects current theology and doctrine progressive parishes by placement of the organ in the place of a high altar. The Music Dictat...err....Director is a god there.

But, I like Father's movie analogy even if I depised the book (and finished it only hoping vainly for SOME improvement by the end), and the movie (far worse than book) which was only viewed because it was free in college and rest of friends were going and wanted me there with them.

Disordered architecture from a disordered "bishop".

I was confirmed there not too long after it was remuddled. There was a little museum area showcasing how it used to look and a dedication plaque mentioning Weakland's great struggle to renovate. One of the catechists from my parish asked afterward what we all thought of it and the opinions were pretty negative. One older convert said he liked it, but admitted he had nothing to compare it to.

Romulus Augustus here, I indeed remember the Weakland era, I make no excuses about my attachment for the TLM but how long must we continue to go back and forth about the "man made" Nouvs Ordo and the True Mass of All Times? I for one wish this was the 1950's and the TLM was in place and Mass attendance was at 85% compared to 8% today, so either you accept that Vatican II was a failure or not? Facts don't lie and the facts are: Mass attendance at 8%, seminaries closed, convents closed, schools closed, hospitals closed, no belief in the Real Presence, clown masses, dancing girls, male and female lay lectors, altar girls, felt banners, rock, mariachi, folk and jazz masses, drums, guitars, pianos, hand holding, kiss of peace. Now compare the TLM: altar boys only, Latin, organ music, Mozart, Palastrina, Bach, kneeling for Holy Communion on the tongue, proper attire, Mantilla's for women, confession, incense, bells, silence, young couples with many children, the F.S.S.P., S.S.P.X.and Institute of Christ the King with seminaries packed with young men and ALL with waiting lists to get in. You tell me which is the future and what is not the answer is clear and the answer is in all I stated above.

Was there ever an investigation as to how Weakland got chosen (as archbishop of Milwaukee)?

In the book and movie the above impaled priest was a Catholic priest, not an Anglican priest.

I use to live in Milwaukee and yes what happened is a great tragedy. Weakland's defiance set the precedent for other bishops, in the years before they retired, to radically alter their cathedrals. There are many examples, but two that comes to mind are Rochester and Albany in New York. Weakland and his auxiliary, Bishop Sklba, should both be defrocked for their financial and sexual malfeasance. The question that should be asked, is this, "who in Rome has protected them all of these years?" I am told, it is one of the same protectors of former Cardinal McCarrick. Another question that needs to be asked, is, "why are their people still running the diocese?" These people are without faith and have done great damage to the Church.