There are those in high places in the Vatican who have criminal minds and God willing will be prosecuted for the grave injustice done to Cardinal Pell that screams to heaven for vengeance, I mean, justice: 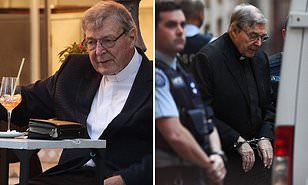 This is nasty. It could be related to the defenestration of Becciu. That’s a lot of dollars and no one in the Vatican or the Australian Church knows where it went.

It was to fund the campaign against Cardinal Pell so that he would be removed from cleaning up Vatican Finances. Justice is sweet.

I have it from a reliable source that more is breaking on Wednesday.

The report by an Australian newspaper, which drew on documents from Australia’s financial crime regulator, did not detail where the money was dispersed.

The timing of the fund transfers, and their increasing amounts, coincide with Australian Cardinal George Pell’s arrival as prefect of the Secretariat for the Economy in 2014, and his subsequent return to Australia in 2017 to face trial for sexual abuse charges.

“Unaware”...such an overused word to cover such a diverse multitude of sins, both secular and religious. Meant, of course, to send us ignorant peons on our way...

Wouldn’t this spill over into Australian government? I have the impression from Australian media that Cardinal Pell was a focus of law enforcement for some time in an effort to even a score with the Church over pederasty. Certainly viewing the Catholic Church as a cartel of sex crime is understandable, but the implication that the Victoria Police were breaking the law in order to enforce it, and doing so as part of a focused conspiracy possibly financed by foreign sources, should make heads explode down under.

Absolutely rcg! I think what is implied is that this money did not go to the Church at all and it is a huge amount, to say the least, but it went rather to those who wanted Pell in prison and in high government and law enforcement places and maybe eve those accusing the Cardinal. That's the story of the century, if true. And that is indeed being implied by Pell and others.

I wish those in Australia who read my blog would chime in. It seems to me that Australia has become super-secular with an animus toward religion in general and orthodox Catholicism in particular because Cardinal Pell and others have stood in the way of the secular agenda, especially as it concerns gender ideology and marriage.

You have to clarify your comment. Which mafia are you referring to, Cosa Nostra, Ndrangheta, Camorra, St Gallen ? The Church is an earthen vessel !

I think you could include all of that, but my use of the term mafia is the classical use of the term as it concerns the Italian Mafia, especially based in southern Italy and the model on which the Godfather movies series is based. The last movie in that trilogy was what I thought, at the time, to be the most farfetched as it concerned the mafia in the Vatican. I know longer see it as farfetched because of the mega bucks the Vatican has which is the foundation of the mafia enterprise there.

The book : “The Persecution of George Pell” by Keith Windschuttle was launched in Sydney, Australia,
on December 10th.

Quadrant.org summarises thus: “ ‘The Persecution of George Pell’ uncovers the campaign aimed not only at personally destroying one of Australia’s most influential religious leaders, but also of trashing the reputation of the Catholic Church. Had it succeeded, the campaign would have set damaging precedents for the rule of law in Australia. Pell spent 400 days in prison before a unanimous judgement of the High Court finally set him free. .......To get their man, lawyers, judges and a Royal Commission reversed long-standing legal principles, including the presumption of innocence, the onus of proof, and guilt beyond reasonable doubt. Every claim of child sex abuse, they insisted, must be believed. This is the story of profound injustice heaped on one individual and the social and legal damage caused by radical ideologues convinced of their own virtue.”

Quadrant is an Australian conservative journal/magazine published 10 times a year.

The majority of Australians could still be described as fairly socially conservative; however, Woke ideologues/leftist radicals have increasingly become VERY dominant in some key institutions, especially, the public service, education (at all levels) and the media.

That's a great summary! And the USA is on the verge of the same thing in her key institutions, especially public service, education(at all levels) and the media. In fact we may already be there except for what happen to the legal system in Australia. And oddly enough, it is all based on sexual issues, such as gender ideology, abortion, contraception and the like.

Australia’s Liberal Party is not a liberal political party in the American understanding of “liberal”. It is liberal in being pro-free enterprise, and Australia’s Liberal Party is against excessive government intervention and against excessive taxation etc; its leaders and members tend to be quite socially conservative. It is a right of centre political party. As is the National Party and so was Australia’s Country Party. Conservative parties and conservative coalitions have been in power in Australia from 1949 to 1972 (23 years) ,1975 to 1983, 1996 to 2007 and 2013 to the present. Most Australians are still socially conservative - The primary vote for Australia’s Labor Party has dropped from a high of 48% in 1987 to only 33% at the last federal election. The crazy, leftist Green Party usually gets only c. 8% to 9% electoral support but the ABC, the Australian Broadcasting Corporation is literally a conservative free zone and many ABC broadcasters and journalists are often Green-Left journalists/activists......likewise many university academics are leftist scholar/activists...The ABC, especially in Australia, is renowned for its massive bias against the Catholic Church. Our diocese refuses now to have anything to do with it and publicly said why: ie: it’s anti Catholic bias, and because it has been repeatedly unfair and incapable of being objective when it comes to anything concerning Catholicism.

Back to Cardinal Pell, he and Alfred Dreyfus would have had a lot to talk about.

I and others believe that anti Catholic prejudice now among Australia’s influential Woke, leftist middle class (especially those in the media and universities, and among leftist politicians etc) is probably greater than the antisemitism that existed among many people in France and Europe in the late 19th century and into the 20th century.

It is yet to be 100% proven re Vatican money being used to assist in the destruction, or attempted destruction, of Cardinal Pell. But most times where there is smoke there is fire, and as Cardinal Pell said last week in an interview, in this case there is enough smoke to cover the whole state of Victoria, Australia. Also, it has been reported Cardinal Pell’s closest associates have zero doubt that his Vatican enemies were involved in the legal prosecutions (aka an immoral and illegal persecution) against him in Australia.

Another summary of Windschuttle’s book on George Pell -

“How the highest levels of the police, judiciary and politicians in Australia, plus victim lobby groups, compensation lawyers, and journalists, used bogus accusations of child sex abuse to persecute, convict and jail an innocent man.”

Now it appears possible, if not probable, that Vatican funds were sent to Australia to assist in the prosecution/persecution of Cardinal Pell !!!

I intend to purchase this book from Quadrant Books www.quadrant.org.au

Father, if you could write a postal address below my family would like to send you this book as a gift.

By the way, I have followed Cardinal Pell’s career closely since I read “George Pell” a biography, by the Australian Catholic journalist, Tess Livingstone back in 2002.

Back cover of this biography: “In recent decades a war has been waged within the Catholic Church between traditionalists and those who want to drain its teachings and institutions of much of their meaning. This is the story of that struggle, told through the life of a leading combatant, George Pell, who has spent much of his adult life battling attempts to, in his words, ‘trivialise Jesus Christ’ “.

Hopefully will have a couple of stumpies in it, too.

Should have written ‘stubbies’ but was too hurried. Stubbies are the short, fat bottles of beer popular in Australia. Whatever your opinion of Australian beer, they are very tasty at the end of a hot day.

“The Australian” newspaper reported last week that Danny Casey, the former Sydney diocese business manager, who had worked with Cardinal Pell in Rome, has had his car destroyed. Luckily, Mr Casey was not his car at the time. And wrote about the possibility Cardinal Pell could have been seriously assaulted or worse as to some very violent inmates in Victoria’s prisons he was the worst of the worst, a high profile convicted pedophile; an evil child sex abuser and a very soft target - ie an elderly man with a heart condition.

Don Corleone (Al Pacino) in Godfather 3 : “We are back with the Borgias !!”

I joined the Australian Labor Party while studying for an economics degree at Sydney University a LONG time ago. Back then Young Labor had very many members who were Catholic tradesmen and Catholic labourers and unionists etc but now that is no longer the case, the vast majority of Young Labor now are university educated, Woke, secular humanist-agnostic types.....

These words by an elderly, retired Labor politician, Kim Beazley Snr really sums up a lot: