IN THE MIDST OF A SPIKE IN THE PANDEMIC, THE ANCIENT LATIN MASS I CELEBRATED AT OUR CATHEDRAL BASILICA ON SUNDAY FOR THE 4TH SUNDAY OF ADVENT HAD THE MOST PEOPLE I HAVE SEEN SINCE I STARTED MY REGULAR CELEBRATION OF IT IN 2016!

Yes, you read the headline right. The EF Mass at the Cathedral Basilica in Savannah had the most people in attendance since I have been celebrating it beginning in 2016, pandemic or not.

The schola, as usual, was exquisite. They chant a cappella. And my chanting wasn’t bad either. The only glitch that I overcame without a blip was that the MC turned the Missal’s page to the wrong version of the Preface of the Holy Trinity, the ferialis one, not the solemn one. I don’t know the simpler one and I realized it was the wrong one as I chanted the Preface Dialogue and what was coming out of my mouth wasn’t the notes written on the page. I quickly changed pages finding the right Solemn tone on the first flip!

There were a huge number of 20 somethings in attendance. After Mass, young something 20’s men as they greeted me as they departed the cathedral stated to me this was “awesome!” “I’ve never experienced a Mass like this!” Men don’t normally make such comments let alone young men.

You can see why so many men were interested in the priesthood under the pre-Vatican II ethos of the Church, prior to the so-called renewal of the Church, its supposed new springtime! Such arrogance!

No one, that I know of took photos of the Mass. The Cathedral has elaborate Christmas decoration and Crèche. So all was in place as it is a major effort to place all the decorations in the cathedral.

These photos are of the Advent/Christmas Concert that takes place yearly at the Cathedral on the 4th Sunday of Advent, only a couple of hours after the EF Mass. You get some idea of the decorations from these photos. Normally there are far more in the choir and tightly grouped and the cathedral packed. But the pandemic changed all that and only 200 were allowed to attend. 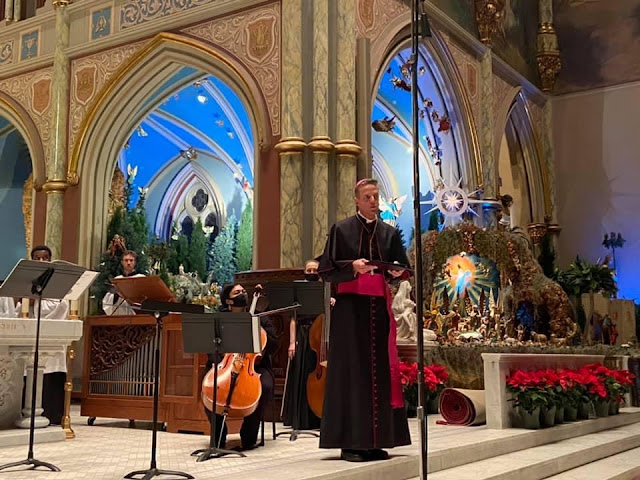 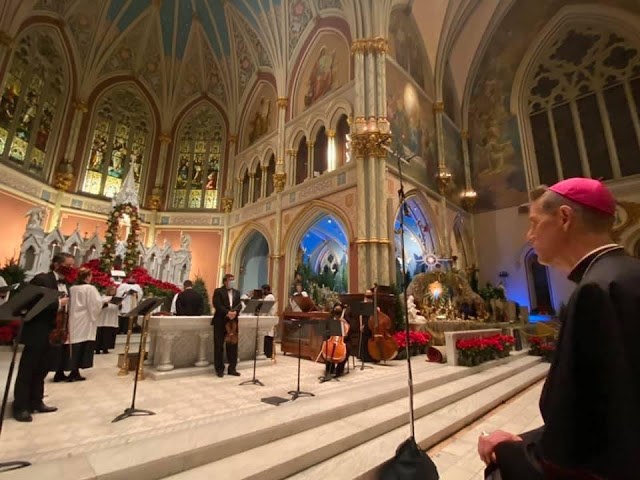 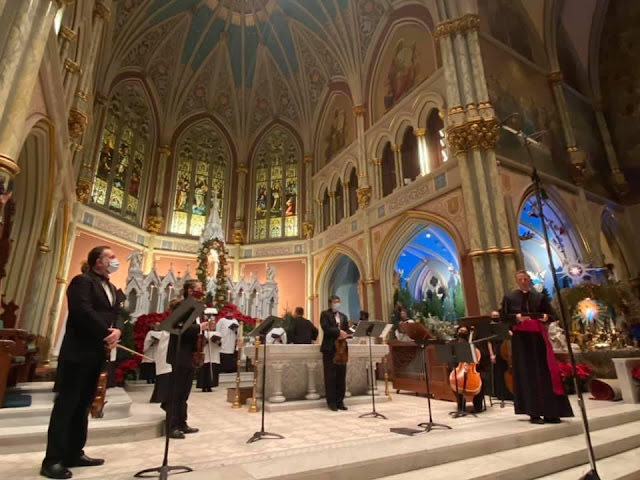 Your 20-something men would have found a Novus Ordo Sung Latin Mass equally 'awesome'. 45 years ago I certainly did, and that was when all Catholics under 30 had been brought up with the Mass pre-Vatican II. In 1974, just down from University, I went to Brompton Oratory for the first time and encountered the full works - Latin, Gregorian chant, Haydn's Nelson Mass, deacon and subdeacon, ad 'orientem', Roman vestments - and was bowled over.

Yet this was the then 'very new Mass' of Paul VI. It is my firm belief that if the novelties of the Novus Ordo in terms of music, language and ars celebrandi had been tempered by a greater respect for what may be called the traditional elements of the Rite, in particular the retention of Latin, fewer of my contemporaries would have lapsed.

It's not something that can be proved, but anecdotal evidence is still evidence.

John Nolan, I used to think the same way as you. Then it occured to me that the nice parts of the Novus Ordo were precisely those borrowed from the TLM. So....why not see those nice parts in the Mass they were built for instead of forcing them into one they were not built for? And if the parts of the Novus Ordo which are attractive are those imported from the TLM, isn't it actually the TLM which is attractive?