WHEN I HEAR THE HOLY FATHER POINTING A FINGER AT OTHERS, I CAN’T HELP BUT THINK OF THE IMAGE I PRINT BELOW

The Holy Father gives another Christmas gift to the Curia which is always His Holiness’ pointing a finger at them or others, but three are turned toward the Holy Father: 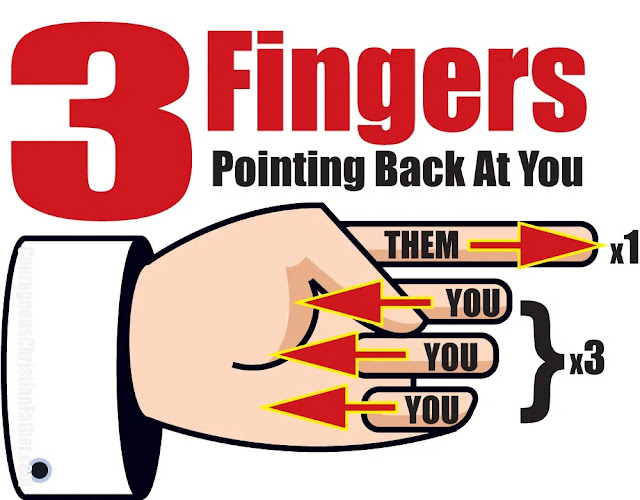 I discovered today that Wikipedia has a large entry under the title "Theology of Pope Francis".
A very interesting read. For example, I found out today on this site that for his dissertation work Francis studied Romano Guardini's ideas of holding conflicting notions in tension in a multicultural world; to respect " polar tensions" without negating any of them or reducing them to a higher synthesis; to respond to each in the light of the gospel.

I have not read many Wikipedia articles. I think I will now see what information, material etc Wikipedia has under the titles "traditional Catholicism", "the Catholic Mass" and "Catholic liturgy" etc.

I did not know, till today, the following:

“Francis’ motu propio Magnum Principium of September 3 2017 effectively countered the efforts of those who under Pope John Paul II had required that ‘the liturgy conform as closely as possible to the original Latin texts’. In his motu propio Francis said: ‘the vernacular languages themselves, often only in a progressive manner, would be able to become liturgical languages, standing out in a not dissimilar way to liturgical Latin for their elegance of style and the profundity of their concepts with the aim of nourishing the faith.’ This was seen by many as the end of the ‘reform of the reform’ movement that sought to overturn the principles of liturgical reform proposed by the Second Vatican Council, or, as Francis expresses it: ‘ to speak of ‘the reform of the reform’ is an error !’ Earlier Francis had written: ‘We cannot demand that people’s of every continent, in expressing their Christian faith, imitate modes of expression which European nations developed at a particular moment of their history’......Francis broke with Vatican tradition by celebrating a Mass in Chiapas, Mexico, that incorporated indigenous, Mayan elements.........(also) Francis distanced himself from the previous popes who gave broad permission for reversion to the Mass in Latin....Also, Francis has spoken out against efforts to encourage priests to celebrate Mass ad orientem , and Francis has called ‘the altar, the centre toward which our churches focus attention’. “

Father McDonald, I am glad that you initiated the discussion in question. This thread corresponds to something that Rorate Caeli posted a couple of days ago.

"The Year of Saint Joseph: A Great Opportunity for the Church"

The article in question, by Roberto de Mattei, included the following:

"Pope Francis can be criticized, even severely..."

Certain folks, Rorate Caeli folks, if you will, have claimed the right to criticize Pope Francis "severely."

They do so daily. They trash him. (Said folks are also keen to trash this or that Cardinal, bishop, or priest."

We also read daily that the Curia is dysfunctional...filled with bad actors, and intrigues.

But should Pope Francis offer anything that is perceived as a criticism directed against this or that person(s), well..."How DARE Bergoglio say that! Who does Bergoglio think that he is!"

"Pope Francis can be criticized, even severely..."

But how dare he criticize anyone.

I guess you are fine with PF trashing faithful Catholics. Do you think, at all?

I liked the speech. The Holy Father even alluded to Benedict XVI's "hermeneutic of continuity." The section on how the church reforms itself could have been written by Ratzinger himself.