IS IT TOO MUCH TO ASK THAT THERE BE A CANON LAW ABOUT WHAT DISQUALIFIES A CATHOLICS FROM RECEIVING HOLY COMMUNION, AND HERE I AM REFERRING TO PUBLIC PERSONS WHO DENY ESSTENIAL CATHOLIC TEACHING TO FURTHER THEIR POLTICAL AMBITIONS AND OTHERS WHO DO IT FOR NOTERIETY OR FAME 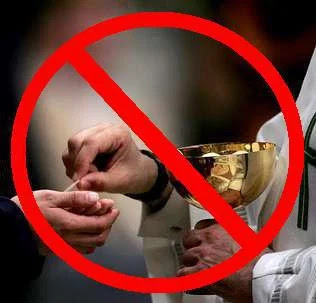 I have never seen so many raw nerves in the Catholic Church and directed toward our pope, bishops and priests. I think lay Catholics are at a breaking point with all of the scandals, controversies and idiocy that we see in high places, McCarrick just one ugly, scandalous scenario of way too many.

I have counseled several parishioners who are fed up with the hierarchy and truly angry at Cardinal Gregory's graciousness toward the President-elect in offering him Holy Communion. They simply don't understand the politics of cardinals and bishops.

President Elect Joe Biden is the most virulent pro-abortion President who happens to be the second Catholic elected to the presidency.

Is it too difficult for the bishops and the Cardinal of Washington, DC simply tell President Biden, we want to work with you and we are glad you attend Mass. However, given your stance on abortion, gender ideology and euthanasia, please refrain from receiving Holy Communion. Is that too difficult?

As it is we have Cardinal Gregory saying he won't refuse the president-elect Holy Communion as he doesn't want to weaponize the Holy Eucharist. But when a person receives Holy Communion in a state of mortal sin or public apostasy,  that will not go well for their salvation and is another mortal sin. Does the Cardinal not care about the immortal soul of the president-elect?????

But worse for Catholics of good will is that you have Cardinal Gregory saying one thing, Cardinals Burke and Mueler, Archbishop Chaput and Bishops Aquilla and Strickland among others saying the president-elect should not receive Holy Communion. And the Bishop of Charleston backed one of his South Carolina priests last year who refused the then former Vice President Biden Holy Communion.

Can't there be a canon law for everyone and each bishop follow it? Is that too much to ask?

Yes, Father McDonald, I and many other Catholics agree with you. On these important matters there is such divergence. The Catholic Church, because of this and the sexual scandals has lost all moral authority. All sorts of people tell me that their children pay no attention to the church because it is so scandal ridden.
Another example, away from these moral issues is the recent holy day of obligation, the Immaculate Conception. A priest was saying that at three masses for the holy day, there were about 40-50 people at each one. I said to him, "well father, most people think you don't have to go any more on a holy day." This is another mess created by the bishops.
Who can tell the bishops that they are not doing the church any favors by diluting the Faith and confusing the faithful.

In one way I envy your wonderful parishioners who are becoming aware of the enormous scandal of what many bishops in this country (and really in the whole Church around the world) practice and essentially "teach." Lucky them in that they were able to go all this time believing heterodox and even apostate clerics were rare and few. But coming from Chicago, I had this kind of scandalous rude awakening way back in the 1980's with the behavior of Cardinal Joseph Bernardin as our bishop and many, many clerics and religious in Chicago. My initial first reaction was like theirs, outraged disbelief, and certain knowledge this could not possibly stand.

Ha ha. And as my eyes have been opened through all the sex scandals, heterodox teachings, abuses of liturgy and sacraments, opinions of priests and religious that are essentially denials of Catholic doctrine and even at times mocking of it, which is rampant in Chicago, what Cardinal Gregory (who was formed in Chicago, by the way) has done is absolutely no surprise to me.

Becoming "woke," (as the popular culture terms such experiences of suddenly seeing the truth) is indeed shocking and forces a choice. Some people fall away at this point because they believed more in the organization and the social structure of the Church than they did the doctrine, and in the realization of the betrayal just walk away, rejecting the Church. But others realize their Faith was given to them by Christ and is their own great gift from God, and they will not let anyone snatch it from them, regardless of that person's office in the Church.

I hope, Fr. McD, you can help them see, no, they are not wrong in their outrage, and yes, our Church has enemies now on the inside at every level in the hierarchy, up to and including the highest and most powerful offices, who do not uphold the faith of our Fathers; but the right reaction to that fact is not to leave the Church, but to double down, so to speak, and commit themselves to knowing and conforming to the doctrines of the Church, and to listening only to clerics who preach and hold them. The lazy practice of just taking our Faith for granted and trusting that all clerics in the Church are protecting, defending, and preserving it are long gone. The choice to believe and hold and defend the Faith now is their own responsibility. Now they must know for themselves with certainty what the Church teaches, and conform to that with their whole heart and soul, rejecting those who are wolves in sheep's clothing, and holding fast to the Truth in their own hearts.


I'll say a prayer for your innocent parishioners, Father. I'll pray they ultimately ask, like Peter, "But where shall we go? You have the words of eternal life."

Corrupt bishops and priests have brought us to where we are today. May God have mercy on their souls

I suppose incredulity CCC 2089 just doesn't cut it across the clergy any better than some Canon Law would. I have to fall back on the historical reflex of the Church to only clarify a problem as a problem when it's way too late.

So what about a Catholic politician who might vote to allow abortion in "limited instances', like life of the mother? Anathema too?

And who are the "innocent" ? parishioners? How do we distinguish them from the "guilty" ones?

Maybe the saving grace is that with heavy presidential security, Biden won't show up to church that often anyway---though I guess he could always invite a priest to the White House to celebrate Mass.

Certainly prayers are in order that Biden can at least be persuaded to change his mind on the Hyde Amendment, which has saved many lives. Certainly even some pro-choice voters can oppose funding of abortions, whether because many object to abortion or even for secular reasons, namely, the US Constitution does not provide any authorization for abortion funding---not listed under enumerated powers. OF course, if you believe the Constitution is a "living. breathing document" that "evolves" with the times....

Bee,
I thought almost everything you wrote was great.

However, I don’t think you fully realise what is now meant, by many people, by being “woke”.
To be Woke means being aware of, even obsessed with, all the racism, sexism and homophobia and transphobia that still exists in functioning Western democracies.
To be Woke often involves seeing that that the only real objective reality is that there there are some groups who have power and privilege and others that don’t and there are oppressor groups and oppressed groups and that all else is basically a social, cultural and or linguistic construct.
The Woke usually believe that appearances are deceptive and that nations like the USA and the UK etc are still best described as really terribly oppressive, racist, homophobic, patriarchal tyrannies (regardless of the reality that by world standards and historical standards this is ridiculous).

The old notions of what a good was - ie honest, hard working, compassionate, loyal, unselfish, generous and forgiving and so on....are with Wokeness replaced with new notions of what a truly good person is - ie a person who is anti racist, pro feminism, pro LGBTLMNOP, pro trans and also passionate about fighting climate change.

Thus, a Catholic bishop with a degree of Wokeness will also often focus on such issues as racism, sexism and global warming etc.

Thank you for your comment. I guess I stole the concept of what the term seems to convey, that is, suddenly seeing the dynamic behind puzzling, incongruous behavior.


But I do understand "woke" has that specific meaning in the Land of the Left you so artfully describe, where everything they think is true is true because they think it is true, never seeing the dynamic they find so offensive is pretty much evident in every society of every culture and race, and so it's safe to conclude such things are probably human nature and can only be mitigated, not eradicated. What I think is most hilarious about the Left is when they do get a little power they pull the very behaviors they condemn so loudly; solidifying power with intimidation and unjust and harsh decisions (cancel culture is similar in intent to the KKK running someone out of town, or even a lynching), demonizing anyone who disagrees with them, calling for their destruction (somewhat like racial stereotyping), and acting without respect for the laws and fairness. It is very similar to the behaviors exhibited by the KKK toward blacks.

Leftists make very poor leaders. Who would want to live in a country where they are in power is beyond me.

It is my understanding that there are already provisions in canon law as to who may receive communion. If by their public actions, a Catholic would be in violation and the Eucharistic minister is aware, the the prohibition speaks for itself and the minister would be guilty of complicity in violation of canon law. While the communicant should certainly approach in awareness of worthiness to receive, the minister also has serious obligations.