I just came across these photos of Sacred Heart Catholic Church in Augusta, well before Vatican II and when the Jesuits staffed it. I have never seen these before as there are few to be found on the internet of its interior when it was a Catholic Church. It is a May procession with kids from Sacred Heart Elementary School next to the church. It gives you an idea of how it looked as a Catholic Church. I remember going there for Mass in the 1960's and it was exactly like this with the pulpit where it is in these photos. After Vatican II, no changes were made except for a free standing "ironing board" wooden altar in front of the magnificent main altar.  It makes you scratch your head: 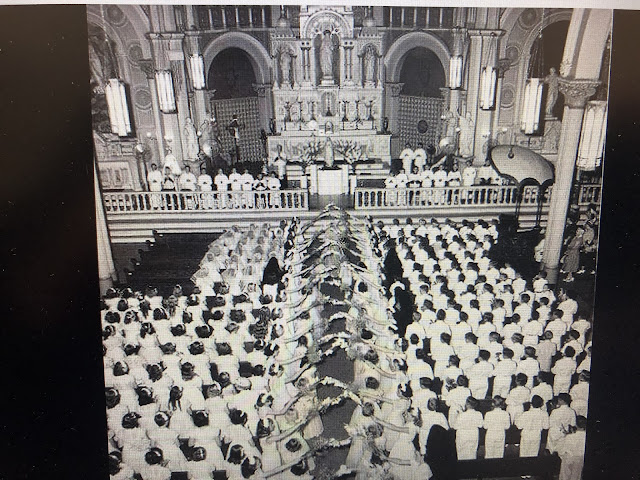 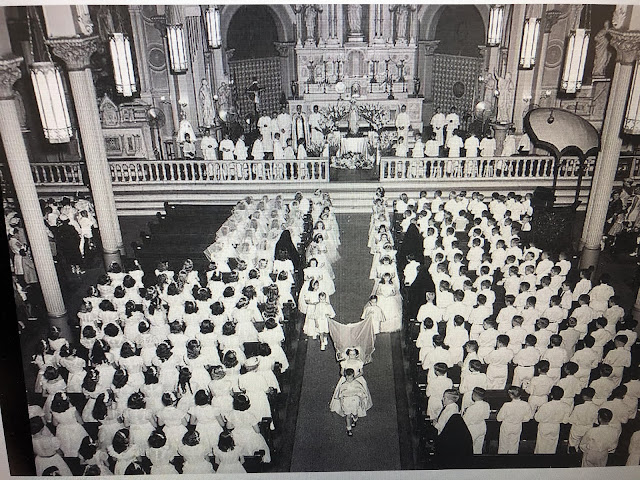 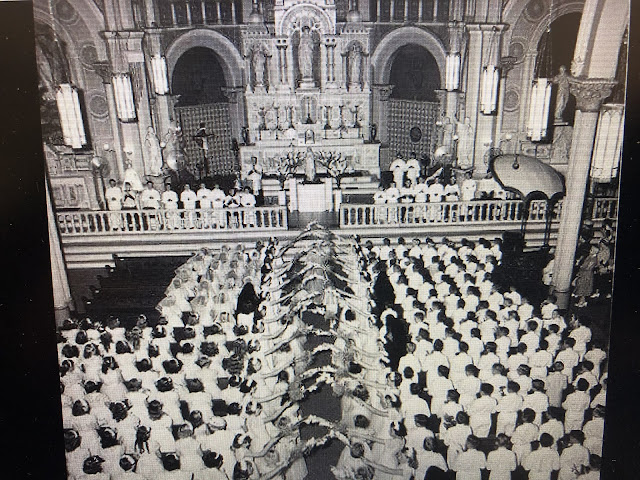 After (as a cultural center):

The Knox family restored Sacred Heart. Having been vacant for more than 15 years, both the interior and exterior were in terrible condition and looked as though it needed to be torn down. They respected all aspects of this building. They took out the altar railing which has been vandalized by homeless people who made the interior their home (as well as the huge rectory attached to the back of the church). Most Holy Trinity six blocks away received the pews and the Last Supper scene in the facade of the high altar as well as a few of the nicer statues.  You can't see it in these two photos, but the pulpit with the shell is still there and can be rolled out for use! It is hard to see in the first photo below but the pulpit is by the far right side of the right side, side altar. 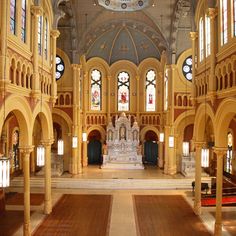 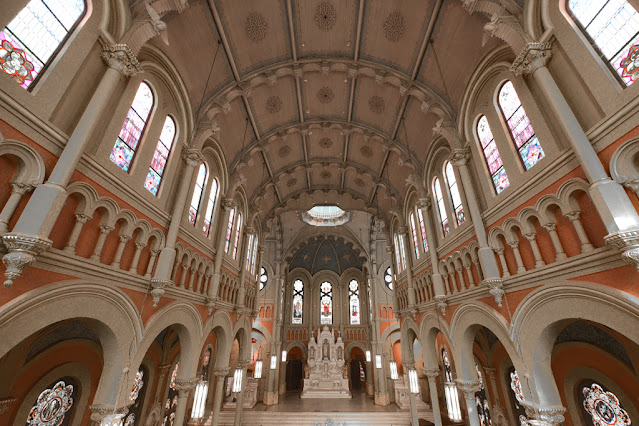 This church and Macon's St. Joseph Church were designed by the same Jesuit brother. He also did Sacred Heart in Tampa and another Sacred Heart in Texas which was destroyed by a hurricane in the 1920's. The Texas one was an exact duplicate of Augusta's. It is clear that St. Joseph in Macon and Sacred Heart in Augusta are related but there are many variations and Macon's is newer and used better quality materials in the interior and it has flying buttresses on the outside which Sacred Heart does not. Brick patterns are unique on both.
However the altar railing for Sacred Heart looks like the very same type as St. Joseph's which I restored.

The pre-Vatican II photos offer solid evidence of a once, great universal Church, utterly destroyed by the "progressives."

Beautiful church and I suppose it is a good thing that someone found a way to preserve as a cultural venue. Interesting that the high and side altars remain in deconsecrated form (I hope). In the Northeast, they likely would have been removed along with the windows and other sacred objects being sent to a liturgical exchange hopefully to be repurposed elsewhere.

How does the size of the church compare to Saint Joseph's? They look the same.

I think Sacred Heart is slightly longer thus seating slightly more people. St. Joseph on the outside also seem to be truncated that way compared to Sacred Heart although St. Joseph has taller steeples and on the side of a hill is more imposing. Sacred Heart is on flat land. The Stations of the Cross are similar except Sacred Heart’s are plaster and St. Joseph marble.

I have heard that the reason Sacred Heart was closed---and Holy Trinity (St. Patricks) was allowed to stay open---was that the costs of repairing the formal were too high. Less expensive to run Holy Trinity. I guess too many Catholics had moved to "the Hill" and become members of St. Marys up there. Thanks to the Knox family for preserving Sacred Heart, though I wish the Calhoun Expressway did not end practically right in front of Sacred Heart!