The Church of the Most Holy Trinity in downtown Augusta is an integrated parish resulting from the closing of a white parish and an all black parish back in 1970. I was pastor there from 1991 to 2004.

The African American population, augmented by native Africans, Nigeria in particular, were very engaged in the parish and worked hard to make sure integration worked well there. By 1993, we started a Gospel choir at our 12:30 PM Sunday Mass that grew and became well known in the black community in downtown Augusta. They were invited to sing at one of the largest black churches there.

One of the things I wanted to do was to incorporate some inculturated art work depicting the African heritage that would blend well with the traditional Neo-Romanesque architecture of the church which was consecrated in 1863.  At that time, we could not find anything we felt would be suitable.

But in recent years, there as been a great deal created that would be perfect in that building. This image of Madonna and Child is a classic example and would fit well not only in a Latin Rite parish, but in Eastern Churches too: 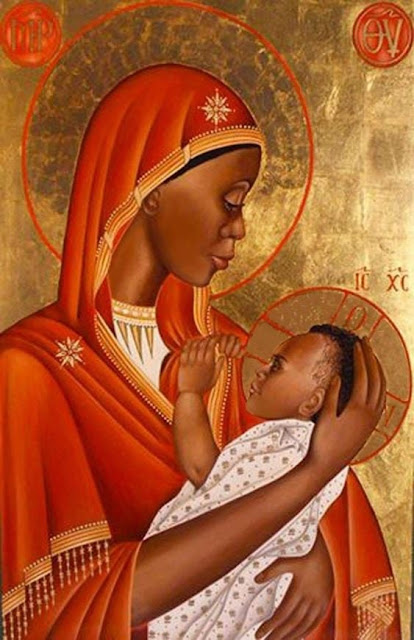 An interesting image upon which to reflect. Similarly, I believe the Vietnamese venerate an image of the Madonna and Child reflective of that region's race and ethnicity.

We know Mary was a Galilean Jew. As such, she would probably have looked Middle Eastern with an olive complexion and facial features native to that region. Her sub-Saharan appearance within this piece likely makes her more relatable to those having that background.

Interestingly, many of the Eastern Catholic and Orthodox churches that were constructed in the U.S. during the early years of the 20th century featured iconography in the so-called "western holy card" style. Such images typically appear to be 3 dimensional with pastel backgrounds. Those depicted mostly have European features. My point? Throughout history, neither the holy family nor the saints have been depicted as they likely would have looked.