I HATE TO BE ACCUSATORY, BUT EITHER THIS BISHOP IS AN APOSTATE OR HE IS A LIAR AND IF A LIAR AND NOT AN APOSTATE, IS HE SHISMATIC?

A wolf in a shepherd’s liturgical vestments: 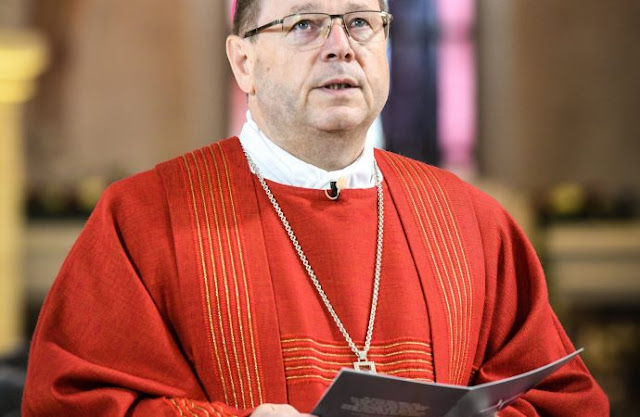 This German bishop is a liar in the sense he calls himself a “conservative” but espouses the liberal, gnostic policies of Protestantism. He is actually a neo-Protestant and may well lead the Church in Germany into another reformation. Recall that the first reformation did so much for the unity of the Church.

Maybe though, if Germany has yet again a Protestant Reformation, maybe the True Church will have another Counter Reformation with the world’s bishops meeting in Trent (Torrino) for Trent II! And maybe Trent II will make Trent I look like child’s play.

Read the headline and then press it for the article and scratch your head and then ask the bishop, “how stupid do you think orthodox Catholics are?” He’s a Gnostic.

Just a few of the things he is advocating: blessing of same sex unions and sexual unions of a variety of kinds, thus removing any sense of original or actual sin connected with any type of sexuality.

He asks for the ordination of women deacons and priests.

That’s only the half of it. And he criticizes the progressive stances of the Vatican under Pope Francis; interesting, no?

But let me ask this question, given the gay lobby in society and the Church, is there a way to make sinful homosexuals feel welcomed attending Mass? We make sinful heterosexuals welcomed. Of course within orthodox Catholicism, if a person is in a state of mortal sin, they should not receive Holy Communion until they have repented and received Sacramental Absolution. Some heterosexuals who live in sin or are a civil marriage not recognized by the Church because of a previous Sacramental marriage, are banned from receiving Holy Communion and some ministries. Heterosexual couples living in sin are not banned from attending Mass but are banned from receiving Holy Communion.

If you had a gay son in a civil marriage how would you treat him and how should the Church minister to him. Is the Gnostic bishop in Germany the way to go?

I guess he has not read Ordinatio Sacerdotalis

I was shocked when I heard a priest say he hoped the Church would allow marriage for priests some day. I understand the physical desire but I also believe it is amplified by the society. There is almost no support for any sort of self control and I suspect it wears on the clergy of all ranks. This poor man probably gets no support but only philosophical blather equivocating any manner of sexual activity. He is stranded in a seq of iniquity.

The Church allows marriage for priests and has done so since St. Peter's mother-in-law.

You are misinformed, the Church in the East (both in union and Orthodox) allow married men to become priests, but not priests to marry. That is an important distinction. And married priests are not allowed to become bishops.

I have worked with four married priests over the years, one who was my Parochial Vicar in Augusta for the 13 years I was there and currently with an army chaplain of the Ordinariate who assists here at times and also has the Ordinariate Mass in our chapel.

I guess after these statements he he guaranteed to be made a Cardinal by Francis in the next consistory.

The Church allows marriage for priests and has done so since St. Peter's mother-in-law.

This is not misinformation.

Marriage for priests is allowed in the Eastern Catholic and Orthodox Churches. The Latin Rite bishops bullied the Eastern Rite bishops in this country for decades, refusing to allow married priests to serve in Eastern congregations. They finally had their miters handed to them by a brave and righteous Eastern Bishop who ordained a married man diespite the Latin bishops' opposition.

In 2014 Pope Francis lifted the decades long ban on ordaining married priests for the Eastern Catholic churches outside their traditional homelands where married priests are common.

Split all the hairs you want - married priests have been in the Church since Peter.

I was shocked when I heard a priest say he hoped the Church would allow marriage for priests some day. I understand the physical desire but I also believe it is amplified by the society. There is almost no support for any sort of self control and I suspect it wears on the clergy of all ranks. This poor man probably gets no support but only philosophical blather equivocating any manner of sexual activity. He is stranded in a sea of iniquity.

10:16, you must not like being corrected when you are wrong. "The Church allows marriage for priests." Priests neither in the east or the west are allowed to get married unless they are laicized.

In the east, married lay men can be ordained priests, but they must be married as laymen. That's a HUGEEEE distinction which you failed to make and it isn't splitting hairs whatsoever.

You reiterate in your falsehood in your second post: Marriage for priests is allowed in the Eastern Catholic and Orthodox Churches.

Nooooo, marriage for priests isn't allowed but married men may become priests but not bishops.

The Latin Rite also ordains married men, normally those coming from Protestant traditions who are ordained in their tradition.

I have been told, though, that the Ordinariate out of Houston may not ordained married men to the priesthood, although initially it was thought they could be. I had my Ordinariate married priest tell me that just recently. Like I, he though married men could be ordained but that was clarified by his Bishop, Bishop Lopes of the Ordinariate.

I should have written, though, that married Anglican/Episcopal priests with no impediments may be reordained as Catholic priests in the Ordinariate. Technically, since their Anglican Orders are completely null and void, they are laymen in the eyes of the true Church.

The first Reformation resulted in circa 6-12 million dead over the following century.

It is rather hard to "minister to" sinners of whatever stripe when they do not love God and thereby wish to keep his commandments out of love.

And neither do the sinner's parents, friends, or fellow parishoners appear to love God and his commandments above all else.

And odds are neither does their priest or bishop seem to have that priority in their lives.

ALL they are taught is empty rules, taught by empty people, and they know pharisees/phonies when they see them.

And they will unsuprisingly tune them out as irrelevant, and do, to an ever growing majority, when the majority of those who would "evangelize" do not follow even the 1st commandment.

This bishop should be sacked. Maybe he could find work as a coder or a barista

Or the bishop could find work in the Anglican Communion---well, maybe not in Africa where Anglicans, like Catholics, are more conservative than their brethren in the Northern Hemisphere.

Satan is determined to lure Germany's Catholics from Pope Francis.

In particular, we need to pray that Germany's bishops do not succumb to Satan's temptations to disregard Pope Francis' Magisterium.

The thing is, Batzing isn't even an outlier in the episcopate there. This is what official German "Catholicism" is these days. The diocesan priesthood and religious orders are either with the program or too cowed to speak against it.

And the noisiest, most radical part of the dwindling German laity have been indulged because they are the ideal stalking horse for the agenda: "hey, we're just listening to the people here!"

Francis, like his two immediate predecessors, will do nothing substantive to rein them in. Money talks, and the kirchensteuer gives the German bishops quite the slush fund.

I am actually grateful to the Germans for their honesty--this is the agendy many other bishops and laity secretly want, but officially dissemble about. Time to bring this to a head and force some candor.

PF could replace or publicly correct this apostate, but he has not. Birds of a Feather

DP, some excellent comments, thank you.

RE: The married priest commentaries. One would think with the various reports of various sexual abuse incidents by unmarried clerics that the desire for a sort of regularized and common policy could be established for a married clergy. The different policies by diocese i.e. Houston cited, and historical variance should have shown us the desirability of such an approach. As far as some of the German bishops, marriage questions are the least of their problems. The neo-reformation attitude that many have has and is continuing to undermine the Church. Obviously PF has little interest in any sort of public confrontation but the next conclave might keep this and some other important issues at the fore of their consideration of the next Pontiff.

Anonymous said..."MT, PF could replace or publicly correct this apostate..."

The Church determined that he is an apostate? Or have you rendered that decision via a canonical trial (or by other means) that you conducted?

"Some heterosexuals who live in sin or are a civil marriage not recognized by the Church because of a previous Sacramental marriage, are banned from receiving Holy Communion ...": No longer applicable in view of the notorious footnote 231 in Amoris Laetitia, which (with the rest of that Apostolic Exhortation) was added to Acta Apostolicae Sedis along with the Pope's leter written in reply to guidelines published by the bishops in the Buenos Aires, Argentina, region, saying that the bishops' guidelines "explains precisely the meaning of Chapter VIII of Amoris Laetitia. There are no other interpretations. ... authentic Magisterium."