THIS YEAR’S VATICAN’S “NATIVITY” WAS CREATED BY REBELLIOUS CHILDREN BETWEEN 1965 AND 1975, THE TEN YEARS THAT THE CURRENT AGING POLITBURO OF CATHOLIC LEADERS LOVED AND ARE TRYING TO RECAPTURE

Ugliness symbolizing the Church of 1965-1975, one of the worst periods of Church history : 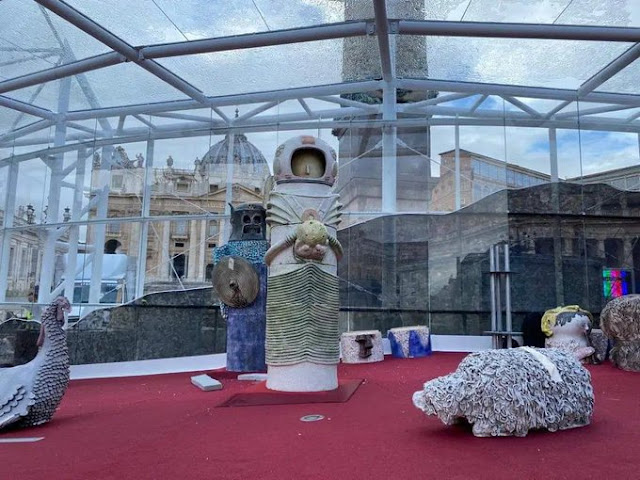 John Allen of Crux has an interesting article on the absurd nativity scene in St. Peter’s Square. Here is a brief excerpt:

The presepe currently standing in St. Peter’s Square features rather abstract pillar-shaped figures crafted by a high school class in the Abruzzo region of Italy sometime between 1965 and 1975 (oddly, no one seems to remember precisely when). Terms such as “hideous” and “absurd” have figured prominently in online reaction.

Here are a couple of the kinder reactions on the Vatican’s Facebook page.

“It makes me cry, but it’s consistent with the ridiculous nonsense creeping in more or less everywhere … infinite sadness.”

“Horrible … why ceramic products, which can’t help but represent modern ugliness? … Where’s the sense of the beautiful, of good taste, of harmony of forms!?! A nativity set should make you dream, should immerse you in contemplation of the Mystery!”

And, naturally, in the 21st century, reactions to Vatican nativity sets also have become politicized. Here’s another disgruntled commentator:

“This ugliness perfectly incarnates the decadence of a certain kind of Catholicism in words and deeds.”

My comments:  Ever since 3/3/13, my visceral reaction to the climax of the day’s event was one of dread, a feeling of a return to the ugliness of the 1965-1975 period of ugly iconoclasm of the Catholic Faith.

I think we can think “art” in terms of this iconoclasm, especially what was done to beautiful churches and cathedrals in drastic reckovations, many documented here. Just as Pope Benedict began a restoration of the beauty of the papacy and Catholicism, so too did parishes and cathedrals begin a movement of the “after, after” renovation of their reckovated churches, restoring beauty and tradition.

From the vesture of Pope Francis to the current nativity in St. Peter’s Square, we see the last rally of that aging group opposed to the other aging group symbolized by Pope Benedict, of restoring ugliness to the Church, blahness and “singing a new “church” into being, one where the periphery of doctrine is made central and what is central is sent to the periphery and the faithful are pushed aside to the periphery and replaced with those who could care less for the Church of the Ages made central.

But this battle between the two schools of Vatican II thoughts symbolized by Bergolio and Ratzinger is just the last hurrah of the one that will lose, Bergolio’s school. But we have to wait it out. I find it fascinating that the protagonists of the two schools, only 10 years apart in age are still living and coexisting as the two theologies of the Church are doing in the present. It has to be Divine Providence along with modern medical care. What a fascinating historical time for the Church we are experiencing, almost apocalyptic.

The last critique from John Allen’s commentary sums it up: “This ugliness perfectly incarnates the decadence of a certain kind of Catholicism in words and deeds.”

I was heartened by John Allen’s commentary as Italians are outraged by the outrage in St. Peter’s Square. John Allen points out that Italy is where the “Nativity” scenes originated and each region of Italy has its own spectacular recreations of it.

Naples is the place today which has the most elaborate recreations. Those from Naples have had the strongest negative reaction to the Vatican’s outdoor scene this year. I am from Naples and that explains my reaction.

Given the current clown show of obfuscators running PR/spin at the Vatican such as Spadaro et Cie, I should be suprised if this not blow up into a big scandal because it turn out that the vague description of Mangler Scene origin be utterly fabricated/false/a lie, and their public statement regarding same in reaction to the near universal condemnation of the "art", and them have paid off the modern artist with hush money who already made a pile off the sale, and likewise made a healthy donation to the school to claim the junk. Anything is possible with this crew, the stupider, the more likely.

It looks like the cheap aliens from Doctor Who. Old school Doctor Who, from back in the 1960s.

This is NOT holy.

"Are we being trolled by the Vatican?" - Taylor Marshall.

Who ever signed off on this hates all that is Christian and can't hide it.

Aside from the vague sourcing giving pause to believing the story at all, it could have an entirely logical explanation.

Such as it really came from the school, and was so highly esteemed that they recorded not a single detail regarding it or who exactly made it, and was essentially junk in the back of warehouse, and maybe even got REALLY cheap or perhaps a huge tax write-off on vastly inflated donation value.

WHATever the motivation, it likely as ugly as the "art" foisted upon the faithful.

For some people, one aspect of Postmodern ideology might apply here (and with some other recent posts here and the following comments)...
ie: there are no standards of judgement that transcend individual perspectives; such objective standards simply don’t exist.