Yes, Virginia, there is not only a Santa Claus, but these two photos are two examples of the two forms of the Latin Rite Mass, the Extraordinary Form and the Ordinary Form. Can you tell the difference? 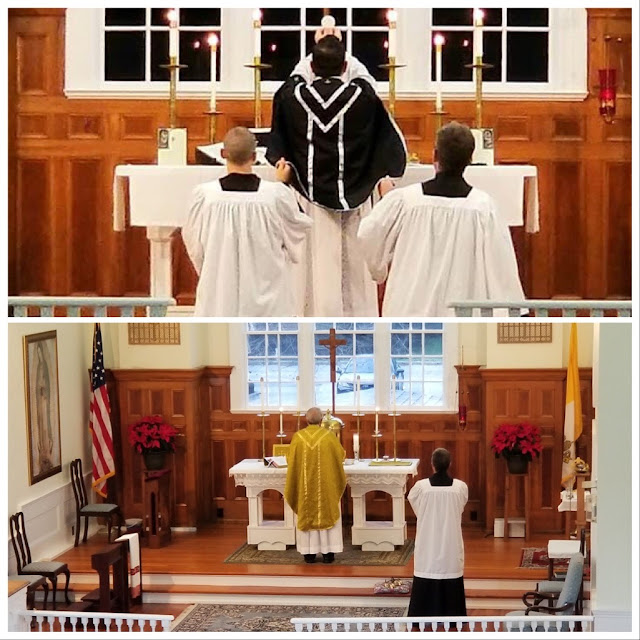 In terms of the two forms of the one Roman Rite, although, there are other rites, like the Ordinariate's Rite, and Pope Francis stated on Monday that The Zairean Rite is a “promising model” for the Amazon.

And of course there are other rites in the Latin Rite, such as the Ambrosian and Dominican Rites.

Because of its rigidity in terms of language and rubrics, I doubt the Extraordinary Form of the Mass could be inculturated, although a vernacular hymn could accompany the procession at the beginning of Mass prior to the chanting of the Introit and the same with the recessional. I think too in addition to the Offertory and Communion antiphons, an inculturated anthem could be sung in whatever acceptable idiom, be it Gospel or otherwise. But that would be about it unless others have suggestions.

Also, some SSPX parishes in France and even our Cathedral Basilica in Savannah allow a layman to read the Epistle and Gospel after the priest introduces them with the Latin salutation and first few words of the readings and then goes silent as he reads the Latin Text while simultaneously the layman reads both the Epistle and Gospel in the vernacular from the ambo. It doesn't take a leap to allow these to been done in the vernacular instead of Latin and at the ambo by a lay reader for the Epistle and the priest or deacon for the Gospel.

But the Ordinary Form can be so easily molded to inculturation as well as parish adaptations, that almost anything could go.

But that's not the point of my post. This is it:

But what about these customs associated with the EF Mass?

1. Remove the chasuble prior to preaching the homily and begin and end the homily with the Sign of the Cross. Currently as our Cathedral Basilica's EF Mass, the celebrant only removes the maniple placing it on the Missal prior to proceeding the to the ambo to preach the homily.

2. What about the use of the biretta? Could it be used for the procession, sitting for the readings, for the homily and at the recessional?

3. We know that ad orientem and kneeling at the altar railing is allowed but heavily depends on the position of the local bishop if he will allow it or not.

4. Could the EF's Asperges or Vidi Acquam be used as a prelude to the OF Mass?

5. Could the priest during the Eucharistic Prayer, any of them, and during the consecration bow slightly when he says, "and He gave you thanks..." and could there be double genuflections as in the Ordinaritate's Missal?

6. What else do you think is plausible with the hyper adaptability of the Ordinary Form, that bishops might allow?

As for use of various articles of clothing at certain times, often lost in the arguments among various sides/quarters is the fact that the vestments have ancient origins predating even Christianity in some cases. Others are from the earlier years and reflect, in the older Roman rite (which is far away from even the only Catholic rite) the ideas and dress of properly formally attired (wealthier) Romans of the times. And then other articles have accrued later (such as the biretta) and/or morphed from articles of earlier times as to be unrecognizable to the original wearers.

Not sure why Novus Ordo people want to change the EF. Liberals do what you want with the OF as you are want to do. Leave the Traditional Latin Mass alone.

UK priest, is your answer simply a Gnostic knee-jerk reaction or do you have anything to back up your theology of "no's" in the area of theology, liturgical doctrine or law?

One of my former bishops use to say that we should be a people of yes not of no. For example we are pro-life not anti-abortion. Get the drift?

I have seen the biretta being worn by priests and deacons in procession and when seated in the Novus Ordo. Back in the early 1990's, I attended Mass at St. Aloysius Catholic Church in Oxford, UK while in a summer study program there. The Oratorian priests (and deacons) always wore their birettas at Mass and the priests also wore Roman chasubles. Also, I attended Mass once in Myrtle Beach, S.C. and the priest there wore his biretta with modern vestments in procession and when seated. I am not sure why liturgical use of the clerical biretta fell away after the liturgical changes (other than the general cultural change resulting in a decline in the wearing of hats by men at the time). While the biretta might be a requirement (or at least a popular tradition) in the EF, I am not aware of any prohibition of its continued use in the OF (unless a bishop prohibits it, as with ad orientem or Communion at the rail).

Joseph, apart from not wearing hats anymore to church or elsewhere, I think by the late 1960's early 70's the long-haired, hippie type priest would look horrible in a biretta and it would mess up his poofy hair. I still have that problem today when I wear my biretta for the EF!

Here’s a novel idea, Father. Abolish the Protestantized Mass and return to THE HOLY SACRIFICE OF THE MASS, as God intended and surely more readily accepts.

Regarding the NO
1. Remove maniple placing on Missal prior to homily. I've seen this done.
2. I've seen this done many times
3. I've seen this done several times
4. I don't see why not as mass hasn't yet begun. Would be para-liturgical.
5. I've seen this done
6. I still maintain that ad orientem would be the single greatest game changer perhaps followed by kneeling at the altar rail though such a practice no longer exists in the Byzantine Ruthenian Church (it was a Latinization) so, I do not have any strong passions about it. We stand acknowledging the Resurrection - actually, we stand for more of Divine Liturgy than we sit.

I recall a former Episcopal parish in Columbia that formally joined the Catholic Church after the former began ordaining women priests had a certain Anglican-style Mass (not sure if still in effect today as I have not lived there in a while). The chasuble was hung over the altar rail for the liturgy of the Word, and then the priest put it on for the liturgy of the Eucharist. And you knelt for communion. I am not sure why the vesting was "half and half"---a guess might be to signify the two main parts of the liturgy. In some cases in the Episcopal Church, the priest might wear a cope for the first part of Mass and then the chasuble for the second half. Talking "small T" tradition here of course---like debates on how many candles to have at the altar---or whether they should even be on the altar, or to the sides of the altar?