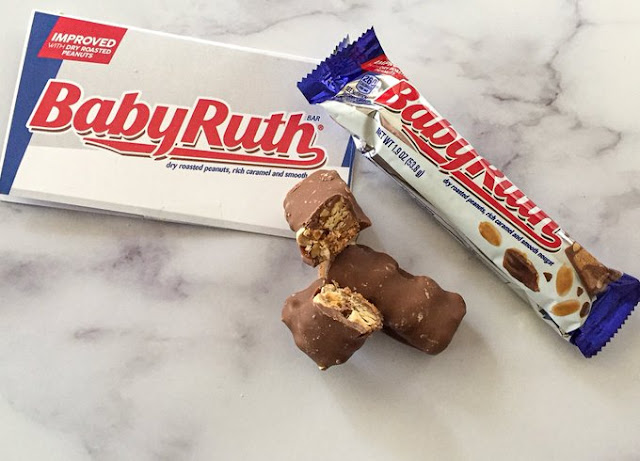 I BEG TO DIFFER AND I PROTEST! This week, much to my dismay, I ate a snack sized Baby Ruth bar that someone in our office purchased for the staff to snack on.


I've been eating these things since I was a child, a huge bar costing only 5 cents in the early 60's! As I was eating it, I thought to myself, self, this isn't my day's Baby Ruth, its too sweet and the nougat is different, its like fake news, its a fake Baby Ruth!!!! Maybe it came from China or Covid 19 infected it?

I even complained to one of my coworkers that the Baby Ruth didn't taste right. Unfortunately she's generation Z or something like that and didn't know what a Baby Ruth was, nor could she remind me of the name of its sister star, which I figured out on my own, the Butterfinger candy bar, my other most favorite, but second only to Baby Ruth candy bar.

Well, I googled Baby Ruth to see if its recipe had changed. And sure enough, I found this pro-change article I post below! Nestle, which is a Swiss Company, sold out its candy division to an Italian company, Ferraro. I knew they had changed the recipe for the Butterfinger, which isn't bad, but not as good as it use to be. But the Baby Ruth I have no desire to eat again. The change has ruined it for me!

You can read the pro change article here, propaganda if I ever read it!

The only thing I can suggest is that “you get over it”!

Did you get an export version? Confectioners often make different versions of the same thing for different market countries. Coca-Cola is an example. The New Coke reminded me of coke I experienced in other countries.

Quite a few south of the border Coca-Colas are more as old Coca-Cola and made with sugar instead of corn syrup as the current/post-NEW Coke in the USA.

As for changes in the candies, such classics such as Boston Baked Beans, Red Hots, cinnamon discs, etc seem sourced from Mexico.

Changes are mostly driven by sourcing/shipping durability/shelf life, where makers have discovered butyl rubber makes excellent candy if you add enough artificial flavors, and hey, this is for human consumption and lab rats growing fingernails out of noses is a rat thing having nothing to do with humans.

Plus, folk can now put their favorite candies in Centennial and Bicentennial time capsules, and those people of the future will be able to taste and see exactly what favorite treats we enjoyed, AND be able to use it as a night light.

Kit Kat Kavanaugh, man, you just have to snark. Give it a rest

There he goes again, as beloved President Reagan said. Seeing Kavanaughs under every bed when the humor or point is beyond him.

Why do you approve these vacuous and utterly offbase paranoid misidentifications, Father?

It really detracts from your comment section unless you prefer such posts to dominate the place by driving off others. The changes in candy are driven by economics (such as shelf life and shipping durability) as mach as taste tests, today, which was the point of my entire post, and only reply, AGAIN, is to be accused of being Kavanaugh, and that reply was approved by you. Apparently any attempt at humor here is automatically judged "snark", and by Kavanaugh, no less, which means he must be the only one who posts here who has a sense of humor?

In Britain the price of a Mars Bar is sometimes used as an index of inflation. In the mid-1960s it cost sixpence in old money; today it is the equivalent of twelve shillings, which would indicate an inflation rate of X24.

However, the size has decreased over the last fifty years. In this century alone it has gone from 60.5g to 51g.

What's the difference between a Baby Ruth and a Snickers?

Yes, John, the same here in terms of cost rising and the bar shrinking. The single bar I spent only 5 cents for in the early 60’s was humongous and in fact, you can’t get a bar that size anymore, no matter how much it would cost. Even at Halloween, people would pass out this huge bars to kids as we went door to door. Today, people by bags of micro bars to pass out. What a cheat!

I am not sure how English money compares to American change.

Believe it or not, M & M Mars does not sell Mars bars anymore in the USA—absolutely stunning. Thus I can’t really remember the difference between a mars bar and a snickers. Perhaps not too much and that’s why it was eliminated from our market?

In terms of the snickers bar and Baby Ruth, prior to the change in Baby Ruth, it would have had a totally different texture and taste. The new recipe though, and oddly enough since you ask the question, makes it taste more like a snickers, although I think the Baby Ruth has more peanuts and is more crunchy. One of the changes is the peanuts now are dry roasted instead of oil boiled. This affects the taste and I think the nougat tastes more chocolatety to me than previous, thus sweeter. I am not a big fan of snickers and never was but i loved Baby Ruths but now it taste more like a snickers, i don’t like it. Interesting you mentioned snickers.

Now that I think about it, when we had Mars bars, the same company made Snickers and Three Musketeers. I think the Three Musketeers and Mars bars were more similar. I find it peculiar, though, that the Mars bar was eliminated from the American market, give our fascination with space and the planet Mars. Go figure.

The Mars bar is an American concept, first manufactured in Slough, England in 1932 by Forrest Mars, son of the US candy maker Frank C Mars. It consists of nougat and caramel enclosed in thick milk chocolate.

When I was a boy there was a bar called Milky Way which was smaller and without the caramel. It was advertised as 'the sweet you can eat between meals without spoiling your appetite.' It retailed at threepence.

The Mars bar had the slogan 'A Mars a day helps you work, rest and play.' In those days you could get a substantial portion of fish-and-chips for one-and-nine (1/9d) and a three course lunch at the local Chinese restaurant was five bob (5/-). That's a quarter of a pound sterling.

Decimal currency came in February 1971 and rampant inflation only a few years later. I now pay £4 for a pint of beer. Oh, the humanity!

No answer as to why constant accusations of being some hated other poster are allowed on a regular basis, Father McDonald? Not even an acknowledgement there is a problem here? Only thundering silence?

That tears it...no more of this place for me.

Good. One fewer Anonymous for honest men to have to contend with.

Did a man of the cloth really use a photograph from someone else's article and not give proper attribution?! And isn't it the same article that compelled you to post your rambling screed in the first place? Blasphemy!

Proper credit is given by the full article I link. Push and you'll see. Is this the best comment you can make on such an earth moving and shattering post?

Posting a link to the article is NOT proper attribution. You used the photograph as well. And is that the best response you have hiding from behind your pulpit? Fraud. Thief. Blasphemer.