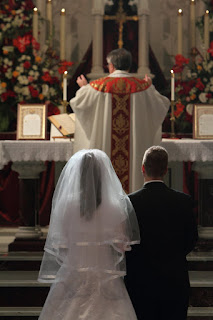 This article on Pope Benedict/Cardinal Ratzinger which you can read HERE made me reflect on my own liturgical positions so influenced by Pope Benedict and thus I write the following:

If we have learned anything in the last 50 years, we should have learned that it is best not to ditch completely the liturgical books in favor of something new as happened after Pope Paul VI's committee fabricated new liturgical books for the Church in an academic, professorial way (read clericalism!).

As everyone who reads my blog knows, I am a child of the Church, greatly influenced by Pope Benedict and his long legacy and I embrace the two forms of the one Latin Rite wholeheartedly. I love both forms and try to celebrate both as these are designed to be.

I've tried hard not to be a clericalist when it comes to the reformed liturgy, changing willy/nilly those things I personal don't like. Clericalism is at its apex when clerics bring their agenda to the laity who could care less about redundancy in revised English prayer, syntax and the rest of it. They are like the clericalist committee that redesigned the liturgy as decorators in a department store completely from the ivory tower of clericalism and academia, the two being closely linked in the Church.

Thus I would never ditch the revised Liturgy of Pope Paul VI. I would never have ditched the 1962 Missal and other liturgies associated with that period of the Church. I have advocated as Pope Benedict has, a reform of the liturgical books in continuity with the 1962 Roman Missal.

In a sense, we can say that the 1970 concocted missal is in continuity with what preceded it in many ways but falls short, very short in other ways.

Thus, I would say that the Missal itself, meaning the collects, various Masses and increase of various Masses, the prefaces and a bit of the reform of the Roman Calendar are good and should be maintained.

What is out of continuity with the 1962 Roman Missal and could be rectified tomorrow and in fact has been rectified today with the Personal Ordinariates' Divine Worship, The Missal is the following:

I have no problem whatsoever with women being Readers and serving the altar in some capacity.

Hi Father, I'm a big fan of your blog. On the off chance that you find this blog-worthy, here's a Christmas treat from your friends at St. Luke's DC: https://www.youtube.com/watch?v=lHWEK1lHXYE
All best,
J

Wasn't communion distributed in the hand in the early Church? Did they know something that we do not?

Also, the Protestant Reformers were critical of laity being denied access to the cup at communion. And the Eastern Orthodox long ago pointed out for years (centuries) the laity was denied access to communion of both kinds. The Orthodox receive with the communion spoon.

I don't think banning distribution of the precious blood would fly at my parish 95 miles up the road from Macon.

Thanks Jordan and what a great church building and choir!!!

A generous benefactor contributed to the restoration of our altar railing and many others gave significant amounts also. The laity, for the most part, love altar railings and do not see these as a barrier but actually as a sacramental (which altar railings are) which make tangible the real presence of Christ and thus bring Him closer to the congregation.

There is a reason for in the East and the West for Holy Communion transitioning from in the hand to the tongue or the use of a spoon as in the East. It was to reduce the profanation of the Sacrament as the doctrine of the Real Presence developed into the dogma of Transubstantiation. Just as the early Church was confused about the Most Holy Trinity and the two natures of Christ, they didn't remain stuck there and so the development of the dogmas concerning the Mass and Holy Communion contributed to a heightened sense of reverence.

I am not opposed in principle to the laity receiving the Precious Blood either from the chalice or by way of intinction and at every Mass. I prefer,personally, intinction as it is more hygienic and less prone to the profanation.

I am opposed to any Catholic stating that they are not receiving Jesus Christ, whole and complete under one or the other Form of Holy Communion as many Catholics now have that impression. It is heretical to say the least.

And receiving in the hand has led to an unacceptable level of hosts being profaned, either by being taken home, thrown in the trash, left in the pews or the floor or shared with others. We have found Hosts in the pages of our missalette. And I know for a fact that Hosts have been taken from Mass for Black Masses.

Anonymous said...
Wasn't communion distributed in the hand in the early Church? Did they know something that we do not?

And the first Mass was offered in the reclining position. Perhaps we should all go back to that. That way, when the sermon gets boring, we can just go supine and nod off.

The same group of people that paid to have them removed in the first place, along with high altars, statues, et cetera.

I know that in at least one diocese in Rome communion in the hand is no longer allowed because of the number of hosts that have been taken, presumably, for black Masses. I have seen in our cathedral now a woman standing between the rows of communicants up near where people receive communion and I assume that is to keep a lookout for people not consuming the host immediately. I have been at Mass on two occasions where the priest has had to chase after someone who walked off with the host in their hand. So it is becoming all too frequent.

I have never received communion on the hand but, even so, when I see people receiving communion in the hand the way some do at Mass I do find that sometimes it makes me feel blase towards receiving communion. I don't feel like that at the Extraordinary Form of the Mass because everyone is kneeling and receiving on the tongue. So I can understand why so many don't believe in the real presence any more. If you see people treating the host like a biscuit for so long it's bound to undermine belief in the real presence. Also, when making a visit to the church, I have seen lay people just helping themselves to the tabernacle - presumably to take to the sick but it doesn't help when every Tom, Dick and Harry goes there and most don't even genuflect. When I used to do the candles at a local parish I found hosts on the floor of the sacristy. Hopefully, they weren't consecrated but I consumed them just in case. You just don't hear of this type of thing happening at the Extraordinary Form of the Mass where only the priest handles the Blessed Sacrament and I believe that is the way it should be. Even in Jewish times only the priest could go into the Holy of holies and apparently he had a rope tied around his leg in case he collapsed and so he could be pulled out. All the laxness that occurs with the Blessed Sacrament these days undermines belief in the Real Presence.

Awful though it is to contemplate, in reality those who take the host for a black Mass are actually showing more belief in the Real Presence than many Catholics do ...

The way that Communion is received on the hand nowadays (in the palm of the left hand, then picked up with the fingers of the right) is not what is described by the ancient authors. The Sacrament was placed in the palm of the right hand which was supported by the left, making the shape of a cross, the fingers would be kept together and the wrists not extended, and both hands would be raised to the mouth. One can reasonably assume that the right palm would undergo some form of purification, both before and after receiving the Lord's Body.

We know the practice existed in the early Church; we do not know how widespread it was, or when it was discontinued. The nearest Mass to where I live (three-and-a-half miles) is in a small chapel and is Novus Ordo English. I occasionally attend and I am the only one who receives on the tongue and makes the recommended reverence prior to receiving. The priest-in-charge is an Oratorian who uses the Roman Canon and occasionally EP III, and who keeps thumb and forefinger conjoined from the Consecration to the Ablutions (which he performs meticulously). Even when this was made optional in 1967, the priest was still enjoined to rub his fingers together over the paten. There is an obvious anomaly here.

Thanks Jordan. I watched the video and enjoyed it.