MARTIN LUTHER WOULDN'T LIKE THIS AUGUSTINIAN CHURCH, BUT JOHN CALVIN AND JOHN KNOX WOULD, THE PURITANS MIGHT BUT THE MASONS WOULD DIE FOR IT!!

The photos below which I got from Rorate Caeli are from the Augustinian church in Würzburg, Germany. The first is how the Church looked prior to World War II. Obviously it is Baroque in architecture and decorations in this picture (or maybe Rococo, I can't remember the difference). The Second picture is how the Church looked in the 1970's after a major renovation that took out the Baroque and substituted Puritanical simplicity. The third renovation just completed and costing over 1.7 million euros which is well over $2 million, is nothing more than a Masonic meeting hall in design. It is the place where the Holy Supper is celebrated and takes its theology from the 1970's which I describe so well in my article on Albany, Georgia's renovation of St. Teresa Church in 1980.

The last picture is art work that hangs in front of and thus hides a piece of art that actually goes with the Church. Talk about vandalism of a Church and her liturgy!

Martin Luther who began the Protestant Reformation and was an Augustinian Monk would probably be turning in Purgatory if not hell realizing that the Augustinians have become Masons.

Keep in mind that this is from Germany whose Bishops own the most profit producing publishing company in all of Germany that also produces pornography! This is what the bishops finally decided to do after the story went worldwide and the pope rebuked the German bishops:

I'm not a fan of Baroque as I think it is too fussy and busy, but I respect it for its time, place and as a part of legitimate art history. The Church prior to the 1970 renovation: 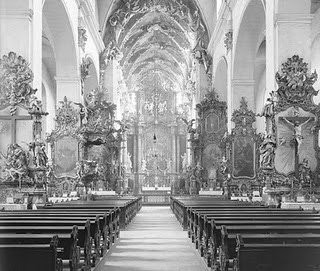 John Calvin and John Knox would be pleased. This is what the Puritans did to the Church during the 1970's revolution: 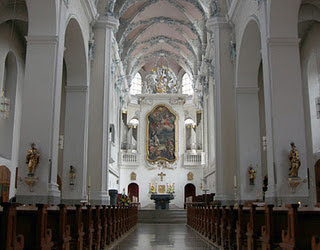 This is what the European Masons did to the Church and just recently believe it or not, although it looks like the 1970's. Yikes! 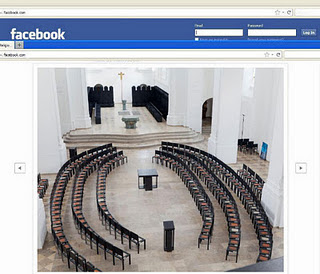 A contemporary painting ("The Heavenly Jerusalem") now covers the painting over the high altar. The latter depicts the Battle of Lepanto and is the only painting in the church that was saved from the flames of World War II. You can see the painting behind this "artwork" in the first two pictures above! 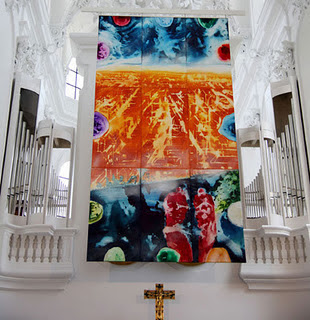 And some wonder (while it is glaringly obvious) why Europe is becoming less and less Christian!?

Externals aid in teaching and reinforcing our Faith. Externals do matter!!!

And I suppose the 1970-era table altar up in the sanctuary will now be a never-to-used-again "ornamental" relic of the past just like many pre-Vatican II high altars have become in older churches which still have them.

I'm sorry--I probably don't need to look at this post anymore! It makes me feel very angry toward those responsible for this horribly sick joke that has been played on the remnant of faithful German Catholics who desire to practice their Faith in a traditional way in traditional surroundings!

This is the kind of thing that can drive an otherwise good and obedient Catholic to become very vocal and critical of the bishop and priests responsible for such a patently counterproductive (both in financial and artistic loss as well as loss of faith)"wreckovation" of what was once a beautiful and historic church!

I don't know if this is a parish church or a monastery church, but either way, you can bet your life that an iconoclastic liturgical theologian with dictator abilities rammed this through regardless of the sentiments of others in the community that are horrified at the final outcome!

What's the matter with all you people? Can't you just tune in, turn on and drop out?

What an appalling act of spiritual and cultural vandalism.

As others more knowledgeable than myself can tell you, the continental European Masons (as opposed to the English Masons, of which most of our founding fathers were members) were (and I suppose still are)very anti-clerical and anti-Catholic. Read "The Keys of This Blood" by Malachi Martin and, specifically, about the resolution adopted by the Grand Orient Lodge in 1819 to subvert the Church within 100 years.

It almost happened in 1903 with the election the closet Mason Cardinal Rampolla to be Pope which was vetoed (under the church law in effect then) by Emperor Franz Josef of Austria. Subsequently, Giuseppe Sarto (Pius X) was elected. The Holy Spirit was surely taking care of us then!

Joe Johnson, you are correct, the European Masons are diabolically opposed to the Church. That is not the case with American Masons. In the late 70's the prohitition for Catholics to belong to the Masons was relaxed. But in the 1980's a Masonic scandal in Italy that reached the highest levels of the Vatican came to light and Pope John Paul reversed the permission for Catholics to belong to the Masons worldwide. One wonders about Germany and its liberal thinking on so many essential Church matters, remember Fr.Hans Kung, the anti-pope to Benedict is German and Germany has fueled so much disregard for the Magisterium of the Church under both John Paul II and Benedict XVI!

So, your contention is that European Masons were responsible for the renovation of this church? This is puzzling...

Oh, how silly,its their liturgical influence on theologians, just look at their meeting rooms, but this doesn't mean that these theologians are Masons, they just like Masonic architecture.

The smoke of Satan has entered the temple of God.

I have seen a few pictures of highly ornate Masonic lodges. I have seen and visited ancient Christian basilicas that are "in the round" with altar and ambo at point opposite on the circle.

In fact, many of the monastic chapels I have been in have been laid out on that pattern.

If the Baroque treasures are still in storage somewhere I pray someone will come along and restore this Church to its' historical and beautiful heritage. Whoever is responsible for this destruction should be removed from their positions. The lay faithful must be broken after such vandalism. It looks horrible.

I'm sure what you're saying is true but I'm also pretty sure this particular building wasn't built to be used in the "monastic" pattern you are describing. Rather, they are trying too hard to force this style or pattern into a building which was not really laid out to accomodate this style (look at all the wasted space with the new layout!).

Further, that horrid psychedelic or "tie-dyed" painting is just the type of modern art which I had in mind when I pointed out how "liberals" say they want language which is comprehensible to average people but they still seem to prefer art forms which are only comprehensible to those with art degrees. What good would such a painting do for the typical person?

Several years ago I went into a few magnificent Gothic churches in Vienna only to find the chairs, altar and ambo configured as you see in the photo and in addition to that the area was cordoned off even more so by a square of florescent lights around the chair area. It was absolutely hideous. However, the old sanctuary was still in tact but a relic of the past and not used.

Are they handing out LSD in this church now? Is Timothy Leary or Jerry Garcia the "priest"?

These things are an outer reflection of a cultural inner condition called "modernism," with all that implies philosophically and socially. It is disturbing that the Church and her Bishops were so easily blown around by the winds of secular humanism...just another way that Satan pulls the nose of the Church. He may be getting a bit nervous right now with Benedict XVI yanking his tail...look for another, more clever, assault.