IT'S NO WONDER WHY ACTORS DON'T LIKE WORKING WITH CHILDREN!

If you think it is easy to pull off a Solemn Sung High Mass for the Commemoration of All Souls with the choir singing Faure's Requiem, you just don't know! And then when all is said and done, a child steals the show! The Requiem was splendid and gives meaning to the saying that the EF Mass produces an abundance of sumptuous spiritual fruits born of interior participation and contemplation. It helps kindle the fire of faith, love and connectedness with our faithful departed who with us (although in a sacramental way) see the Face of God. More pictures as these become available! 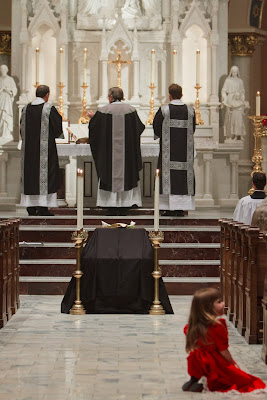 It was a beautiful Mass and this is a great picture!

Well, Father, at least she was dressed for Mass. Precious!

"Truly I say to you, who does not receive the Kingdom like a little child shall not enter it." Mk.10:15

The other thing I should note is that I would have been distracted beyond telling if I had been facing the congregation at this point. But this way, I didn't even know what mischief this child was up to during the Mass--but facing the people I see it all, disinterest, getting up to go the the bathroom, etc. With this photo what you see is cute, but is that what I should be focusing in on when I'm pray the Eucharistic prayer?
Fr. McDonald

Ah, Father, I could tell stories that would chill your spine about the things I have seen while preaching "ad populum" from a Presbyterian pulpit...LOL! The theology might also chill your spine, but that is another discussion...!

I want, as I did in a comment yesterday, to commend you on your explaining last night to the people the "contemplative" element of the Traditional Mass.

The problem is that the Mass is so beautiful, people (not our authorized cameraman) keep taking pictures during it! :-)

Yes, when ultimately we arrive at the Gates of Heaven (presumably) the first sound we will hear won't be angel song, rather the click and whir of Buck's (presumably) camera. A beautiful service. Adding to Marc's comments, I also appreciated being reminded of the effects our sins have upon others.

AWESOME, Father! It is splendid to see you all in the black, but to actually see a deacon in a dalamtic -- now that is a wonderful sight!

Thank you Father for that Mass, and that Homily. Both truly gifts.

I was struck by the effort families were making to keep their children composed. As a Father of a good sized family I know how difficult that can be with young children. But what was so striking was that at Mass on "any old Sunday" I don't see near this effort, children's misdeeds are handled much more casually or not at all. Even before Mass I heard Mother's whispering to their children in hushed tones. It was so clear that whether conciously or subconciously people perceive the reverance of the EF in a way they simply do not in the OF.

Templar, I made the same mental notes! I was particularly struck by the silence in Church before Mass and the lack of a huge, noisy outburst after Mass (which is, unfortunately, the norm at St. Joseph on any given Sunday).

We had a solemn high requiem yesterday too (though we used the Gregorian chant setting for the Mass). It was absolutely beautiful, and attracted a surprising number of people.

I am so sorry Father! That is my 3 year old in the aisle! My 11 year old was supposed to be watching her while I was at the other end of the pew with the baby (and the other kids between us). She let her sit there for a minute to see her dad who was serving at Mass. As soon as I saw her I quickly got her back in the pew. Again I apologize! I loved the Mass, it was beautiful. Ginger Holder

No need to apologize! You and your children were there and I though the photo was fabulous!!!!! And certainly a classic!