TWO REASONS WHY I AM GERM AND CONTAGION CONSCIOUS 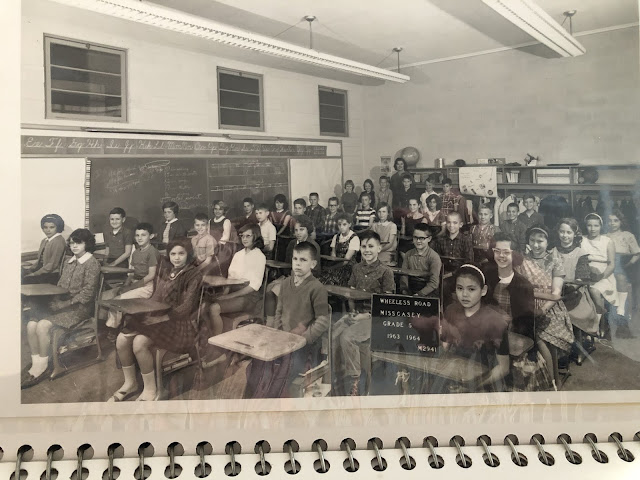 The first reason is I worked at the Dairy Queen from age 14 to 19 where we were taught to take precautions and to make sure things were sanitized for the health of our customers. We also had to answer to the county Board of Health and their monthly inspections. I knew what their checklist was and the manner in which utensils were cleaned and sanitized was of top concern.

My father was also in food service and had a concern for these things too.

The second reason related to the photo above which is a picture of my 5th Grade public school class, the 1963/64 academic year.  That's the year President Kennedy was assassinated on Friday, November 22, 1963. My teacher, Miss Betty Casey, was a good practicing Catholic, was the first to inform our class that the President had been shot and then announced he had died. She had her rosary in hand from the moment she heard of him being shot. She cried telling us he had died.

Miss Casey died last week in Augusta at the age of 89.

In 1991 I returned to Augusta as pastor of the downtown church there and I reconnected with Miss Casey at a variety of events. In the late 1990's her niece who had just become a Freshman at Georgia Southern University, contracted meningitis after drinking from a can a coke she shared with her boyfriend. She came home sick with flu symptoms and in three days she was dead.

I was called to the hospital ICU isolation ward to offer her the Last Rites which included the "Extreme Unction." I had to put on all kinds of protective gear to go into her room and the nurse warned me to be very careful and only use gloves for the anointed and not contaminate the Oil.

She said that doctors refused to go into that room with her. Her skin had turned black from head to toe. It was very sad. She was about 18 or 19 years old.

I offered her funeral Mass at a packed church.

How is Meningitis Spread?

You don't have to keep explaining yourself. Most of us don't care much what Fr. Kav says anyway.

Anonymous at 9:50. He's trying to convince himself, not me.

Fr. Kavanaugh, with all due respect, let's leave mind-reading to the soothsayers and frauds at the local carnival.

The older and in ill health you are, the more likely these viruses will be deadly. The coronavirus is the same way. Very few children have died, apparently none in good health. Of the thousands upon thousands around the world 97.6% have recovered well. It is mostly the older and in ill health who have died, like those in USA.
I do not know the reason for this hysteria, whether it is because of the mass of freaking out atheist baby boomers who are old and getting in poor health, or because there is a universal plot by the MSM to destroy the US economy before the next presidential election. But consider the facts, since the current flu season began, In USA alone 35 million have contracted the flu, and 18,000 have died of it again mainly older frail people. As sorry as I am for them, the number of coronavirus deaths in USA still pales in comparison. Why the hysteria?

FrMJK, Yargh! I agree with your basic position but disagree with the certainty of your conclusion. I, like you, studied microbiology extensively. I won an internship with the Department of Microbiology for three years as an undergrad and maintained the cultures for both student lab studies and for the graduate research. I did graduate work in cell physiology with the focus on the energy cycle. I degreed in Biochemistry. I am *not* a virologist and have never played one on television nor the internet. But understand what I read on those subjects.

First of all, FrAJM is concerned about infectious microorganisms, the variety of which are legion. Some of his concern spans both bacteria and viruses that are as different from one another as fish are from cats. You are correct that viruses are very easily killed outside of their host environment. But that environment can be maintained, temporarily, in the microscopic droplets of a mist hanging in the air for quite some time, the same drops on a surface, etc. We, as a species, are very lucky how temporary that this is. However, we cannot deny that these diseases are very persistent and easily transmitted based on our behavior. So while poor hygiene and health practices may not threaten us on a daily basis they provide a rapid path through society when an organism can exploit it.

By its nature and design the Mass provides a great venue for pathogens of all types. The main actor and leader of the exercise, the priest, can manage that venue to ensure the absolute minimum of opportunity is available for the transmission of disease. I will admit that FrAJM takes his concern very far and may actually miss the opportunity for simple actions that have more impact on the safety of the congregation. Likewise, I will observe respectfully and with Charity that you may unintentionally give a cavalier impression toward the subject and reduce the perceived value of your advice.

Some things in science seem like magic to the uninitiated. If have hope that people will come to appreciate science those uninitiated must first develop trust in the apparently magical outcome based on how their concerns are included in that outcome. They will be slow to develop that trust if they are concerned that the person they need to trust is simply seeking advantage over them.

What does a shared coke have to do with it? Why not a shared kiss with her boyfriend?

Hi Father thanks for the visual picture and the written one as well: I too was 10 (b. 1953) that year, and was in Catholic school in NYS that morning and also remember like it was yesterday when our religious Sister told us of the President's death.
L,H.

rcg - I appreciate your remarks. However, since I have repeatedly referred to the possibility of infection from various sources, since I have referred regularly to reports and research done by medical professionals, and since I have asked for fact-based evidence regarding the supposed "dangers" of the common cup, I don't think anyone can conclude that I have a "cavalier" attitude toward the subject.

One of my tasks in school was to collect research date from published papers on various topics to help the research graduates. It was very common to find direct contradictions in their methods and conclusions. That is, of course what the graduate researchers hoped to find and test. Many of the conclusions were received as truth and subsequent research and practice never looked back, but assumed future problems were based on some other factor. So In the case of FrAJM I think some simple demonstration of a basic procedure, with a test of its effectiveness against various microorganisms, would bring him along to our point of view.