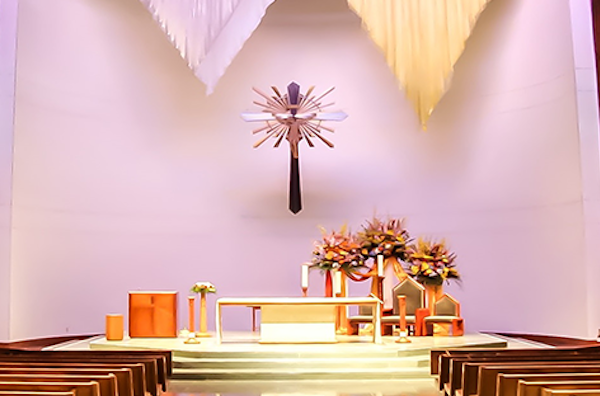 Not awful compared to some but, too cramped, cheap looking altar, uninspiring ambo that looks plucked from a college lecture hall and that off-center candle arrangement is soooooo tired.

the one thing I notice immediately is that all the focus is now on the priest, not the mass.
Way too many priests thrive on being the center of attention, the performer and this setting just drives it, IMHO

Constantly and radically changing the Sanctions makes it look more like theatrical set design rather than a sacred space. I think the phrase “ Hermeneutic of Continuity” should be interpreted when contemplating modifying a church sanctuary. The changes should grow and evolve with relationship to time, tradition and community. They shouldn’t go from traditional to Vatican 2, or from Vatican 2 to something else. Does that make sense?

So true Bee, being from Las Vegas home to hotels it looks very much like a front desk check in. All of this is very simple to fix - high altar, central crucifix, tabernacle, six altar candles, communion rail, Latin and Gregorian chant, altar boys only, kneeling with communion on the tongue, its only been 50 years since the "New Springtime" hit the Church and it can be corrected in no time with a new Pope and return to Tradition. Remember the majority of people attending TLM;s are YOUNG WITH MANY CHILDREN NOT OLD FOGGIES AS WE ARE ALWAYS LED TO BELIEVE.

If I enter the lobby of a hotel and a crucifix is hanging there, I'm definitely checking in.