BOMBSHELL: MY BISHOP TO ATLANTA!

Whispers in the loggia:

Just a couple years ago, upon inheriting one of the great estates of American literature, the leadership of a booming Atlanta church aimed to build its Archbishop a mansion commensurate with Catholicism's newfound status in the Capital of the South....

Not long after it emerged, a public outcry nipped the Smyrna Chancery's designs of grandeur in the bud. Only now, however, is the Pope set to finish the job, placing "Tara" – the crown jewel of the current US docket – into the keep of a Conventual Franciscan more used to sleeping at a Hampton Inn. 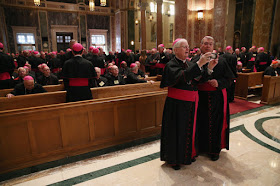 At Roman Noon Thursday, Whispers ops indicate that Francis will name Bishop Gregory Hartmayer OFM Conv., the 68 year-old head of Georgia's southern diocese at Savannah, as the Seventh Archbishop of Atlanta, his adopted home – a 69-county fold now comprising to 1.2 million Catholics – where the Buffalo-born friarled parishes for a decade and a half until being given the hat in 2011. (Above, Hartmayer is seen with his Savannah predecessor, Bishop Kevin Boland, checking phone-shots after the Pope left his speech to the US bishops at Washington's St Matthew's Cathedral in 2015.)

A successor clearly cherished by his mentor – Wilton Gregory, sent to the capital last April 4th – the charge the Archbishop-elect inherits is a world different from the one his venerable predecessor arrived to 15 years ago this winter.

At least doubled in size since, today's 404 church – once seen as the US' seat of African-American Catholicism – is, beyond the ongoing "conversion" of transplants from the North, now a majority-minority outpost thanks to a mass infusion of Hispanics and Asians; a remarkably catholic (i.e. universal) reality that culminates each Corpus Christi weekend with the archdiocese's Eucharistic Congress, which draws an annual flood of over 30,000 faithful, making it the church's largest gathering in the American South
Posted by Fr. Allan J. McDonald at Wednesday, March 04, 2020

Not sure if you can comment Father, but do you know if your bishop is hostile to the TLM or ad oriemtem? My parish in Atlanta has ad oriemtem at all Masses and I wonder if the new bishop will continue to allow my pastor to do this. I hope one day we will have the TLM, but we have a long way to go. It was definitely impossible under Wilton Gregory, so we hope this bishop will not be so against Catholic tradition. I totally understand if you are not able to comment due to "Church politics". God bless.

The cathedral has an EF Mass each Sunday at 1 pm. As far as ad orientem for OF Masses, he usually does not interfere with pastoral decisions.

Maybe Atlanta just dodged a bullet. The rumor on the street was that Atlanta was going to get McElroy, the Uber-left LGBT-obsessed Bishop of San Diego.

While Hartmayer has effectively dodged controversy since taking over in Atlanta, he's about to find out that it won't be so easy in Atlanta.

Archbishop Vigano alleges that Pope Francis was not pleased with Archbishop Chaput because he was an "idealogue".
There's certainly no danger of that with Bishop Hartmayer.

"He's about to find out that it won't be so easy in Atlanta."

Is that because metro Atlanta votes Democratic, like for Obama, Hillary Clinton and Stacey Abrams? Or ultraliberal John Lewis, congressman for the city of Atlanta for 33 years?

I wonder too when someone 68 is appointed somewhere new---is that so he won't serve too long a term there, especially if something "goes south" and it happens to be retirement time?

Actually, I was thinking more about all of the conflicting interest groups and grievance groups and growing LGBT militancy typical of larger cities like Atlanta. So far, Hartmayer has never had to take much of a stand on anything controversial and he has played his cards close to the vest.

I'd suggest looking up Hartmayer's positions on the Faithful Shepherds website--a site that simply reveals the record of bishops on issues like liturgy, LGBT, Pro-Life and social issues. After reading it, you might ask this question: If it was against the law to be a Catholic, would their be enough evidence to convict Bishop Hartmayer?

Draw your own conclusions.

There actually is a Latin Mass parish in Mableton (southern Cobb County) in metro Atlanta, St. Francis de Sales. In an ideal world, a bishop would not be opposed to such---certainly we can have TLM and OF, just as in some Episcopal dioceses (the Savannah-based Episcopal Diocese of Georgia is one example), some parishes still use the old 1928 Prayer Book liturgy as opposed to the newer (and influenced by Vatican 2) 1979 Book of Common Prayer. But alas, we do not live in an ideal world---if anything, the world seems to be getting more chaotic especially with Coronavirus.

In any case, pray for the man. He will need it.

Two months does not leave a lot of transition time to go from one diocese to another---who will handle confirmations in the Diocese of Savannah til new one is named. I suppose the installation is being held in Atlanta's northern suburbs---St. Peter Chanel---because of capacity (Atlanta's cathedral is way too small especially compared with Savannah's)and it is symbolic of where the heart or biggest concentration of Atlanta area Catholics are, in the suburbs north of Interstate 285 and between Interstates 75 and 85---basically east Cobb, north Fulton, north DeKalb and northwest Gwinnett.

Interestingly enough our parish confirmation is on May 6th the day that Archbishop Hartmayer is no longer our bishop and everyone from here will go to it I guess.

We've been told if no bishop is available the dean of the deanery will be delegated or the pastor. So I may have my first confirmation apart from RCIA confirmations at the Easter Vigil here at St. Anne's.

Dean or the pastor - you.

Anon 9:01 I would agree with your statement about Bishop Hartmayer, like most Bishops these day he’s more politician then shepherd. He stands for nothing like 99.9 percent of all Bishop’s in the anti-church of VII

Anon 9:01 to Paul McCarthy (I guess not to be confused with Paul McCartney of Beatles fame!)---what exactly makes a bishop more like a politician than a statesman? I mean, it is not as if Catholic clergy can run for office. Who would you rather have in that position? I do wonder why the current diocesan administrator was not chosen, but of course the selection process has all the transparency of a visit to the CIA or selection of members at a country club, so I am not hopeful of finding out more about that.

"I do wonder why the current diocesan administrator was not chosen, but of course the selection process has all the transparency of a visit to the CIA or selection of members at a country club, so I am not hopeful of finding out more about that."

First, it is none of your business why Bishop Konzen was not chosen. None.

Second, the process isn't supposed to be transparent. Can you imagine all the world knowing that Frs. Smith, and Jones, and Williams, very well-liked and able pastors in the Archdiocese, were all considered but not chosen? How difficult would that make the lives of these "rejected" priests? And once it is known that Fr. Smith or Jones or Williams wasn't chosen, the transparency advocates start mumuring, "Hmmm, what don't we ALL know that they know about these guys..."?

Third, those responsible for making the selection may well have given him all due consideration and for perfectly legitimate reasons, concluded that he is not the best candidate.

Forth, he may have been asked to serve as Archbishop of Atlanta and declined the offer. Maybe he has serious physical limitations due to some chronic illness. Maybe he is bravely battling the recent diagnosis of some potentially debilitating condition.

Oh, but let's be transparent! Baloney.