Does the post Vatican II Church and her liturgy inspire what the great saints of old courageously did and accomplished for 1,900 years prior to Vatican II?

From the Deacon’s Bench: 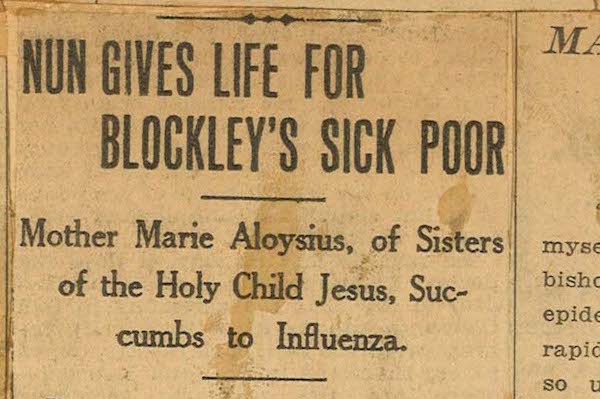 MUST-READ: HOW CATHOLIC PHILADELPHIA RESPONDED TO THE INFLUENZA EPIDEMIC OF 1918

Here’s an important and stirring reminder of the pandemic that claimed 50 million lives around the world a century ago.  The Catholic Historical Research Center of Philadelphia offer us this snapshot from its archdiocese:

On October 3, 1918, the Board of Health of the city of Philadelphia ordered the closing of all schools and suspended church services until further notice. The ban would remain in effect for most of October, being lifted once the flu ran its course on the 26th. Archbishop Dennis Dougherty offered the use of archdiocesan buildings as temporary hospitals and enlisted all priests, non-cloistered nuns, and the members of the Society of St. Vincent de Paul to aid the victims of the flu. The sisters of numerous religious orders across the city would play an indispensable role in fighting the flu.
Throughout the course of the flu, over 2,000 nuns, about two-thirds of all sisters in the archdiocese, helped care for the sick, functioning mainly as nurses in hospitals across the city. The Sisters of the Blessed Sacrament for instance were sent to the Municipal Hospital as well as acted as private nurses, going door to door in poor neighborhoods to find and care for the sick. The sisters who taught as St. Peters Claver’s School helped turn the building into an emergency hospital and served as nurses for the close to 50 patients who would be treated in the building. The Sisters of the Third Order of St. Francis also were deeply involved in the fight against the flu as the sisters ran three hospitals, St. Agnes, St. Mary, and St. Joseph, which together saw over 1,300 patients. Other religious orders that sent nurses to various hospitals across the city included Sisters of the Holy Child Jesus, Sisters of the Immaculate Heart, Sisters of Saint Joseph, Sisters of Mercy, and Sisters of Notre Dame de Namur.
An account from an IHM nun recalls entering houses and finding entire families sick in bed together with no one to care for them. When this happened the sisters would bathe the sick, clean the house and then prepare food and medicine for the sick. Sisters working in the hospitals, despite a lack of experience, were tasked with mixing medicines as well as taking temperatures and feeding the sick. Many sisters worked 12 hours shifts, with one stating that “through this experience I have learned to appreciate my vocation to the religious life more than ever before.”

Read it all.
Deeper in the site, you’ll find accounts of how seminarians helped in the hospitals and cemeteries, and learn how others in the city helped the people cope.  Check it out.
Posted by Fr. Allan J. McDonald at Tuesday, March 10, 2020

We actually have prayers for times of pestilence. Historically, the Church has had penitential processions when plagues and diseases have hit us hard. The Church has begged God not to unleash His wrath upon us at these times and penance and prayer have ended such plagues. Most notably, Gregory I led a HUGE procession through Rome at the time of a terrible plague that killed his predecessor in 590.

Contrast that with now: We have bishops and cardinals who "know better" telling us that God never punishes us that way (all that old stuff was just superstition--you know just like the Real Presence).

Did it ever just once, cross our minds that maybe God isn't happy about objects (idols) of pagan worship being brought into the churches in Rome with the blessings and encouragement of a pope? Is that possible? Just MAYBE?

During the Black Death of 1348-50 the highest mortality was among the clergy. To his credit, Pope Clement VI remained in Avignon and even led penitential processions (until they got out of hand with too much self-flagellation) although, on the advice of his doctor, he spent most of the day and night isolated in a room in the papal palace between two enormous fires.

Figures are unreliable, but perhaps half the population of the city perished.

I dare to say it is blasphemous to say Our Lord in Holy Communion is the source of disease. (We humans on the otherhand) Imagine if the scriptures said "Greet one another with a holy kiss, except when the plagues go around" how ridiculous that sounds. And the apostles were dealing with active persecution from the governments and other faith, and still received Holy Communion. This whole corona virus thing will blow over once the election is over anyway (one is more likely to die from the actual flu anyway)...Take precautions, sure, but are we not to lay aside all earthly care at the Liturgy anyway? Is it any wonder Our Lord tells us. When He comes back, will He find faith. The Bishops are right Our Lord Himself in Holy Communion is not the source of disease, for He is the Divine Physician. Many have been healed by Our Lord in Holy Communion, and it's not a superstition...We approach with faith, and fear. If we do not believe that it is Our Lord in Holy Communion, why bother approaching the Holy Mysteries? It is unfortunate that many bishops in the west are acting as if they have minimal to no faith.