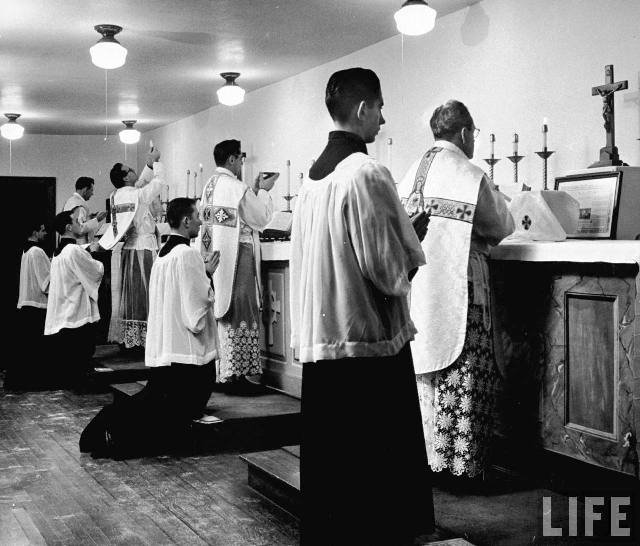 Here’s the stupid article. Read and pray for an end to this stupidity:

Private Mass Does Not Fit with a Contemporary Understanding of Eucharist
Posted by Fr. Allan J. McDonald at Thursday, March 19, 2020

I knew an old Friar who told me that the worst part of Vatican II was that with its emphasis on communal mass and con-celebration, it reduced the total number of masses said each day. Whereas in the old rite they would often have many masses at all the side altars as each priest offered his mass.

The authors of the article at Praytell inveigh against the offering of Holy Mass in the absence of the faithful.

First problem: when I offer Mass, am not I a member of the faithful? The authors stressed the point that laity must be present. So if other priests are present, that's not good enough either!

But here is the thing that is truly amazing:

They do not consider anyone not flesh-and-blood to be among the faithful!

This morning I offered Holy Mass in a "private" fashion. That is, no other member of the Church militant was present. But was I alone?

Praytell says I was. Too bad for you, Blessed Mother, St. Joseph and all the saints! Praytell doesn't believe you exist, or else, you aren't really present at Mass! Too bad for you, souls in purgatory!

It is likewise amazing to see commenters preferring that Mass not be celebrated -- at all! -- if other members of the Church militant cannot be present. So apparently they do not see any value to the Mass, beyond what you experience while in the room. Astounding!

You two gentlemen are the exception. We are living in a time when so many priests and their bishops do not want to deal with the truth. The revolution in the Church is complete and we are living in a false Church (oh, they ARE validly ordained and they DO confect the Sacraments) that is being controlled by Satan. We sat back and imbibed this garbage after Vatican II and it is now an almost W force that resists correction. Pope Leo saw a vision of this time and it terrified him. Padre Pio even told Fr. Gabriel Amorth that the 3rd Secret of Fatima was about a false Church of apostasy that would reign in the end times. How long until the end? None of us knows, but we cling to the promise that Mary's Immaculate Heart will triumph and there are still a few faithful priests who are using their vocation to serve God in Truth. Thank you for your service.

Well I for one appreciate your offering Mass even though we cannot be there with you.

Praytell (PraySniff) is a left-wing loon blog for left wing loonies who are no longer Catholic in any meaningful sense of the word. If you disagree with their positions you are banned. So tolerant, so liberal

It IS amazing! But not really. To me, this theology of the Mass is what they have been pushing since the 1970's. I live in very liberal Chicago, and so this really is the attitude of the great majority of "with it" and "enlightened" priests here. If you give any indication otherwise, there is visible contempt and scorn from them, and they begin "social distancing," to say the least! :-)

I am no rad-trad. I just believe what the Church taught about itself pre-Vatican II, and understand fully the change in the rite was not a change in ecclesiology. Or was it?

And so it comes down to what are we actually doing at Mass...worshiping God by offering Christ's sacrifice to Him for the redemption of the world, or having a formal Sunday dinner with the family?

According to many running the post-Vatican II Church, it's the latter. And so in a time of crises, that Church has no function, or anything to say, except disband and stay home. It's of the world, and as such, acts like the world.

So glad this "new" theology is being exposed for what it is...vacuous.

I do not know if you can call this article stupid but it is based on the perversions of the liturgical movement(LM), particularly of its Germanic/Austrian intellectual heritage (eg Jungmann). We again find the motto of the liturgical movement expressed in this article: Active participation of the community, as if it is the community that is saved, not the individual. The stress on community had little to do with theology but had more to do with an importation of Marxist political ideology that became very popular at the beginning of the last century in Europe, and the Protestant stress on the priesthood of believers was the pretext for this. Why it persists, particularly in the Germanic/Austrian ivory towers today perhaps comes from the shear wealth of these Church institutions through government taxation (includes Austria) which seems to create comfy idle minds seeking for things to think about; but as we know such minds are often the workshop of Satan. In any case, their thoughts are completely removed from the average Catholics in the pew, or what is now left of them after their perversions took hold in the Church.
It is interesting how the LM became regarded as the work of divine providence even by some popes, finally allowing it to compose Sacrosanctum Concilium (SC) for the most part, and then directing the liturgical reforms following the Council, again stressing active participation of the community rather than proper worship of God. As this article shows, these adherents to the LM vehemently regard SC as Divine Revelation.
But unfortunately, SC is not divine revelation, but a purely disciplinary document for the times. It is a document that can be altered or suppressed in view of the times which are always changing. Actually it is a document that was already past its prime when promulgated, a document which was strongly influenced by the optimism following WW2 which no longer exists.

The article supposes that with no earthly community present, the priest is alone and performing a useless action. But the priest celebrating Mass is never alone but is always accompanied by the angels and the communion of Saints of the Church Triumphant. Do these adherents of the LM still believe in such things in this day and age? Taken to its logical conclusion as this article does, without the earthly community present there is no point to the Mass. No one should wonder why so many people left the Church when personal union with God was suppressed in the liturgy in favour of such abstract community participation.

The purpose of the liturgy is to worship God. The benefit of such worship for earthly participants is a union of God and the individual in the pew. Specifically, the Mass as worship means partaking in the Sacrifice whether by consuming the sacred Sacrifice, or by just viewing it as was popular in the Middle Ages for a spiritual communion. But if one does not believe in the Real Presence, there is nothing important to view, is there? The purpose of the fore Mass (ie readings) is to prepare the individuals for such communion. But it seems even consuming the bread and wine, particularly with the common cup, has become an action of solidarity of the earthly community; but in that case the community has become more of a type of support group than individuals actually seeking to bring God into their hearts through a personal Love of Him. The traditional Latin Mass is about the individual getting to heaven, not the community, which is why so many in the LM, particularly Jungmann hated it so much.

Priests should constantly remind people through social media that they are praying the Mass for all, even though no one else is permitted to attend.

So the post-conciliar GIRM does not fit with a contemporary understanding of the Eucharist?

Jake:
"254. Mass should not be celebrated without a minister, or at least one of the faithful, except for a just and reasonable cause. In this case, the greetings, the instructions, and the blessing at the end of Mass are omitted."

The idea of "should not" tells everything about the Novus Ordo Mass: The communion of Saints or angels do not exist anymore. Only the earthly community exists.

Wow! This article made me so mad. Who are these people? I am so very grateful for the good and holy priests who are celebrating Masses in empty churches. It is a great consolation to the faithful in these trying times. God bless all of you!

I think you may have missed my point. It is a longstanding custom that only in very exceptional circumstances should priests celebrate Mass without a minister/server. This is not a post-Vatican II rule (see the Ritus Servandus of the Missal of St Pius V). What is known in the current GIRM as 'Mass at which only one minister participates' (i.e. a server) was called 'Mass without a congregation'in an earlier edition of the GIRM. The post-Vatican II GIRM actually provides for what some people describe as 'private masses, which are now being promoted by bishops around the world in response to COVID-19.

"254. Mass should not be celebrated without a minister, or at least one of the faithful, except for a just and reasonable cause. In this case, the greetings, the instructions, and the blessing at the end of Mass are omitted."

Somewhere along the line, I was told that a "just and reasonable cause" includes a priest's day of rest, or his vacation or retreat. Hence, I have many times offered Holy Mass, without a single other flesh-and-blood person present, with a clear conscience.

The point of the provision is, I think, to have such things be exceptions, but with some reason, rather than no reason.

But the notion that a priest doing what I described is doing something wrong is for the birds.

Ole Ruffles and his vacuous ideas are as useful as an empty bag of potato chips. These idiots would rather no mass be offered. And, Father Martin is correct, they ignore the cloud of witnesses spoken of in Hebrews. Maybe it is because they no longer believe that Mary stands behind the priest or St. Michael stands to the right of the priest with a censer.

Well, I will pray for them.

Prayers for you Fathers Allan, Martin and Mike.