WOW! THIS BOMBSHELL FROM POPE FRANCIS WAS SHARED WITH THE BISHOPS OF OUR REGION TODAY INCLUDING BISHOP GREGORY HARTMAYER OF MY DIOCESE AND OUR EMERITUS BISHOP J. KEVIN BOLAND

The Holy Father really sets the record straight and what the Amazon Synod was suppose to be and what it wasn't suppose to be (evidently hijacked by some there, like the German Bishops you think).

This is good news indeed!!!

This hot off the press from Crux:

Pope shares with U.S. bishops his frustration with reaction to Amazon text (and the National Chismatic Reporter crowd will be wailing and gnashing their teeth!) 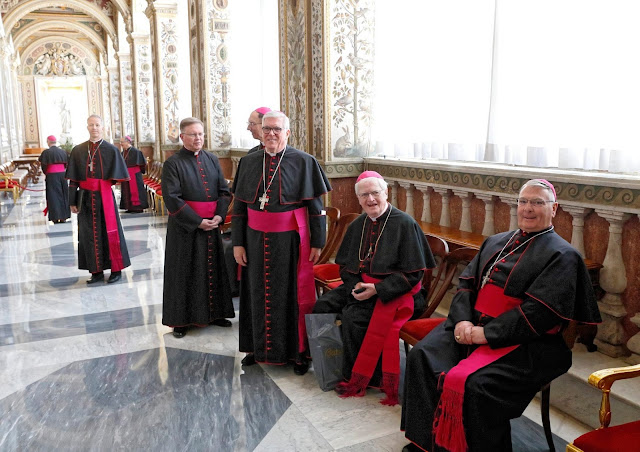 U.S. bishops wait to meet Pope Francis in the Apostolic Palace at the Vatican Feb. 13, 2020. Bishops from Florida, Georgia, North Carolina and South Carolina were making their “ad limina” visits to the Vatican to report on the status of their dioceses to the pope and Vatican officials. (Credit: Paul Haring/CNS.)

ROME - Pope Francis told a group of U.S. bishops that, like them, he is accused of not being courageous or not listening to the Holy Spirit when he says or does something someone disagrees with - like not mentioning married priests in his document on the Amazon.

“You could see his consternation when he said that for some people it was all about celibacy and not about the Amazon,” said Bishop William A. Wack of Pensacola-Tallahassee.

“He said some people say he is not courageous because he didn’t listen to the Spirit,” the bishop told Catholic News Service Feb. 13. “He said, ‘So they’re not mad at the Spirit. They’re mad at me down here,’” as if they assume the Holy Spirit agreed with them.

Wack was one of 15 bishops from Florida, Georgia, North Carolina and South Carolina who spent close to three hours with Francis Feb. 13 as part of their ad limina visits to the Vatican. They were joined by two from Arizona - Bishop Edward J. Weisenburger of Tucson and Auxiliary Bishop Eduardo A. Nevares of Phoenix - who had been unable to meet the pope with their group Feb. 10.
During the meeting, one bishop asked Francis for three or four points he would like them to share with their people from the document Querida Amazonia (Beloved Amazonia), which was released the day before and offered the pope’s reflections on the Synod of Bishops for the Amazon.

Auxiliary Bishop Joel M. Konzen of Atlanta told CNS the pope said the most important message in the document for U.S. Catholics is to care for the planet, “that this is a grave matter.”

Then, he said, the pope told the bishops that months or even years go into producing documents and what gets reported by the media “is one line” or that “the pope didn’t have the courage to change the rules of the Church.”

Wack said the pope told them the synod met “‘to talk about the issues of the Church in the Amazon. Other people wanted me to talk about celibacy. They made that the issue. But that wasn’t the issue of this synod.’”


Francis told the bishops that they and their priests must teach and preach about care for the environment, Wack said. “He said even if people don’t want to hear it. How can we deny that things are changing? How can we deny that we’re hurting our future? And he said, if we don’t talk about these things, well, shame on us. We have to preach the Gospel, and this is part of the Gospel.”

Archbishop Thomas G. Wenski of Miami said Francis also talked about what he means by “synodality” and members of the Church listening to each other, praying about issues and trying to discern a way forward together. The synod, he said, is not “a parliament in which people take majority votes on a whole bunch of issues.”

Among the reactions concerning the exhortation that caught Francis’s eye, he said, was a commentary that said “the pope lacked courage” on the issue of ordaining married men.

If discernment and the action of the Holy Spirit are missing then it is just “a meeting and it’s people sharing opinions and maybe research, but it’s not necessarily a synod unless it’s in some way governed by the Holy Spirit,” Konzen said.

Wack said Francis also explained that synodality and discernment are processes that continue even after a synod has met and a document has been published.

“He said, ‘You can’t just meet once and then say, “Oh, we have all the answers,” but the conversation continues,’” the bishop said. “And so, he said, ‘What we did is we raised these issues, and now we have to deal with them,’” continuing to invoke the Holy Spirit and discern the path for the future.
As with the 13 groups of U.S. bishops that preceded them, the bishops also spoke with the pope about the clerical sexual abuse crisis, immigration, youth and young adult ministry and what it means to be a bishop.

Francis spoke at length about being a bishop, he said. “He said if we’re too busy doing other things, we put those aside; we pray, and we preach, and we serve our people.”

The bishops’ meeting with the pope, he added, was a moment to “be with the pope, see the pope and to hear the pope” in a relaxed atmosphere and discuss issues “that concern us bishops throughout the world.”

“That was a great opportunity because oftentimes, as bishops, we experience the pope through the filter of the news media. And it’s good to experience him without that filter; (to) experience him face to face,” he said.
Contributing to this story were Cindy Wooden, Junno Arocho Esteves and Carol Glatz.
Posted by Fr. Allan J. McDonald at Thursday, February 13, 2020

I’m glad Francis had a chance to work out his frustrations. It must be hard for him to keep his emotions bottled up all the time. It’s a good thing our bishops were there to lend a friendly ear and serve as Agony Aunt.

When does the McCarrick report come out?

I can’t read this post because of the trigger word involved...sorry.

The Church's two extreme wings, as well as their secular counterparts, promoted the celibacy angle...just as they had reduced Amoris Letitia to that of Communion for those who had divorced and remarried.

At least via the blogosphere, and in regard to the Synod, right-wing Catholics have been extremely irresponsible during the past few months.

Led by the discredited Rorate Caeli outfit, the right declared repeatedly that "Bergoglio" had rigged the Synod to ensure the destruction of Latin Church priestly celibacy.

But that won't stop the right-wing from continuing to concoct false narratives to defame, as well as promote rebellion, against the Vicar of Christ.

In turn, the left-wing will continue to attack priestly celibacy.

But in between the two extreme wings will stand countless Catholics who love, support, and obey our wonderful Culture of Life Pope Francis.

Well, Mr. Thomas is starting to sound more like a politician, always making sure to emphasize how "discredited" Rorate Caeli is (as if websites were supposed to be infallible). Reminds me of Nancy Pelosi, "Because the failed policies of the current administration" or Senator Mitch McConnell "Because of the failed policy of the Obama administration". Hint: "Mark Thomas"--that kind of rhetoric gets very stale quickly.

But what of Pope Bergoglio? If he means what he says, maybe this is a good thing. Given the track record, I fear this is just another case of him throwing faithful Catholics a bone before he does something completely horrible.

No one mentions the 1st commandment and Jorge’s approval of idol worship and the Son of Ambiguity approved the final synodal document which calls for the ordination of married men.

Are you all fooled that easily?

If the Pope had said the complete opposite, Mark Thomas would have whole-heartedly endorsed him. However, since he is locked into a dualistic fantasy of extreme right-wingers and extreme left-wingers (with the vast majority, including the Pope and the bishops, not to mention MT himself, occupying a centre ground which apparently thinks as one), he overlooks some key points.

Those who claim that Francis is a great reformer, intent on creating a 'paradigm shift' on matters such as priestly celibacy and the role of women in the Church, are not 'right-wing' Francis-haters, but prominent supporters of the Bergoglio papacy. They include the likes of Austen Ivereigh and John L Allen Jr, along with some close to the Pope himself (Fernandez, Spadaro, Rosica i.a.).

Those who would like to see the Church change its doctrine on celibacy, women's ordination and sexual morality are not a small group of 'left-wingers' - they probably make up a majority of Mass-going Catholics in the US according to poll data.

Francis has a knack of deliberately raising expectations and then dashing them. When he was elected PrayTell confidently predicted that Summorum Pontificum would be rescinded. The last seven years have seen a steady increase in the number of priests and bishops who celebrate the old Rite. In 2016 he established a commission to look at historical precedents for ordaining women deacons; as expected it simply agreed to disagree. The idea of ordaining as priests married 'viri probati' was another example of kite-flying. Again Francis has kicked the can down the road.

He's now 83, five years older than Benedict was when he assumed the papacy. Traditionalists are not disappointed with him - they didn't expect a lot in the first place.

But liberals, sensing that time is running out, must be getting desperate.