THE POPE REITERATES WHAT I HAVE TAUGHT FOR 40 YEARS AS TO WHY IT IS IMPOSSIBLE FOR THE CHURCH TO ORDAIN WOMEN—IT IS BASED ON THE SPOUSAL RELATIONSHIP OF CHRIST, THE GROOM AND THE CHURCH HIS BRIDE, WHICH THE PRIEST AND THE MASS SIGNIFY IN A SACRAMENTAL WAY. 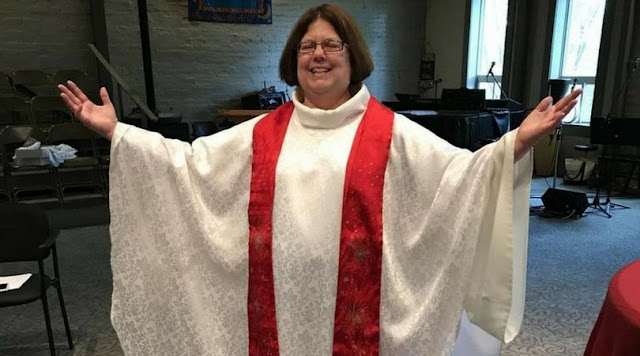 This is from the National Chismatic Reporter which must be whaling or wailing, your choice, and gnashing their teeth! They've been fishing for heterodoxy for a long time!!!! And whaling now is illegal as is heterodoxy!

In the apostolic exhortation, Francis acknowledges there are communities across the Amazon that have preserved in faith "because of the presence of strong and generous women who, undoubtedly called and prompted by the Holy Spirit, baptized, catechized, prayed and acted as missionaries."
But the pontiff warns against the church restricting its understanding of itself to a consideration only of its "functional structures."
"Such a reductionism would lead us to believe that women would be granted a greater status and participation in the Church only if they were admitted to Holy Orders," he says.
"But that approach would in fact narrow our vision; it would lead us to clericalize women, diminish the great value of what they have already accomplished, and subtly make their indispensable contribution less effective," he continues.
Turning to how the church understands the role the priest plays during the Mass, Francis states: "Jesus Christ appears as the Spouse of the community that celebrates the Eucharist through the figure of a man who presides as a sign of the one Priest."
"This dialogue between the Spouse and his Bride, which arises in adoration and sanctifies the community, should not trap us in partial conceptions of power in the Church," the pope says.


And in terms of big lavish signs for the Sacraments, make sure we ordain big, manly men with muscles and facial hair produced by high levels of testosterone! That will please modern liturgists!

That silly-looking woman in the chasuble and stole may not know it, but she has excommunicated herself.

I knew someone who found that out the hard way. She ended up being denied Communion at her son's funeral. Fortunately, she took the path back (and it was a hard path) to reunion with the Church.

Seeing a woman play priest is like seeing Protestant ministers in Roman collars. It's all just play-acting and self-dishonesty.

How tacky of her to wear a stole over her chasuble! Really?

We had a Catholic priestess ordained directly by God at the Vatican in Macon. God rest her soul. She attended St. Joseph Church and a few other parishes too. She'd ask to concelebrate but I always said no to her. Nonetheless, she would come to Mass in her chasuble and bring her own bread and wine to consecrate and receive.

But that wasn't the worst of it! She always wore the wrong liturgical color which really drove me crazy!

Oh, by all means, let's attract men with high levels of testosterone to the priesthood.

So we already have high testosterone men in the priesthood! My bad!

Anonymous, you have none of those problems to worry about......

"My comments: Holy Father, laymen too have preserved the Faith in the absence of a priest in many places. Just think of Korea which preserved the Faith of the preVatican II Church centuries ago.
And in terms of big lavish signs for the Sacraments, make sure we ordain big, manly men with muscles and facial hair produced by high levels of testosterone! That will please modern liturgists."

anon
I'll take a high testosterone man as a priest over the limp wristed twats I've been exposed to in the past
to quote Fr Z https://wdtprs.com/2020/02/priestly-not-prissily/
one of the best priests I have had the fortune to know was 6ft 2 and filled a doorway, five o clock shadow by noon, former marine Chaplin, yet when he said mass you could see the devotion, and believe me he didn't have a prissy voice. He got several vocations from our parish, first in maybe 30 years, the young men flocked to him, unfortunately he is now retired, horrible back problems, still fills in once in a blue moon. Complains that it ruined his golf game

I thought our exemplar for “manliness” was supposed to be Jesus, not John Wayne. Clearly, I must have been mistaken.

Anon 2 - You are absolutely correct.

American Exceptionalism combined with Protestant Assurance of Salvation combined with the last 50 years of Moral Majority-style religious aggressiveness have led to the very wrong-headed understanding of what a manly Christian man is.

Jesus was, above all else, vulnerable. In that He is a very unpalatable image for those who tout the virtues of high testosterone levels in clergy. "Oh, but he made a whip and cleansed the Temple! He was a tough guy!" they say.

But they say that without noting that He did not shield his face from mocking and spitting. He made Himself vulnerable for our salvation. "God made him who had no sin to be sin for us, so that in him we might become the righteousness of God."

Paul, of course, continued the understanding. "That is why, for Christ's sake, I delight in weaknesses, in insults, in hardships, in persecutions, in difficulties. For when I am weak, then I am strong."

John Wayne was good on a movie screen, but isn't a role model for Christian manliness.