ON THIS ASH WEDNESDAY, SHOULD BISHOPS AND PRIESTS AND LITURGY COMMITTEES REPENT OF WHAT WE HAVE DONE WITH REVERENCE, FORMALITY AND THE BEAUTY OF THE MASS AND ERASED IT FOR HYPE AND HYSTERIA? 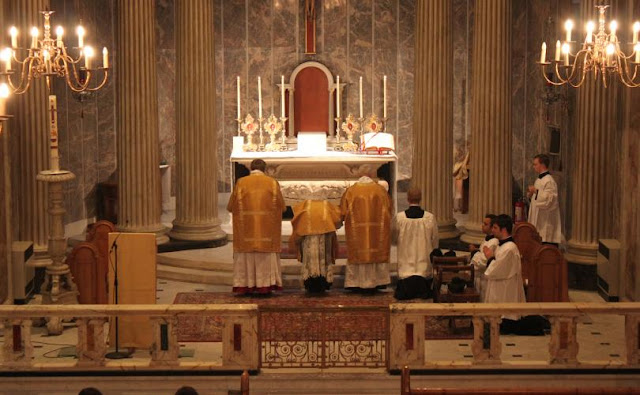 As one who recalls the decline in reverence at Mass immediately following the implementation of the 1970's Roman Missal and the experimentation allowed by the pope and bishops at the time, I am an eyewitness to the post-Vatican II demise of Catholicism and the Mass as the source and summit of our Catholic identity.

Kneeling for communion was deemed archaic. Hushed silence before and after Mass was discouraged. Folk choirs moved into the sanctuary, undisciplined as they were. Lay people, often unqualified and untrained were asked to be lectors and Communion Ministers. Dress became lax and casual.

I went to a Jesuit's first Mass in 1978 and he used crusty French Bread for the Eucharist, which he broke off for each communicant. the crusty parts and the soft parts were all over the floor's red carpet. I was a liberal seminarian and snickered after Mass when the rigid pious types were kneeling on the floor trying to get each particle.

And today, we wonder why so few Catholics actually believe in the real presence of Christ in Holy Communion and that this might be the reason why they no longer attend, join non-denominationals or simply become nones.

And we older Catholics, 60 and upward when exposed to the reverence of the EF Mass think it is old and outdated. We prefer the casualness and comprehensibility of the OF Mass because its like a friendly Last Supper or meal, a happy Meal. We are put out with the EF Mass because it isn't the new and improved Mass of Vatican II and we hate EF sensibilities applied to the OF Mass like kneeling and ad orientem. The 1960's crowed until about 2007 did a great job at denigrating the old Mass and its ethos, ecclesiology and reverence in order the marginalize that Mass and corrupt the faithful with the so-called "new and improved" Mass of Vatican II.

This is what Phil Lawler at CatholicCulture has to say:

Something is terribly, terribly wrong — and has been wrong for years, because the mass exodus (no pun intended) began several decades ago. It should come as no surprise that, in an institution that lost its zeal for evangelization — its enthusiasm for its central mission — other signs of corruption would eventually appear.

Where should we look for a solution to this problem, a remedy for anemic faith? Let’s look to the “source and summit of the Christian life,” the Eucharist. When we think of life in the Catholic Church, we generally think first of Sunday Mass — and so do any non-Catholics and lapsed Catholics who are watching for signs of life. Every believing Catholic recognizes the Eucharistic liturgy as the source of his spiritual life. But do we think of the Sunday Mass in our parish as the summit of our spirituality? Is this the best we can do? Really?

To be sure, the liturgy can never be beautiful enough, never reverent enough, to convey the full meaning of the Eucharist. But are we trying? Or have we slipped into a lackadaisical routine, accepting a liturgical approach that does not even attempt to convey the transcendent glory of the Mass?

Repent? Are you kidding? The plan all along was to DESTROY. Amazonian faces and Fat Tuesday jazz fests for ALL..

Yes. Bishops especially. REPENT AND DO PUBLIC PENANCE FOR YOUR ROLE IN THE POSTCONCILIAR CONFUSION.

Where is the picture of that sanctuary from?

I just got it off the internet, don't know.

Stop knocking the over-60s. We were the generation which had this nonsense forced upon us, by those of our grandparents' generation. The prime mover, Paul VI, was born in the year of Queen Victoria's diamond jubilee.

Our parents' generation soldiered on, usually out of a sense of obligation, but one got the impression that they had had the stuffing knocked out of them. The enthusiasts for the new dispensation were a noisy minority.

Most of our generation simply stayed away, encouraged by the relativism espoused by secular society. What is surprising is that so many of the over-60s still turn out for Mass, not that younger generations prefer more traditional styles of worship. When I (as I invariably do) attend sung Latin Mass in either form, I am struck by the number of much younger people present, and in the case of the Oratory fathers the youthfulness of the clergy.

As long as the Mass is treated as a social banquet rather than the Sacrifice of Christ on the Cross; the clergy think it's 'pastoral' to encourage clapping for everyone's 'accomplishments'; make off the cuff casual comments during Mass which stab at reverence; never, ever, preach about mortal sin and sacrilege while watching everyone going to Holy Communion every week but hardly if ever going to the Sacrament of Penance; are content with doing just the bare minimum liturgy every week and not preparing well, nothing will change. As an aside, there are prayers in the back of the Missal for priests to pray before and after Mass. I wonder how many actually do pray these, or consider them just optional. Let's face the fact that the congregation takes their cues from how the clergy celebrate: in the person of Christ or MC at a banquet.