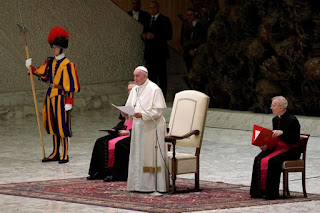 ROME - Talking about debates, differences and discernment, Pope Francis told a group of U.S. bishops that people focused on the possibility of ordaining some married men and women deacons for service in the Amazon will be disappointed in his apostolic exhortation.
Posted by Fr. Allan J. McDonald at Tuesday, February 11, 2020

Rorate Caeli, as well as additional Pope Francis-hating "traditionalists," assured us for months that...

-- Pope Francis rigged the Synod so as to destroy priestly celibacy.

The Synod's purpose was to shatter priestly celibacy throughout the Latin Church.

Today, Rorate Caeli, has flip-flopped after months of having defamed Pope Francis, trashed the Synod...and having declared with certainty that Pope Francis would destroy priestly celibacy via the Exhortation.

"Rorate has learned that, at the current state of the text, Catholics should remain positive regarding the most controversial points of the post-synodal Apostolic Exhortation “Querida Amazonia”, to be published tomorrow.

"Those who saw this text two days ago (it will almost certainly be presented on February 12) said that the two hotly debated categories are not mentioned in the document and thus there is no official opening up [to them]."

Should the above prove valid, then it will be interesting tomorrow to observe as to how Rorate Caeli, as well as additional Pope Francis' hating bloggers/twitter folks, will extricate themselves from the defamation that they've unleashed in recent months in regard to Pope Francis/the Synod/and Celibacy.

Deo gratias for our holy and great Culture of Life gift from God — that is, Pope Francis.

I thought Francis already pushed out the approved talking points to all the Bishops so they can echo the party line.

When's the McCarrick report come out? I don't understand why the Bishops out be asking any other question. When does Rome quit stonewalling and covering up? Except if they know their names are in it, in which case, they might be asking to have to report delayed further.