IS THE SECOND VATICAN COUNCIL THE REASON WHY THERE ARE SO FEW VOCATIONS TO THE PRIESTHOOD AND RELIGIOUS LIFE TODAY, SOME 50 YEARS AFTER THE MUCH TOUTED "NEW SPRINGTIME FOR THE CHURCH?"

This is not the way to go if you want more vocations to the priesthood in the Amazon or anywhere else in the world. This photo is of an "extraordinary" minister of Communion offering Holy Communion at the opening Synodal Mass for Germany in January to a bishop in his street garb. What nonsense! 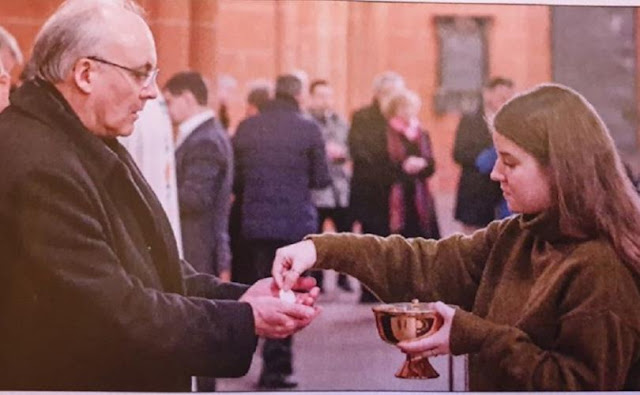 I would not say that Vatican II is the problem so much as what happened after Vatican II and an interpretation of it that juxtaposes it as new and improved over what had preceded the council.

It was post-Vatican II liturgical ambiguities and experimentation that began the downfall. Also, the belief that once some things had changed, all things would change.

I remember reading something in the early 1970's as I was discerning my vocation that God wanted fewer priests and religious so that the laity might be empowered to take their rightful place in the leadership of the Church and her (its) ministries.

I was also taught a speculative theology that came from Holland, I think, that in the future (which would be today) congregations would pick their own presider for the Eucharist based upon his or her charisms in terms of leadership and preaching. Ordination would not be necessary in this egalitarian Church.

Germany and other places in Europe where the Catholic Church is dying as well as its priesthood is a prime example of trying over and over again with an old ideology born  in the 70's to see if it will work today. Just mark that failed!

And thus I read this article, a portion of which I post, along with the photo above as proof that a true schism is taking place in Germany with its roots in Holland in the late 60's and early 70's. Catholicism is almost dead in Holland and the same is true in Germany in some places, what replaces it is ugly and uninspiring and not worthy of the Church Jesus founded.

FRANKFURT, Germany, February 11, 2020 (LifeSiteNews) — The opening Mass prior to the first assembly of the synodal path in Germany last January emphasized an alleged equality of bishops, priests, and deacons on the one hand and laypeople on the other. With the exceptions of three bishops concelebrating the Mass, all clergy were sitting in the pews, indistinguishable from any laypeople.

At one point, lay extraordinary ministers were photographed giving Holy Communion to bishops and priests who were not wearing liturgical garments.

Cardinal Rainer Maria Woelki had already voiced his criticism of the opening Mass in an interview. Pointing to the fact that bishops and laypeople had walked in together in procession, he said this indicates “that everybody here is equal.” This has “actually nothing to do with what the Catholic Church is and holds,” the archbishop of Cologne said.

Read the rest there.
Posted by Fr. Allan J. McDonald at Wednesday, February 12, 2020

Yes, that picture is distressing and is a good example of how messed up the church is. That wrong understanding of the church has helped contribute to the decline in vocations, I believe. Other things have contributed as well,a secular outlook, materialism, worldliness and so on. A priest friend was recently saying how difficult it is to get good young men to even think about the priesthood. They and their parents see the priesthood and the church as a very troubled institutions. And they do not trust the bishops at all.

FSSP parishes and FSPX parishes are providing vocations galore. I wonder why that is? I don't wonder, I know. The ministerial priesthood is exalted in the Extraordinary Form of the Mass. When I celebrate it, I actually feel like a priest in continuity with the Old Testament prefiguring of it.

Prior to Vatican II, being a priest was seen an manly and manly men applied. Anyone that wasn't manly acting was normally rejected. I'm not saying that pathologically inclined manly men didn't get through, but there was an abundance of heterosexual men entering the seminary and willing to make the sacrifices necessary, similar to men entering the military and willing to sacrifice their lives, literally, for our country.

The feminized liturgy entices men who are more artsy and less manly. Those who like to rearrange the furniture and experiment with the Mass in creative ways. That doesn't mean that they are unfaithful to their priestly promises, but it doesn't encourage manly men to consider the priesthood if the priesthood is seen as soft, uninspiring and lacking in authentic sacrifice.

"IS THE SECOND VATICAN COUNCIL THE REASON WHY THERE ARE SO FEW VOCATIONS TO THE PRIESTHOOD AND RELIGIOUS LIFE TODAY, SOME 50 YEARS AFTER THE MUCH TOUTED "NEW SPRINGTIME FOR THE CHURCH?"

Look at the woman I post simulating a priest and her gesture and then look at the same gesture in the Extraordinary form by a real priest. Then compare the gesture of the woman to what post-Vatican II liturgists want priests to do.

I remember Fr. Stephan Rossetti making my same point in terms of the gestures I just mention. Facing the congregation with these big, wide open arms is a symbolic of female sexuality and receptiveness to the male sex partner, hopefully her husband. It says, here I am and I'm available. It is a feminine gesture in the symbolic sense.

What is a feminized liturgy?

A liturgy that is so flexible that it allows priests to "ad-lib" the rubrics.

A liturgy that is dumbed-down.

A liturgy that focuses on making the congregation feel important.

A liturgy that doesn't focus on the hard fact that the death and resurrection of Jesus Christ is being re-presented in an unbloody manner and that everyone in the Congregation needs to reflect this miraculous event with due reverence.

A liturgy that implicitly rebukes tradition by ignoring it.

A liturgy that does not focus on the sacrificial Act and the unworthiness of all, emphasizing that it is God's MERCY and only His Mercy that makes us worthy.

A liturgy that doesn't use the infantile musical feces provided for in the Glory and Praise hymnals.

A liturgy that compromises so that no "special" groups feel left out.

I could go on, but I think any intelligent person can get the pattern.

I would especially add that a feminized liturgy is one in which the laity is not only allowed, but encouraged to touch the Consecrated Species.

"Facing the congregation with these big, wide open arms is a symbolic of female sexuality and receptiveness to the male sex partner, hopefully her husband."

Msgr. Rossetti and you are reaching with this notion of "female receptiveness."

Think of the iconic photos of Pope Pius XII with arms stretched as wide as possible. One photo of him in this position bears the notation, "To emphasize his special role as intercessor, especially during World War II, Pope Pius often prayed publicly with arms outstretched." The photos saw included one of him standing on the platform as the sedia gestatoria is being carried, standing outside a car surrounded by servicemen, and one on the balcony overlooking St. Peter's Square.

Was his gesture too "feminine?"

How many fathers return home and, as their children run to greet them, spread wide their arms preparing to embrace their young ones?

Is this too "feminine?"

I sometimes attend Mass at a parish where they have the usual march of "Eucharistic Ministers" coming up after the consecration. They've now taken to wearing something to set them apart, a sort of "pallium". THEY ALL LOOK RIDICULOUS.

We DEFINITELY NEITHER NEED NOR WANT FEMALE "Eucharistic Ministers". It reeks of an ethos which suggests, "someday, baby...someday!"

Jesus was a MAN. He died LIKE A MAN. He took on the Devil LIKE A MAN.

Like any man, I love women. However we live in a most unfeminine age when most women seem to be at war with themselves, because they have been taught that men are the enemy and that anything patriarchal is bad. Any sign that the Church is caving in to such thought is unmasculine, compromising and unworthy of our Church. And those signs are all over the place.