IN THE 1970'S THE DOOM AND GLOOM FROM WEATHER OBSESSED PEOPLE WAS THAT WE WERE CAUSING AN ICE AGE WITH ALL THE SMOG AND POLLUTION KEEPING THE SUN OUT! I KID YOU NOT!!!!! 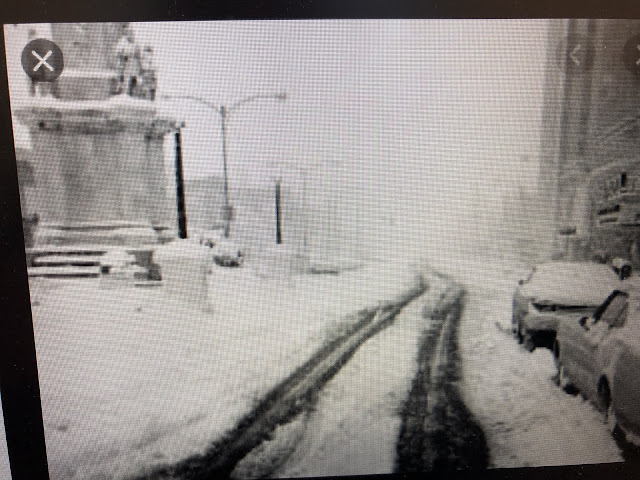 On February 9/10 of 1973, my home town of Augusta, Georgia was hit with a blizzard, the likes of which had never been experienced in the south! This street is Broad Street in downtown Augusta and about a block up on the left is Davision's Department Store a southern branch of Macy's where I worked at the time.

To the immediate left but the top not visible is Augusta's Confederate War memorial for our Confederate dead who sacrificed their lives for their new country. Secular puritans want these things removed all over the country.

I entered the seminary in 1976 and experienced the most severe winters in recorded history in Baltimore in 77, 78 and 79. And yes, the pundents  were saying back then that we were causing a coming ice age!!!!!

We had to repair it! And evidently we outdid ourselves as now it is Global warming we caused! Oh my!

Father, I can provide some corroboration. For an undergraduate political science class in 1977, I wrote a research paper on man’s possible impact on the climate. Experts of the time were divided on which effect was going to have the biggest impact – increased pollution dust leading to global cooling or increased CO2 levels leading to global warming. Doomsday scenarios were predicted by both groups. For those predicting global cooling, the loss of food production from less favorable climate was a primary concern.

There actually was a sci-fi novel out in the 70s, which I did not purchase but only scanned back cover for idea of plot.....which was, it a post-apocalyptic survival tale, where the planet was thrown into an ice age by cleaning up emissions, as it turned out the green house effect was all which had been holding a natural ice age at bay.