HAS POPE FRANCIS BY WAY OF THE SECOND VATICAN COUNCIL BROUGHT US TO THE BRINK OF SCHISM? 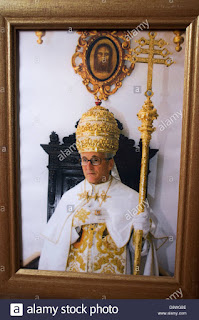 It is clear to me that the two main factions in the Church are those who agree with the direction Pope Francis is bringing the Church in these last five or so years (not the scandals part). He wants an inclusive Church which forgives everyone and makes a place for them, Catholics and Protestants alike, at the "table" of Holy Communion. He wants sex and the type of sex (hopefully consensual) left to the private conscience of people and their confessors.

He doesn't want to exclude anyone who is baptized (and maybe even the unbaptized eventually) from receiving Holy Communion.

I feel that majority of post-Vatican II Catholics, who actually attend Mass on occasion, would follow Francis unreservedly in all of this.

The small minority of post-Vatican Catholics who want the Church as Pope Benedict was leading it, in continuity with the pre-Vatican II Church is the other group. They want to interpret Vatican II in continuity with the pre-Vatican II Church not in rupture with it as Pope Francis interprets things today, telling everyone that this is a result of the Holy Spirit and the God of surprises.

What is important to remember is that Schism as defined by the Church is separating oneself from the Supreme Pontiff and going it independently of him, such as at the Great Schism.

We have a small semi-schism with the SSPX, but not fully like the full schism of the Orthodox.

What do you think the SSPX and those of us who go to the SSPX are doing?

And, I agree with your suggestion of going "underground" should that occur and where rupture prevails until such time that the Holy Spirit leads the Church back to Peter's Rock.

Marc, I would never consider the SSPX unless and until it is brought into the Church as a prelature of some kind similar to the Ordinariate.

If I want a Latin Mass, I will celebrate it.

I do not find the OF Mass off-putting although I would like it to resemble in spirituality and reverence the EF Mass.

I would be happy to stay as I am and let the cards fall where they may.

Marc, in addition, you comment confirms that those who want the Church to be more like the pre-Vatican II Church are a small remnant. Otherwise the SSPX would be huge as Bernie Sanders says it. So would all those EF Masses. There would be droves of people at these but they aren't there except as a small minority.

Well the Francis already said he may very well split the Church, so it seems it's going according to some plan of his and others.

I for one will ride this storm out. I am not in accord with HFPF. Those that I know and surround myself with are probably 70 - 30 in favor of all he is about. Clergy will NOT voice their personal opinions if anything but supportive of him but many I know are not. The "live and let live" philosophy is firmly in play at this point....sadly. If we believe that God through the Holy Spirit is in play here, I'm confused or missing something. I don't understand what is happening...

Fr. McDonald, Just as you think the pope is perhaps in the process of leaving you in the dust, my thought is that the popes left us in the dust when they invented and imposed a new mass.

That is why I quoted you and put my own comment. You and I draw different conclusions about what it is for the popes to leave us in the dust and what going to the desert means.

As for numbers, if we’re going to do what the majority does, then we’d stop being Catholic altogether. Even in the Novus Ordo sect, a small minority actually believe and practice. I’m fine being part of a small remnant.

I pray God grant you that particular grace and more, good servant of God and His people!

First of all, the Church is not the Pope. The divine institution given to us by Jesus and guaranteed against the Gates of Hell cannot leave us in the dust. Some members, including those in high places, can err and leave, physically or otherwise, but they are not the Church. The faithful can hopefully "give the errant humans a bath," thus creating some dirty bath water in which they revel, then toss out the bath water - not the Church. We live it, love it and never leave its PWR

The more we see what is going on in the West, the more I wonder who really is in schism!?

Interesting point. I've thought about this many times.

Two days ago, during prayer, I was inspired to read the first chapter of Romans. All I could say is "wow."

I always knew that deviant sexual behavior is wrong, and I know that we should reach out to them for their conversion, but I don't understand why some in the hierarchy think it is okay to affirm them in their weird "unions." Especially after reading this first chapter in Saint Paul's letter.


The idea that there are priests, bishops, and religious engaging in this horrible behavior makes me sick. I pray that all of them who engage in this behavior, and all of those who think it is okay for them to do so, be removed immediately. I pray that they repent of their sins, change their behavior, and learn to obey God in all things.


Let the healing of the Church begin. Lord God, please have Mercy on us all!

I am with you on this.