TALK ABOUT REDEMPTION! FILE THIS ONE UNDER "JUST TOO KOOL!"

I saw this at the New Liturgical Movement!

Some, I am sure, would rather have them sing "Gather us in!"

I would suggest these inmates deserve a PARDON! They could have chosen to ask for the unpardonable, to form a folk group!

You can read the entire post at the New Liturgical Movement by pressing their title below:

Among the various initiatives of the recently rejuvenated Benedict XVI Institute for Sacred Music and Divine Worship, which is under the patronage of His Excellency Archbishop Cordileone and the Archdiocese of San Francisco, the Latin Mass is to return to San Quentin State Prison, with the first Mass scheduled for August 25th. 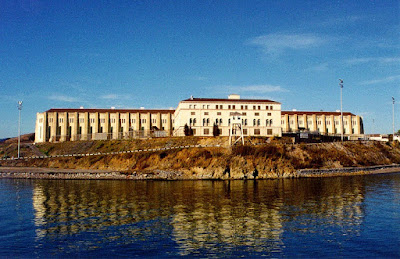 Except Father McDonald, they have been "Gathered In!'


A fitting punishment for these errant cardinals and bishops would be to send them, upon conviction, to San Quentin to receive the most horrible "punishment" of all, being made to listen to a Latin Liturgy with Gregorian Chant. Oh the humanity!

This is awesome! I grew up in the SF BAY Area, and NOBODY wanted to end up there. This may give hope to those who have none!

This is great but, on the other hand, it's too bad that you have to go to prison to be guaranteed good liturgy!

How ironic! We’ve been trying for almost ten years to have a regularly scheduled Extraordinary Form of the Holy Sacrifice of the Mass at the Church of the Most Holy Trinity in Augusta and it’s no problem for San Quentin prison. Perhaps we can get the inmate schola to petition Bishop Gregory John Hartmeyer for the MHT faithful who desire the TLM.