THE HIGHEST NUMBER OF PRIESTS ACCUSED OF ABUSE HAPPENED IN THE EARLY TO MID 1970'S, WITH MID TO 1970'S CONFUSION OF BOTH CATHOLIC AND PRIESTLY IDENTITY

We have to keep in mind that the CARA report which you can read in full HERE, states that the highest number of priests accused of abuse were born in very early 1930's (like McCarrick) but ordained in 1960 or slightly before or after.

Yes, we are speaking of priests who were kept in line by the authority of the Church, of Scripture and of Tradition and of God who after Vatican II had the yoke of others, including God,  telling them what to do, then being told by Vatican II to do what they want to do and enjoy life. With reckless abandon many did that in normal ways, but others skidded off the rails, especially those who got their most up-to-date information from the National Catholic Reporter which encouraged alternative lifestyles that were clearly not of the Catholic or priestly identity sort. We are also dealing with adolescent behavior among priests who let go with adolescent abandon to do all they couldn't do under the more "do what you are told to do" pre-Vatican II Church.

The loss of Catholic identity, be it of the clergy, religious or laity has had a deleterious and disastrous effect on the Church so much so, we are at the brink of "a house of cards" collapsing, the house of cards of the post-Vatican II Church! 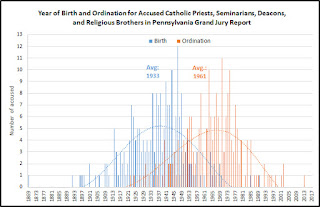 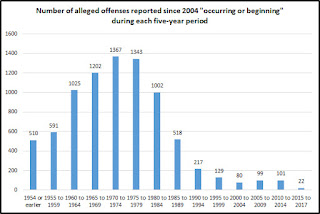 My Aunt was a religious superior of a teaching order in the 1960s. In her view, the problem was that so many of her religious depended on the rules and the structure, so when the changes which brought the individual religious more personal freedom, they couldn't handle it in a mature way and some acted out badly. She said that in retrospect, they should have left the existing order as it was and then created a parallel structure to see how it would work. She often said, "you can't put old wine in new bottles." She was a very wise woman

Alternate interpretation: Vatican II created an atmosphere where people felt comfortable and "empowered" to come forward and make complaints & accusations against their parish priests. In years past, for better or worse, your local priest was a demigod, not to be questioned or challenged. At least not publicly. We'll never know how many young people were abused in years past, but when I was growing up, many parishes had the priest that, conventional wisdom said, you just stayed away from. Often, said priests shifted parishes suddenly, without notice. Nobody would think of going to the newspaper or the cops in the '50s, '60s, '70s, even '80s, because of course, you'd go to hell.

TJM – I like your aunt’s alternative suggestion. It would have helped prevent my mother feeling so alienated from the Church (although the Church’s then hard line on raising children as Catholics, creating a situation preventing my parents from originally marrying within the Church, was also a major contributing factor—their marriage was blessed in later years after my father became Catholic). It might also have provided a control group for the Vatican II liturgical experiment.

Anonymous – I also like your alternative interpretation, at least as a plausible hypothesis.

What is appealing about both alternatives is that they reflect suppleness and flexibility, as opposed to rigidity, of thought regarding non-absolute matters.