DEVELOPMENT OF MORAL TEACHING ON THE ENSOULMENT OF A FETUS: THANK GOD THAT THIS DOOR WAS CLOSED BY POPE PIUS IX IN 1869 BECAUSE FOR HIM TO HAVE KEPT IT OPEN COULD HAVE PROVEN DISASTEROUS FOR THE CHURCH IN THE 20TH AND 21ST CENTURIES. I THANK GOD POPE FRANCIS HAS CLOSED THE DOOR TO CAPITAL PUNISHMENT BECUASE TO KEEP IT OPEN WOULD BE DISASTEROUS IN OUR CURRENT DAY REGARDING OTHER ASPECTS OF THE SANCTITY OF LIFE 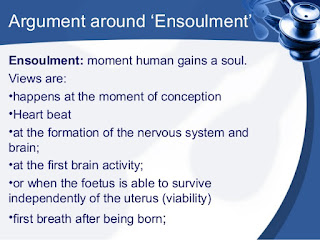 In 1869, Pope Pius IX officially removed the distinction between the animated and unanimated fetus from the penal legislation of the Church

The scholar John A. Hardon, S.J. can write:


The exact time when the fetus becomes 'animated' has no practical significance as far as the morality of abortion is concerned. By any theory of 'animation,' abortion is gravely wrong. Why so? Because every direct abortion is a sin of murder by intent. It is, to say the least, probable that every developing fetus is a human being. To deliberately kill what is probably human is murder.4

The distinction between the formed and unformed fetus (animated and unanimated), though recognized and accepted by many jurists, philosophers, and theologians, was used only for purposes of classification and distinguishing penalties. The first person in the Christian tradition to suggest that the distinction might be used as a basis to justify abortion in special cases is a Dominican, John of Naples (c. 1450). In an unpublished work, the Quodlibeta, John argues that a doctor may and should give the mother an abortifacient medicine if it is necessary to save her life, provided he is certain that the fetus is not animated. This opinion was brought to light by another Dominican, Antoninus, Archbishop of Florence.17 Discussion of this exception occupied the attention of theologians for the next three or four centuries, until theories of delayed animation—on which it was based—became obsolete.

The exception introduced for discussion by John of Naples met with considerable opposition, although it did claim some followers, particularly, the Jesuit theologian Thomas Sanchez. Sanchez' argumentation to justify abortion in certain instances (and when it was determined that ensoulment had not yet taken place) was eventually condemned in 1679 by Pope Innocent XI. A French Jesuit, Theophile Raynaud (1582-1663) was the first author to argue in favor of aborting an animated fetus to save the mother's life. Raynaud's position was unique for his time and had no adherents for the next two centuries.

In the seventeenth century, two scientists—Thomas Fienus and Paolo Zacchia —who rejected the Aristotelian theory of delayed animation, made important historical contributions that led ultimately to the Church's abandoning the speculation that there is such a thing as unanimated (or non-human) fetus.

Fienus, a professor of medicine at Louvain, published a biomedical treatise in 1620 on the formation of the fetus (De formatrice fetus liber). He concluded that the soul is infused on the third day. The Aristotelian notion of a succession of souls or "functions" of one soul (first vegetative, then sentient, and finally rational) made no sense to him. He developed nine lines of argumentation to support his thesis. In general, Fienus argues that the soul must be present at the beginning in order to organize the body. Moreover, in order to avoid an unnecessary multiplicity of explanatory factors, there must be one soul from the beginning that establishes the specific unity and individual continuity of the developing embryo.18

In 1869, Pope Pius IX officially removed the distinction between the animated and unanimated fetus from the penal legislation of the Church. This was, of course, disciplinary and in no way involved Church teaching on abortion.20 Henceforward, every direct killing of human life after conception would be treated in the same way, that is, the penalty of excommunication applied to all abortions.
Posted by Fr. Allan J. McDonald at Friday, August 03, 2018

Breaking news! Hell is "an attack on the inviolability and dignity of the person," and the concept must be reexamined.....

I'm ready to close the door on this epoch of the Church.