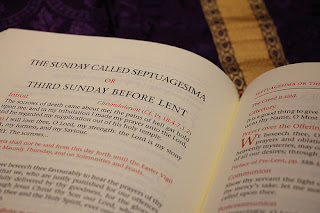 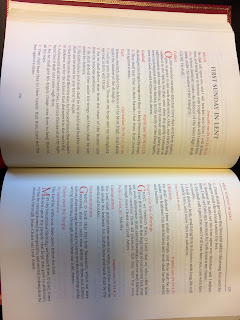 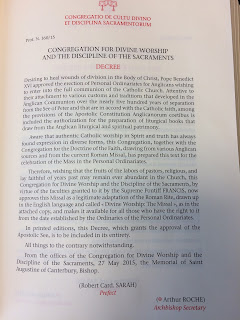 I still don't get it! I am the only one who points out that the Ordinariate's Roman Missal is a masterpiece of a template for the revision of our now outdated Ordinary Form Missal of the Roman Rite. No other liturgical blog highlights this or promotes Holy Mother Church through Cardinal Sarah and Pope Francis to revise our missal accordingly!

And better yet, it was His Holiness, Pope Francis who signed off on it and his signature is in this splendid Missal.

There is nothing really radical that needs to be done to the normal Ordinary Form Roman Missal except to make it look more like the Ordinariate's as you can see in the photos above.

Certainly, I am not asking for the "Anglican" usage that is in that Missal.

But it is patently unfair that the Ordinariate's Missal gets elements of our very own EF Missal and the majority of Latin Rite Catholics do not have the same access. It is unjust and immoral!

The propers of the Missal include on each page of every Mass the traditional format of the Introit and the Latin name for the Mass based upon the first words of the Introit.

Included is the Offertory Antiphon which is not in the current OF Missal at all for some peculiar reason--although it exists in the Roman Gradual.

In the appendix of the Ordinariate's Missal is the EF's Form of the Asperges/Vidi Aquam as well as the Prayers at the Foot of the Altar which allows for the EF's order to the "Introductory Rite of the Mass."

The ancient form of the Offertory Prayers is a clear option as well. Only two Eucharistic Prayers are in this missal, the Roman Canon and Eucharistic Prayer II. And the rubrics for the consecration of teh bread and wine are the EF's rubrics with the addition of a genuflection after the Per Ipsum and Great Amen!

The Mass may be celebrated ad orientem from beginning to end.

It is clear in the Missal that the Gradual/Tract may replace the Responsorial Psalm in the lectionary.

Holy Communion may be given to kneeling communicants.

There is nothing else that needs to be changed in our normal Roman Missal except the calendar which the Ordinariate has revised to be more similar to the EF Mass (and presumably to the Anglican tradition of such.).

I STILL DON'T UNDERSTAND WHY LITURGICAL BLOGGERS COMPLETELY IGNORE THE ORDINARIATE'S MISSAL WHICH POPE FRANCIS PROMULGATED AS A WELL TO MOVE THE ORDINARY FORM LITURGY TOWARD "RENEWAL IN CONTINUITY." LET'S STOP USING THE TERM "REFORM OF THE REFORM."
Posted by Fr. Allan J. McDonald at Friday, March 09, 2018

Just reading this now. I know that CTS is publishing a study version of Divine Worship, The Missal in a smaller size (like the Daily Roman Missal). Does this Missal, in general, contain all of the texts for the readings of the year? That would be nice as I attend this Mass and would love to have a hand missal.

Firstly, the Offertory prayers in the Ordinariate missal are not 'ancient' - they are taken from the Tridentine rite and are different from those of other uses, for instance the Dominican. The greatest flaw in the NO Offertory is the omission of the 'Suscipe Sancta Trinitas' which occurs (with not necessarily the same words) in older rites.

Yes, the Ordinariate was allowed to retain certain elements of the traditional calendar (e.g. Septuagesima) but they are still tied to the 1970 Lectionary which embodies the reforms of Bouyer's 'trio of maniacs' and cannot be separated from the revised calendar.

Also, few Catholics, and even fewer Anglicans, are likely to encounter the Ordinariate missal. I could attend it in Oxford on a Saturday evening, but on a Sunday morning in the same city I can attend the EF (sung or said) and the OF (sung in Latin). So why should I bother with it?

Father, do you honestly think that anyone would consider using the Ordinate Missal as a template for the poster child for experimentation, the Roman Church? To me, it is never mentioned as, probably, most acknowledge this theoretical reality and, going back to your Church Geek analogy, only a small minority would be interested. Imagine the wailing and gnashing of teeth in more progressive parishes and among the libs if this ever were to happen. The REAL Church, Father, is now focused on Eucharistic Centers because, remember, Father, it'll be better that way, more vibrant.

Father, I am no theologian or liturgical expert but I agree with you that this Missal far surpasses that of the NO Missal. And yes, what little I know of the intentions of the Fathers of the Council, I would say that this Missal is what they intended.