STANDING OR KNEELING FOR HOLY COMMUNION, ON THE HAND OR IN THE MOUTH? WHICH ARE INTRINSICALLY MORE "REVERENT" LOOKING--APART FROM INWARD DISPOSITIONS WHICH CAN'T REALLY BE JUDGED? 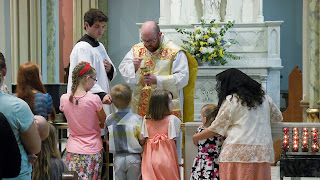 At His Holiness Wednesday catechesis on the Mass, this is what the Holy Father said about the reception of Holy Communion:

According to the ecclesial practice, the faithful approach the Eucharist normally in a processional form, as we have said, and, standing with devotion or kneeling, as established by the Episcopal Conference, receive the sacrament in the mouth or, where permitted, in the hand, as preferred.

What is interesting is that Pope Francis had to add the codicil standing with devotion  to the standing part, but not to the kneeling part. Why? Because kneeling is intrinsically more devotional and automatically so, than is standing (from the external viewpoint).

On top of that anyone who watches so-call Communion Processions, will note that externally the kneeling position looks far more reverent and with devotion than the standing position which looks like a chow line, and people constantly on the move with no time to actually reflect in a devotional way on Who it is they have received on the spot.

Add standing and receiving on the hand and a whole host of other problems (no pun intended) occur to the wrong ways to receive in the hand, to moving hands, to adults and children popping the Host into their mouths or bringing the Host back to the pew to share, adore or drop on the floor or bring home as a good luck charm or for a Satanic black mass.

Some wise guy wrote the following:

In placing the emphasis where he does, Francis is also following the logic of the reformed liturgy, which quite consistently pruned away from the Tridentine liturgy later medieval developments and returned to a form more like the practice of the Church’s first five or six centuries. The Church has made it rather clear, in the way the liturgy was reformed after Vatican II, that the Church does not hold the late medieval developments to have been entirely for the good.

Well, what's good for the goose is good for the gander! A future Council of the Church can imply that "the Church does not hold the post Vatican II developments (on the Liturgy or how to receive Holy Communion) to have been entirely good!

Read my lips - there is no such thing as the 'Communion procession', any more than I can say I am 'processing' to the check-out in my local supermarket. It also assumes that everyone, whether in a state of grace or not, whether in an irregular relationship or not, is going to troop up to receive.

Secondly, standing or kneeling is not something which is decided by episcopal conferences. They may permit the former (in NO masses) but may not prohibit the latter.

"The Church has made it rather clear, in the way the liturgy was reformed after Vatican II, that the Church does not hold the late medieval developments to have been entirely for the good."

As Ratzinger wrote (Spirit of the Liturgy), it was not the Church that reformed the liturgy but the so-called "experts." He lamented that the task of renewing the liturgy was handed over to the "experts" instead of the Church.
I should add, that Paul VI just rubber stamped what the experts (i.e. Bugnini) gave him to sign, by hook or by crook. After all, the experts knew everything about the liturgy, so what was the non-expert Paul VI to judge?

Agree with John. We line up for communion, we don't process to it. In the Byzantine Church, the norm for reception is head tilted back, mouth open with tongue remaining in mouth. Like myself, most follow the tradition of crossing their arms, right over left, with some having their hands folded. Father drops a portion of the consecrated bread and wine into each communicants mouth while saying: "Servant/Handmaid of God (name) receives the most precious etc..". We do not close our mouths around the spoon as is done in other Eastern Churches.

My point, reception on the tongue is easy to implement and would eliminate most profanation. For the Roman Church, kneeling at the communion rail is preferable however, in many places this obviously would be difficult without rebuilding or, making some other accommodation. Perhaps the easier "win" should therefore be pursued in the first instance.

What is it about the Church's first, fifth or sixth centuries that is superior to later centuries?

Supporters of the Roman liturgical tradition do not advocate a rite that is frozen in time, but rather the traditional manner of liturgical development which is slow, organic, tested.

Fr: Regarding the new masthead of Benedict XVI, without question, THAT is exquisite!

Rood Screen, They had Paul, Augustine, and the Fathers. We have the New Hermeneutic, form and redaction criticism, and Kavanaugh.

We Orthodox stand while receiving the Eucharist, however, we do this by intinction and with our arms folded across our chest. It can be done recverently. The problem is, in your typical Latin parish it’s not, it’s like a fast food line